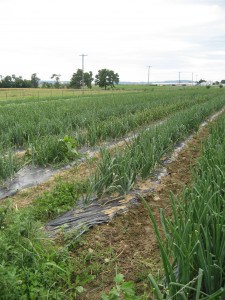 ustainability that he’s applied to his family farm, including a field rotation cycle of 18 years, in contrast to the Biblical seven years, culminating with the shmittah year.   This involves a series of conversations that has not ended, but I wondered what is in the Jewish tradition that is relevant to a holistic approach to our land?

The Torah details a way we should approach the land.  First, God created Adam and placed him in the Garden of Eden to “work it and to guard it.” [Genesis 2:15] And there is the negative mitzvah (commandment) of bal tashchit, which is against wanton destruction [Deuteronomy 20:19-20], but there is also a specific chuk (unexplained decree) of kilayim, the prohibition on cross-breeding animals or mixing the seeds of different plants.  The Torah states:

You shall observe My decrees: you shall not mate your animal into another species, you shall not plant your field with mixed seed; and a garment that is a mixture of combined fibers shall not come upon you. [Leviticus 19:19]

You shall not sow your vineyard with a mixture, lest the growth of the seed that you plant and the produce of the vineyard become forbidden. You shall not plow with an ox and a donkey together.  You shall not wear combined fibers, wool and linen together.

Religious Jews observe the latter part of this chuk by not wearing garments woven with a mixture of wool and linen (shatnez), but is there a broader environmental message for Jews?

Mixing together animals of different species by yoking them together for hard labor causes pain when they attempt to work at their different strengths.  Mating animals of different species causes pain maybe on a cosmic level, resulting in sterile offspring.  Whereas Jews are permitted to derive benefit from plants and animalsâ€” killing them for our useâ€”we are not allowed to cause the extinction of an entire species.  The Ramban in his commentary to the Torah wrote about the prohibition against killing a mother bird and its young on the same day [Leviticus 22:28], because it is as if we have destroyed that species.

What about the problem in the mixing of plants?  Ancient farmers have long practiced grafting (a technique whereby material from one plantâ€”chosen for its stems, leaves, flowers, or fruitâ€”are inserted into those of another plant chosen for its sturdy roots), which is an early form of genetic modification.   While Jews are allowed to graft and to derive benefit from it, they’re not allowed to plant the resulting seeds.  Sorry, Monsanto (the largest producer of genetically modified seeds in the United States), but religious Jews shouldn’t buy your seeds!   The prohibition of kilayim does not extend to crop rotation (crops planted in sequential order in the same field) or even neighboring crops chosen for their ability to ward off pests or attract bees.

The Ramban noted that the fruits of mixed-breeding are sterile.  This means that farmers who “once relied on saving and sharing seed from season to season are now forced into buying new hybridized seed each year,” writes Stacia and Kristof Nordin on their website, www.neverendingfood.org, from Malawi, Africa.

According to Akiva Wolff, author of Jewish Perspectives on Genetic Engineering for the Jerusalem Center for Public Affairs: “Many halakhic authorities take the position that there is no prohibition of kilayim in the genetic engineering of plants unless the material being transferred from one species to another has the ability, if planted in the ground, to grow a complete plant on its ownâ€”and this is seldom the case with genetic engineering.”

The moral lesson for kilayim seems to me different from that for kosher (meshuval ) wine, which was boiled to render it unfit for idol worship, thus keeping Jews from fraternizingâ€”another form of mixingâ€”with others.   Kilayim seems to be about not usurping the divine role of creating or annihilating species.  We can be God’s helpers, as gardeners and farmers are in bringing life from the earth, but we do not take God’s place.  In some ways, the Torah makes agricultural sense, as shmittah, the year of rest for the land.   And farmers know that it’s much easier to weed, prune, and harvest a single crop in a plot of land.  The Green Revolution of the late 1960’s helped eliminate famine in places like India and the Philippines, but the sad reality is that the farmers are indebted to the corporate producers for genetically modified seed.  And another drawback to these new varieties of crops is “their reliance on chemical fertilizers and pesticides to ensure the success of a harvest,” notes the Nordins.  Perhaps the simple and natural approach is the more sustainable, enduring, and replenishable one as expressed by the Torah value of kilayim.

Hannah Lee writes from her home in the Main Line suburbs of Philadelphia. She credits her friend Lindsay Gardner for the question that led to this article.

[Newsletter] March 22 – New (Goat) Kids on the Block
Food Stamped: Screening and Q and A with the Filmmakers