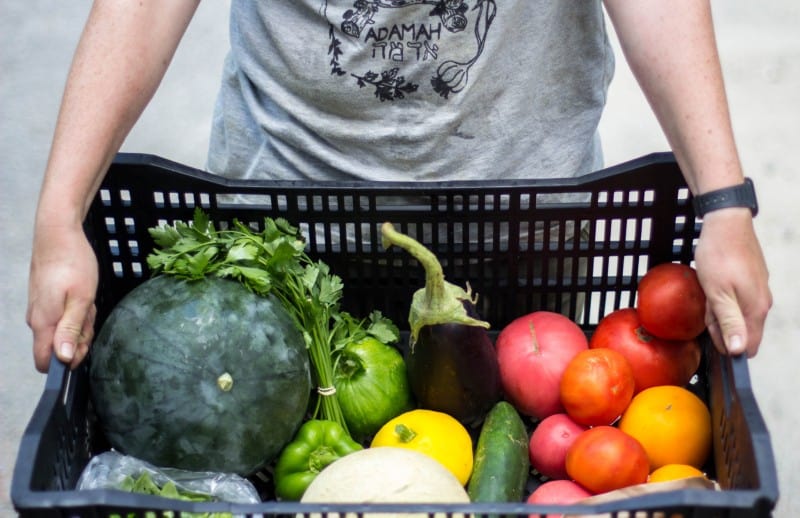 This week’s sidra, Eikev, is the week that introduced into English (via the King James version)  “man does not live by bread alone” and “a land flowing with milk and honey.”  It’s the week that lists the seven species – shivat haminim – that are indigenous to the land of Israel, which Bill Slott points out to me every few years as we ride from Jerusalem to Ashkelon on the first day of the Arava Institute Hazon Israel Ride. And it includes the second paragraph of the shm’a, linking our behavior to the climate of the world.

Food is a recurring motif. Perhaps that was why Ruby Rivlin, President of Israel, chose this week to spend the day helping Leket pack food for people in need. As Joe Gitler subsequently wrote, President Rivlin wasn’t just doing a photo-op. He’s seriously engaged by the topic and thinking hard – and striving to put the weight of his office – behind new ways to help get food to people who are food insecure.

But you don’t have to be President of Israel to make a difference. “Pivot” and “swivel” are words-of-this-year, and they encapsulate two particular Hazon pivots in relation to food and people in need.

In Detroit, Wren Hack and our team there have done extraordinary work in relation to food rescue; and similarly, in the Interdependent Republic of Housatonica, Shamu Sadeh and Janna Siller and our Adamah team have also pivoted. I wanted this week to shed light on their work, and to invite us all to strive to do more on this going forwards.

At Adamah, Shamu and Janna came into the spring season with no prospect of a cohort of Adamahniks – but a fruitful sadeh (field), and the knowledge that (sadly) there are people in need in every community in this country. Together with first Rebecca Bloomfield and then Carly Sugar and our three apprenti, Deena Blum, Noah Wolf-Pruzan, and Dahlia Herzog, they have grown a bounteous harvest. Our CSA in Falls Village provides sixty-eight families with fresh, organic vegetable shares regardless of financial capacity, and in addition we have donated forty CSA shares individually packaged once a month for seniors living at Tuscan Brotherhood Homes on the north end of Hartford, another dozen weekly shares for seniors at the Falls Village Senior Center, and over two thousand dollars’ worth of bulk vegetables donated to Friendly Hands Food Pantry, a food bank that addresses emergency hunger relief in Torrington.

Meantime, in Detroit, Wren Hack and our staff there first started to engage seriously with these issues at the time of the JCC Maccabi Games last year. These were the first-ever Games internationally at which, because of Wren and her team, there was consistent food composting – and the delivery of leftover food to people in need.

So Hazon Detroit was there when Covid kicked in, with a slew of relationships on the ground. Wren quickly realized that, despite a significant infrastructure of food banks and food pantries, there were, in fact, huge holes in the system. Food that couldn’t be distributed. Food in the wrong places. Food that was not culturally appropriate for particular communities.

Hannah Fine picked up the phone to find out who had food they couldn’t use and who needed extra food, she spoke to distributors and caterers. Wren liaised with the local leadership of Food Rescue US. And they dove – and drove – into action. All the way through they have kept a detailed spreadsheet of all this. 55,475 lbs of food redistributed. 29,573 lbs rescued. For a combined total of 40 plus tons of food.

I want to add that this is within Hazon; these are people I work with. But this is happening across the JOFEE space. At Coastal Roots Farm in Encinitas, at Ekar Farm in Denver, at Milk and Honey in Boulder, at Pearlstone Center, at Shoresh… The JOFEE movement these last 15 or 20 years has reconnected Jewish people with land and soil, it has renewed Jewish life, it has fostered Jewish leadership – and it has also taken our ancient tradition of tzedakah, of doing that which is right, literally back to its roots.

And at this time of weirdness and dislocation and disruption, I can hear the honest pride in the work of our staff as they are bringing to life the behaviors that the Torah enjoins. You may read the parsha each week, or you may not; you may indeed grow food, or you may not. But Jewish life literally makes no sense if we fail to understand not merely that we entered human history as an indigenous people, with a deep and visceral connection to land and food, but that Jewish tradition constantly – constantly – threads backwards and forwards between food as something that is miraculous and G!d given, and food as that which requires our ongoing attention to foster fairness and goodness in the world – food as the thing that keeps people alive.

So thank you not only to Wren and to Janna and to all the people at Hazon directly involved in getting food to people in need; thank you also to everyone who is involved in this work, within and beyond the Jewish community. Localism, urban food production, addressing food sovereignty – this is how we build resilience into the fabric of our communities. Just a few years ago, Becca Weaver – one of our Adamah alumni – founded Milk & Honey farm at the JCC in Boulder. Shouldn’t every JCC be growing food? Shouldn’t every Jewish schoolchild (and every non-Jewish schoolchild) learn how to grow food as part of the essential curriculum of becoming an educated human being?

Finally: I thank those of you who are helping to support Hazon; we truly need your support in this difficult year, and I especially thank everyone who has already signed up for or donated to our 2020 Vision Rides. And yet giving is not either/or; we all of us support multiple good causes. And so feel free, if you would like, also to donate to the Adamah Covid Hunger Relief Fund, which indeed provides relief to those who may be hungry.