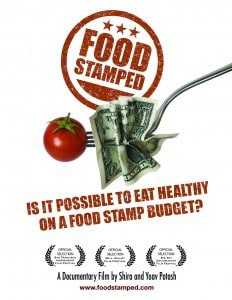 All ticket proceeds will be donated to Hazon.

Food Stamped is an informative and humorous documentary film following a couple as they attempt to eat a healthy, well-balanced diet on a food stamp budget. Through their adventures they consult with members of U.S. Congress, food justice organizations, nutrition experts, and people living on food stamps to take a deep look at America’s broken food system.

“Food Stamped is a warm, delightful, and entertaining film with a serious message: it’s really difficult to eat healthfully on food stamp (SNAP) benefits even if you are educated, savvy, live near a decent grocery store or farmers’ market, have plenty of time and energy, and are a great cook.  Everyone should see this film, especially those who complain about how low-income people use their benefits.”

Shira Potash is a certified nutrition educator with a Masters of Science in Community Health Education. She is currently a project manager for Kaiser Permanente’s national employee wellness program, Healthy Workforce. In her private nutrition practice, Sprouts Nutrition, Shira works one-on-one with clients of all ages to guide them towards optimum health.  FOOD STAMPED is her first film.

Yoav Potash recently produced and directed CRIME AFTER CRIME, a documentary about the legal battle to free a victim of abuse from a California prison. CRIME AFTER CRIME premiered at the Sundance Film Festival and has won 20 major awards, including the Audience Award and the Golden Gate Award for Investigative Documentary Feature at the San Francisco International Film Festival.  For his advocacy, Yoav was the first filmmaker to be honored by the California Women’s Law Center with their Pursuit of Justice Award.