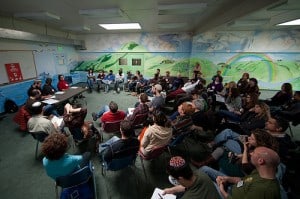 An estimated 100 billion pounds of food, enough to totally eliminate hunger, is thrown away annually in the United States. How much of that wasted food comes from Bar and Bat Mitzvahs?

Jews are clearly not the only ones responsible for food waste in this country, but an awful lot of Jewish energy goes into tackling issues around hunger, food justice, food access. Perhaps it’s Maimonides’ legacy of tzedakah, perhaps its our Jewish grandmothers encouraging us to eat, or perhaps its because of the calls to look out for the “stranger, the widow and the orphan” that are woven in to the agricultural practices of the Torah and form the foundation for civil society.

Hazon’s Food Conference, which explores the broad realm of Jewish food traditions against the backdrop of our contemporary food system over four jam-packed days, will be delving into issues of food justice in great detail this year. To help us craft these amazing conversations, we’ve partnered with Pursue: Action for a Just World to bring food justice leaders from all over the country to the Food Conference at UC Davis in August, including: