After the completion of ten weeks of exposure, enlightenment, and heavy back breaking work, Tania and I find ourselves longing for our internship to continue on into 2021. By working with Hazon and other partner organizations and leaders in the community, we have become a part of a community of compassion — centering the needs of hundreds above their own. In this work across the city of Detroit, we’ve met individuals who consistently leave us in awe with their unwavering dedication to food rescue. This week we want to highlight the gift of Darraugh Collins. Despite only residing in Detroit for several years, she has made an enormous impact on the community. 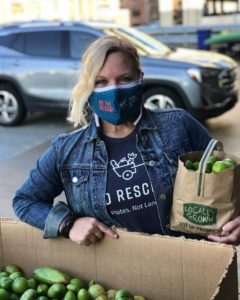 Darraugh was not always a leader in the work of food rescue; after attending a banquet at her fiance’s hotel in St. Louis, she noticed the immense amount of leftover food. She was shocked that it was all going to be thrown away. This made her wonder: How many people had she passed on the street who could have benefitted from this food? How many hotels and businesses in the area also disposed of surplus food? It soon became clear to Darraugh what the next step must be: distributing the overages to those in need.

A few years later — now living in Detroit — Darraugh remembered an app that she had previously come across, Food Rescue U.S. Food Rescue U.S. is a solitary volunteering experience that delivers food to those in need, and it operates on a platform similar to DoorDash or Grubhub. This allowed for nonprofits to utilize individuals to decrease food waste while taking the weight off of hospitality industries like hotels. Darraugh saw this as a perfect opportunity to find her place in Detroit while getting to know others who shared her vision on food waste and community partnership. However, at the time, Food Rescue U.S. did not yet exist in Detroit, allowing Darraugh the chance to follow her dream and began a chapter in her new home city. After a year of conversations with Food Rescue U.S. and donor outreach, things began to come together. Her fiancées hotel in Detroit became her first community partner, creating a heartwarming synergy. Working mostly on her own with a several friends by her side, things began to take shape.

When Covid hit Michigan in March 2020,donations slowed down. This situation was amplified as Darraugh was faced with an even more pressing need for food distribution, as the pandemic left many jobless and food insecure. Without missing a beat, Darraugh shifted her operation and began an impressively busy system of food delivery at the TCF center in Downtown Detroit. Darraugh has spent the last 26 weeks, alongside dozens of Food Rescue U.S. volunteers, at TCF on Friday mornings, distributing an incredible 3.4 million lbs of food.

Though originally the nonprofit worked through an app allowing for solitary work, Covid allowed for the opportunity of building community by feeding the community. With people of all ages and backgrounds masked up in rain or shine, Food Rescue U.S. Detroit delivers to over 65 receiving agencies, with 50 separate donors, including USDA boxes. As a nonprofit, they must fundraise and apply for grants to receive funding on a state and national level, leaving most of the work to passionate local leaders. Relying heavily on building strong personal relationships, Darraugh worked tirelessly to attain her current donors. Additionally, the question of educating businesses, ensuring it is a safe process of food distribution, and changing the operating procedures for grocery stores often fell on Darraugh. This was not accomplished by one simple phone call, but many calls, as well as in-person conversations and nudges to bring about a wide range of donors reaching thousands across the city of Detroit. 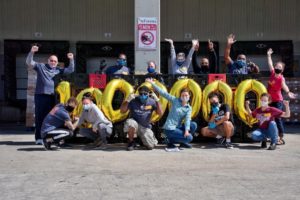 Other challenges Darraugh and her team face are transportation and time. They may get an order of 1,000 egg cartons or other large amounts of food, leaving one driver with too many packages on their hands for one vehicle. Though there are many drivers who volunteer, Food Rescue U.S.Detroit hopes to raise funding for a vehicle or partner with someone who has an accessible vehicle.

However, the most pressing challenge is the need to get fresh food to people before the food is no longer healthy for consumption. Darraugh hopes to create a system of refrigerated solar powered food hubs throughout the city of Detroit made from shipping containers. This would allow for closer access to distant donors, getting the food out at an even faster pace. Darraugh focuses on the needs of the agencies she works with, and with these community hubs, it buys not only time, but storage capacity for agencies and Food Rescue U.S. Detroit alike.

During these many months of Covid, Darraugh and her team have been able to distribute large quantities of food through the USDA program food boxes. However, there will come a time when this program ends, leaving a gap in the momentum of the food rescue effort in Detroit. Yet Darraugh is prepared to move forward with her growing team of volunteers, continuing to bring local restaurants in as donors once they are back to business as usual and widen the scope of education around food insecurity and waste. Though Food Rescue U.S. Detroit hopes the USDA boxes will continue through the spring, they know with their solid relationship with TCF and well created app, they will continue to help change the broken food system in the U.S., regardless of circumstances. 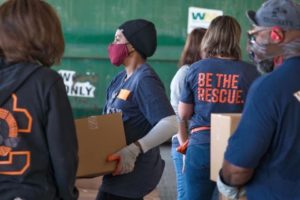 Darraugh Collins created beauty out of devastation, building up a community of kind and generous individuals doing everything they can to support one another. If you show up to TCF on Friday mornings, you will be greeted by the aroma of homemade treats and warm faces. Vehicle after vehicle come as boxes are loaded in and taken to churches and food banks all across Michigan. When Tania and I became a part of the team in October, it shocked us to learn this operation had only begun in the past few months. The mornings move swiftly and professionally — with a sense of affection that we didn’t expect just after sunrise. We asked Darraugh what she would tell others interested in food recovery work, and she told us the same thing we were told on our first day: it is all about relationships. It is essential to find those doing similar work and together build a community. Detroit is a big city, and no one can do this alone. When you have strong and trusted relationships in the community, you always have someone to call when something goes awry. This way there is no fear that someone may no longer be able to attain food, for there is always someone to help in the food rescue community in Detroit. As Darraugh says, “We need to break down the silos and work together.”

Bo: Hyssop – The Paintbrush of Liberation, by Rabbi David Seidenberg
Thoughts on this Tu B’Shvat