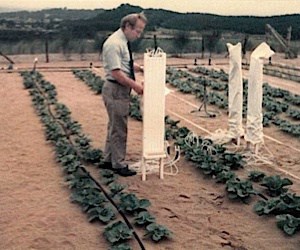 I first read Daniel Hillel’s Out of the Earth in college; it was a primer on the transition from semi-nomadic to agricultural societies, the connections between seasons, weather patterns, and local deities. It inspired my senior thesis on the “Theological implications of rain-based agriculture.” Needless to say, I was thrilled to hear that Hillel, now 81, won this year’s World Food Prize for his work on irrigation.

You can read the full article about Hillel by Renee Ghert-Zand’s on The Jew and the Carrot. One paragraph caught my attention in particular:

[Hillel’s] nomination for the World Food Prize included seconding letters from Arab scientists and experts living and working in Egypt, Jordan and the United Arab Emirates. He is a remarkable example of what one person can achieve by taking a leap and crossing cultural borders for the sake of the greater good.

Just like the folks at the Arava Institute for Environmental Studies (our partners for the Arava Institute Hazon Israel Ride who work across political boundaries to address environmental issues that concern the region – forging cooperation and partnership between Jewish-Israelis, Arab-Israelis, Palestinians, Jordanians, and Egyptians), Hillel’s work transcended political borders. It’s another example of how a focus on a particular environmental or food issues – such as the Farm Bill, or low-drip irrigation – or even simply supporting local farmers through community-supported agriculture – can bring people together across difference, and start conversations that have much broader effects. Yasher Koach!

Anna Hanau is the Associate Director of Programs at Hazon, and co-authored “Food for Thought, Hazon’s Sourcebook on Jews, Food and Contemporary Life.” She and her husband founded a kosher pastured meat business called Grow and Behold, and keep a flock of chickens in her backyard in Brooklyn. In accordance with Hazon’s conflict of interest policy, Anna does not work on Hazon’s meat or meat-related projects.

daniel hillel, irrigation, out of the earth, world food prize

Photos from the Beach!
[Cross-USA Ride] Recap – Week 2 From Spokane to Helena