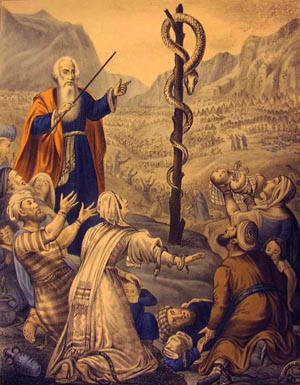 Look upon this serpent and be healed (?) | source unknown

As I write this post, I sit in my office in Atlanta with the threat of rain clouds to my left and blueberry waffles, coffee, and a coworker’s copy of the Tanakh (Hebrew Bible) to my right. Georgia’s summer has been very wet thus far, and the promise of the coming downpour outside my window sets a looming melancholic tone for this week’s cinematic Torah portion: Chukat (Numbers 19:1-22:1).

Much happens in the chapters of Chukat. In the interest of brevity:

In other words, when it rains, it pours.

In many regards, the verses within Chukat remind me of an episode of Game of Thrones. Two main characters die in quick succession; divine (and bovine) magic makes several appearances; resources and morale among the people are running low; and death is referenced so many times that G-d decides we need rules on how to go about purifying ourselves after coming into contact with it.

Yet, through all of this, Moses leads Israel to victory verse after verse. Reads like an Emmy award-winning screenplay, no?

As if to prove a point, it starts to drizzle outside my window.

I can’t help but marvel at the fact that this portion fits so smugly between the summer solstice and America’s Independence Day; annual tent poles that warrant celebration of both the natural cycle and the modern (wo)man’s will to overcome oppression. I can almost imagine Moses superimposed at the bow of a small boat pushing across the Delaware to an uncertain and illogical (yet preordained) victory.

All of the JOFEE work that I do is shaped by my professional involvement with Birthright Israel and the alumni who have participated in this tremendous program in years past. Birthright Israel trips are essentially one large 10-day JOFEE program. They’re full of soulful reflection, sprinkled with rich personal discovery, sitting atop a cone of Israeli culture, and garnished with lifelong friendships and memories. The land of milk and honey is chock-full of important environmental lessons, and I am very thankful that I’ve been given the opportunity to slap my participants with some much-needed JOFEE knowledge. 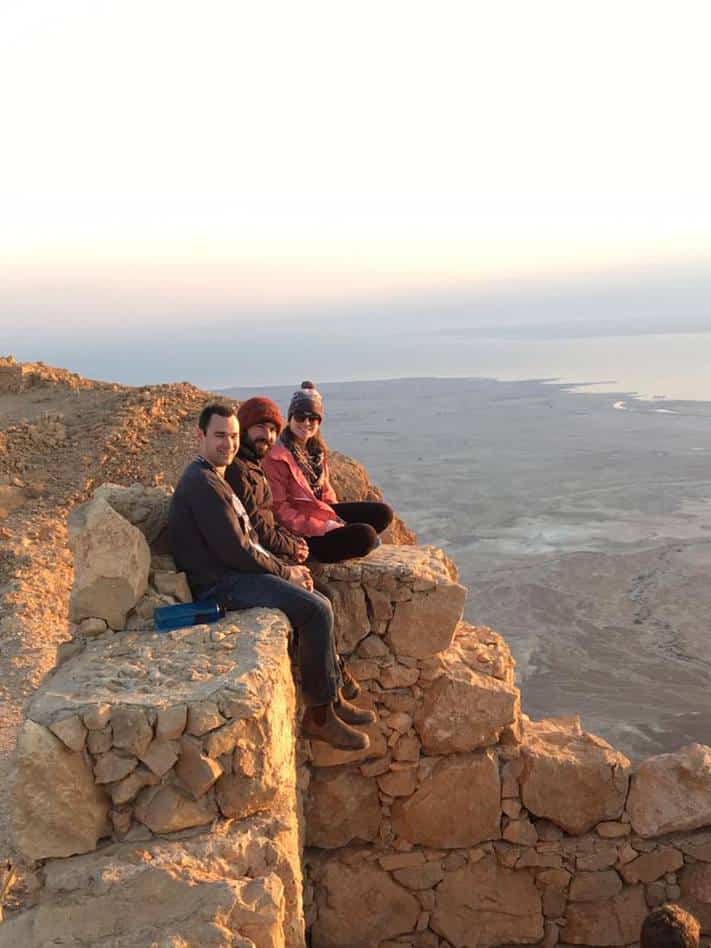 Organizationally, most of my day-to-day responsibilities involve keeping Birthright Israel alumni engaged in the larger Atlanta Jewish community. Traditionally, I’ve done this through small group reunions, recurring educational series, and huge 500 person blow-out events. Since becoming a JOFEE Fellow in February, I’ve begun reworking my programs so that the events I produce reflect the core JOFEE values of earth-care, people-care, and fair share.

I’ve found that rewiring my brain when stateside is no easy feat. I struggle with deciding how to add JOFEE content to my Atlanta programming in a natural way, and I often worry that my target demographic (young professionals ages 22-30) simply sees these efforts as a heavy-handed way of telling them to recycle their beer bottles at the next happy hour. It’s so much easier to talk about the core principles and ethics of JOFEE and our work as Fellows when standing in the middle of a kibbutz or under the stars in the Negev. How do I infuse a young adult mixer with similarly meaningful and enriching content?

Perhaps turning back to Chukat will yield some insight.

On a personal level, my experiences this summer mirror Chukat with eerie accuracy. Two close family members died in quick succession, my family observed the yahrzeit of a great leader (my maternal grandfather), our country remains divided, and we’ve all been inundated by many stories of preventable human loss of life. I think the only thing that’s missing is my being bitten by a snake over the holiday weekend. 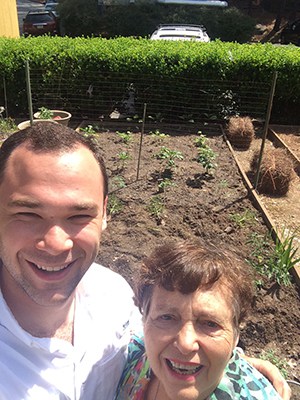 Bringing it home: Ryan Kaplan (left) with his grandmother, Esther Solomon, after a hard day’s work in her garden plot | photo: Ryan Kaplan

For the uninitiated: Following Aaron’s death at the summit of Mount Hor, the Israelites continue to wander through the desert. After a while they begin to get antsy and speak out against Moses’ leadership and G-d’s plan for the nation. To punish them for doubting his/her methods, G-d unleashes a plague of serpents and “many of the Israelites died” (Numbers 21:6).

Funnily enough, out of all the hardships endured by the Israelites in this parsha, I find that this “plague of serpentine aggression” and the subsequent solution mentioned are quite relevant. In researching Chukat, I came across two interpretations of these events:

These interpretations are interesting because, regardless of the origin of the serpents, each depiction inherently paints G-d with very humanizing qualities. Pettiness, revenge, and indifference are all “mortal” characteristics, and I’m always challenged (in a contemplative way) when G-d is described in this manner.

Regardless of how you choose interpret the bringing of the seraphim plague, the solution to the problem is quite interesting. The Israelites atone for their sins and G-d instructs Moses to mount a metal snake on a staff/pole. (S)he then imbues it with divine power so that the stricken who look up at it may recover. Quick aside- interestingly, this comes AFTER the Israelites were infamously punished for looking up to a false idol. The irony is not lost on me.

Back to my point. The Israelites were saved by coming to terms with their own weakness and facing down the very demon that had been plaguing them. After the snake ordeal is over, the gang travels for a while, receives water from G-d, and celebrates by trouncing a few armies who get in the way of their trek. All of this occurs after the death of two of the three major leaders of the movement and despite the fact that Moses already knows he won’t be allowed into the promised land when they finally arrive. If that’s not a sign of true strength in a leader, I don’t know what is.

The thematic “victory despite loss” motif that is prevalent throughout Chukat and, more broadly, the rest of Judaism’s history, has proven to be a timely lesson. It’s yet another instance where Jews turn on their heels, re-work their modus operandi, face their oppression, and become stronger for it. The problem – a plague of snakes – becomes the solution when reframed (and mounted on a magical staff). Maybe it’s all about changing perspective.

As I recover from the tumultuous start to my summer and begin planning another year of events and programming, I undoubtedly carry this lesson with me in my personal and professional lives. There might be a deluge outside, but strong, unwavering trees need water to flourish.

I say let it rain.

Ryan Kaplan grew up in the Atlanta Jewish community and attended Georgia State University, where he graduated with a B.A. in Marketing. Read his full bio here.

Interested in becoming a JOFEE Fellow? Applications for Cohort 3 (2018-19) are open!