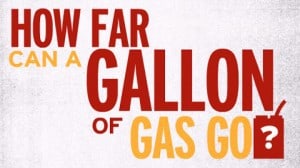 Citgo wants to know “How far can a gallon of gas go?” We’re hoping to take it across the United States in support of our cyclists.

Every Hazon ride provides extensive support to its cyclists. This means transporting people and gear in cars and trucks. The cost of fuel is rising and that raises the costs of running a Hazon ride. With your help we can provide grant recipients with the funds they deserve.

Citgo is giving away thousands of gallons of gas to charitable organizations around the country.  If you love the work that Hazon does then you can help us win this contest and cover one of our most significant expenses. The fuel donated will help transport staff and mechanics across the country during our 2012 Cross USA Bike Ride.

Through ten New York Rides, two California Rides, and one DC Ride, we have raised over $2.2 million to support the Jewish environmental movement.  Hazon has used $1.1 million of these proceeds to support our national Jewish CSA program, the annual Food Conference, The Jew and The Carrot, our Food for Thought Curriculum and JFEN (Jewish Food Educators Network), and many other programs over the years. Additionally, nearly $600,000 has been distributed as grants to nearly 70 different organizations.

Voting closes on August 11th. Please vote for us daily and pass this on to your networks.  You can vote once per email address.
Learn more about the Fueling Good contest.

If you’re a Facebook user, simply copy and paste (or feel free to write something on your own) one of the following messages. You can also use any of the social network buttons below to post on your favorite social network.