By Jakir Manela on December 14, 2022 in Activism, Climate Change, In the News, Jakir, Newsletters

“I have often said that a vote is a kind of prayer for the world we desire for ourselves and for our children. It is faith put in action. It is the sober recognition that we pray not only with our lips but with our legs.” – Senator Rev. Raphael Warnock, Dec 6, 2022

Over the past few months, I have been traveling and speaking to hundreds of Jewish leaders and institutions across the spectrum of Jewish life. Federations and summer camps, day schools and congregations, social service agencies, social justice organizations, Israeli & Arab & Muslim & multifaith partners, leaders of all Jewish denominations and yes, a variety political persuasions as well. In each conversation, leaders and institutions lean in to partner with us, in many cases representing their first steps in prioritizing climate and sustainability. Slowly but surely, we are building a broad and deep coalition–including and transcending our “base.” By engaging the mainstream Jewish world, we are inspiring and empowering a new network of allies and partners, multiplying our impact. Hazon leadership has lead or will lead discussions on sustainability and climate at the following conferences, November through January:

Meanwhile, the midterms (and the Georgia finale last week) presented stark choices, and voters responded, supporting leaders committed to democracy, reproductive rights, and the rule of law. Massive turnout seems to indicate that the American people recognize the threat and no longer take our participatory democracy for granted–because it’s more than just our opportunity and/or responsibility as citizens. As Senator Warnock said last Tuesday night, “I believe that democracy is the political enactment of a spiritual idea. The notion that each of us has within us a spark of the divine.” In Jewish tradition, this is the idea of B’tzelem Elohim, that every human being is made in the image of G!d. So every time we vote, every step we take towards social justice and climate justice, every time we speak out against antiSemitism, racism, and bigotry of all kinds, and every time we reach out to learn from and partner with someone who thinks and acts differently than we do–we enact this foundational Jewish teaching. For as Maryland’s first Black Governor, Wes Moore, teaches us in his book The Other Wes Moore, “The chilling truth is that his story could have been mine. The tragedy is that my story could have been his.” Only a fine line separates our experiences and perspectives from each other- and our ability to see and cross that bridge reflects the true measure of our empathy and humanity.

Of course, easier said than done. Do we actually affirm the humanity of election-deniers and climate-deniers? Do we try to listen to people with different priorities, who want different outcomes, based on different values? How do we transcend the vast cultural chasms to connect with and understand those with whom we most passionately disagree? It feels easier, cleaner, morally superior to refuse and avoid engaging with the other. But progress for all often emerges from practical compromises amongst opposing factions finding common ground.

That’s part of how climate progress is happening through the Inflation Reduction Act. First, many thousands of passionate, committed activists organized and mobilized millions of voters in order to elect candidates prepared to confront the climate crisis with the gravity and urgency it demands. And then there were months of listening and negotiating and compromise that eventually got it done. First we mobilize to maximize our power, and second we negotiate and compromise within our ecosystem. It’s the virtuous cycle of democracy and consensus-building. If only we can recapture its craft and not get pulled down by the hateful algorithms of social media, or become convinced that somehow we can win through insults and ridicule. It is time to reweave our social fabric, to rebuild our culture away from polarization and towards shared understanding. 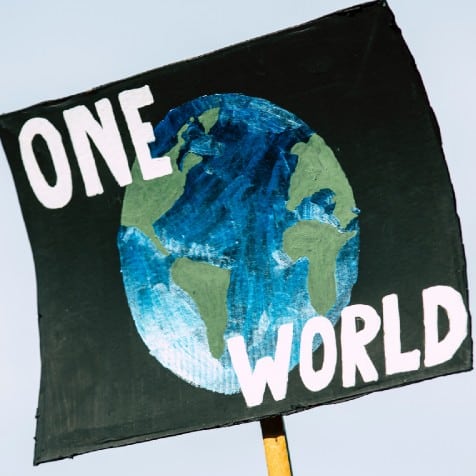 There are many ways to orient to climate and sustainability as some of the most profound challenges and opportunities of our time, and to the role of the Jewish people in this moment in history. Our voice, our role, and our path–at Hazon, at Pearlstone, and across our movement–has been to defy the forces of polarization by building a movement that brings people together, built upon love rather than attack, upon hope rather than despair, upon deep inspiration and constructive action. Our path is to catalyze culture change and systemic change, and that path takes us into and through the center of our communities. Our role is to build a big tent, to stay true to our values while still open-minded and open-hearted. That path will spark change in Jewish communities everywhere, many of whom are only now starting this journey. So let us begin from where we stand- along with partners across many faith communities, cultures, and traditions. We will solve this crisis together, or not at all.

The people have spoken.

B’tzelem Elohim.  ALL of us are holy.

Our mission at Hazon-Pearlstone is to lead a transformative movement deeply weaving sustainability into the fabric of Jewish life, in order to create a healthier, more sustainable, and more equitable world for all. We connect people to the earth and to each other, catalyzing culture change and systemic change through Immersive Retreats, Jewish Environmental Education, and Climate Action.

COP27, Mount Sinai, and Flora of Vanuatu
Questions For Our Future