So what is “the New Year for Animals”? 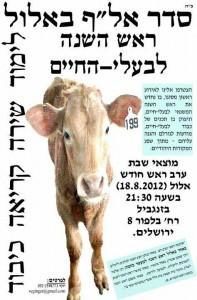 According to the Mishnah (Rosh Hashanah, Chapter 1, Mishna 1) the first of the month of Elul is “the new year for tithing of beasts,” the same source that tells us that Tu B’Shvat is the New Year for trees. Originally, Tu B’Shvat served as a marker of time for taxation and tithes for trees and it has transformed into a spiritual/activist holiday relating to the celebration of the environment and the natural world surrounding us. The hope is that the first of Elul can also become a holiday celebrating our relationship with animals. Whereas tithing animals is not relevant nowadays – cruelty to animals in agriculture is harsher than ever. Jewish teachings about our duties to animals are thus more relevant than ever, and a day dedicated to the issue is a pressing need. By renewing and reclaiming the first of Elul in this manner, we can take a day that was once connected to sacrifice of animals, and can transform it into a tool for their protection.

This notion of Rosh HaShanah for animals was first brought to Varady’s attention when he was in elementary school, and where he already began wondering why this holiday was not celebrated the way that “Rosh Hashana La’ilanot”, “Rosh Hashana for trees” was. As Aharon grew older and sensed a general lack of seriousness and comprehensive thinking when it came to considerations for animals in the Jewish community, he decided to try to revive the holiday, which is dated to Rosh Chodesh Elul, this year on August 18 and 19.

At the Open Space session on Saturday night of the Siach conference 2012, Varady presented this idea to a handful of other interested Siach members. As a result of this session, Varady partnered with JVNA (Jewish Vegetarians of North America) and the Shamayim v’Aretz Institute (the new animal welfare and veganism org of R” Shmuly Yanklowitz) and together they spread the word to rabbis, summer camps, and other interested populations,  using this opportunity to create greater awareness for “tzaar baaeli chayim”, different ways in which domesticated animals are being harmed.

To date, a dozen groups have endorsed the initiative and three events have been organized: two in Jerusalem and one in New York. The event received media coverage, both in Hebrew and in English, and plans for next year are already underway.

For a taste of how this holiday was observed in Jerusalem, Yossi Wolfson describes: “we had two different events to observe the New Year for Animals. The first followed the shape of a Tu B’Shvat Seder. We had a special Haggada, a compilation of texts relating to respecting animals and protecting them. The texts were from the Jewish heritage – starting with the Bible, continuing with commentators of different generations and ending with 20th century rabbis. Between the texts we had 4 cups of wine (or grape juice) symbolizing different types of animals: fish; reptiles/amphibians; birds and mammals. The Seder plate included plant equivalents of meats, cheese and mayonnaise –  a silent reminder of the ways we exploit animals, and at the same time a reminder of the possibility of liberating ourselves from these oppressive relations. It was an exciting night. Not only was it a first-ever ceremony of the New Year for Animals, it brought together such a varied group of people: Ultra orthodox (Charedi) from the group BeHemla; Zionist-religious people and non-observant Jews. We had two new immigrants from the US and from Uruguay, Hebrew and English speakers of all ages. Discussions and singing continued far after midnight…

You can see pictures from the seder and the garden event on facebook.

For more details, contact Yossi Wolfson at veginger@gmail.com and Aharon Varady at aharon.varady@gmail.com

Shabbat at Burning Man
When 6,500 people come together