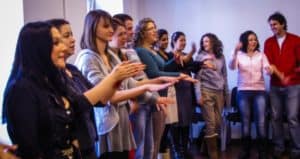 A group of activists from North America, Israel and Europe who met at the first Siach conference at Isabella Freedman Retreat Centre, have been collaborating on a couple of projects since we left the lentils, goats and lake behind in May.

The first of these projects engaged young Jewish leaders from Central and Eastern Europe with social justice in Israel when MiNYanim Central-Eastern Young Jewish Leadership program (run by Tamas Buchler from Hungary) visited Kibbutz Eshbal and had a workshop with Zohar Avigdori from the  ’Hechalutz’ educational center of the ‘Dror Israel’ movement. This brought together Jewish students from Hungary, Poland, Serbia, Germany and Israel to see examples of projects acting for a more just society.  This partnership emerged out of the personal connection between the two who met at the conference, had breakfast in Chinatown the morning after the conference, and that connection grew even stronger as they met once again a month later over a plate of Hummus in Akko, when Tamas visited Israel.  They realized that the two of them have a very similar vision, beliefs and ideology when it comes to Zionism and activism in Israel and the Diaspora and their collaboration seemed a natural fit.

Some of the young Jewish leaders from this trip were so impressed that they are considering volunteering in Eshbal in the near future.   In addition, there are concrete plans already in the works to link additional youth groups in the various European communities with Zohar and the young people he works with in Dror and at Eshbal to make this a long-term partnership.

Tamas and Zohar are also in the planning stages with Idit Klein (Keshet) and Michael Hopkins (Nehirim) on an LGBT trip to Israel. Currently, they have a trip scheduled this November with some initial collaboration. A more developed partnership with a bigger trip may occur at a later time depending on funding.