By Hazon on September 1, 2017 in JOFEE Fellowship 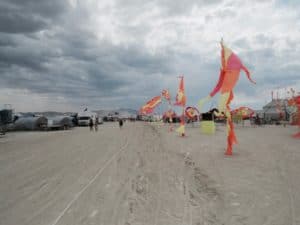 I arrived on playa for my first Burning Man at midnight on Sunday after eight hours of driving. I got out of my car and I was immediately aware that I had absolutely no bearings. Nothing about this landscape, these people, these structures, or flashing LED lights was familiar, and in a sense, I was no longer familiar to myself. After calibrating my body to the harsh environment and exploring for a few days, I decided to check out the Jewish Theme camp – Milk and Honey.

On Thursday morning, Milk and Honey held Torah study and we explored the feelings of unfamiliarity in this particular landscape. We discussed how in Hebrew the word for “Desert” and “Wilderness” is synonymous and wondered if this was because the desert was the only wilderness known at the time of writing the Torah, or if the Desert holds a wildness unique unto itself. We discussed the story of Moses and his discovery of the burning bush in the desert – both how it took his initiation of awareness and curiosity in the bush for G-d to then reach out to him, and how the wisdom he gained in the wilderness was critical for his fight for justice back in society.

Burning Man has an inherent theme of justice in the way that many of the installations mock the familiar to unveil their absurdity (i.e. “Spank of America”). While I can appreciate efforts to awaken people to the catastrophic impacts of an unjust and unsustainable culture, I was, however, most interested in how people creatively offered viable cultural alternatives. During my experience at Burning Man, there seemed to be two main options – (1) act out the norms of a culture you do not belong to (much of this can be seen as cultural appropriation) (2) do number one and add in a layer of ridiculousness (i.e. chefs worshipping the Doughy-Sattva aka a pillsbury doughboy sculpture). There was one ritual, however, that I was looking forward to – Shabbat at Milk and Honey.

In preparation for shabbat, I donned my white pants, white rabbit fur bandeau, and sun hat and biked over to Milk and Honey. We all settled in on the ground and on benches, and watched as 30 members of the camp climbed up the shipping container behind the “bimah” and sat, not unlike angels, from above watching down on us. Seeing all the creative ways people mixed white Shabbat dress with diverse gender expressions and Burning Man fashion felt like I was witnessing a cultural revival.

The service was led by a young woman with ten other facilitators and attended by roughly 1,000 people. We sang songs, clapped our hands, signed a song with our hands, danced and were led by a Muslim woman in the Call to Prayer prior to the Sh’ma. During the service, Art Cars passed by respectfully silent, except for the occasional blast of fire from a dragon’s metallic mouth or “Shabbat Shalom, hey!” I had the feeling that everyone there, and everyone that passed by, knew how special this moment was, how unique in a sea of overstimulation and delirium, to just hear other human voices singing.

It was especially meaningful for me to look around and notice that I belonged to an ancient and adaptive culture that was meeting the needs of modern-day humans (Jewish and not) without stealing, appropriating or disrespecting someone else’s culture. I felt so proud of my generation for figuring out a way to honor very old traditions in a way that resonated with our current values. After the service, we all sat down to a meal together. It felt good, it felt like home.

When people asked me why I decided to come to Burning Man this year, the answer I gave them was, “I’m curious what people actually need from social groups and what our society doesn’t give them, that Burning Man does.” It remained unclear to me the entire time whether Burning Man exists merely as a reaction to the isolation and individualism that we experience in everyday life, or if it meets a deeper need we have to journey and meet other people who are unlike us and exchange goods and ideas.

Leora’s love of food, farming and nature began in high school when she started a school garden, and soon after, a small market garden on her parent’s land in the Sierra Nevada Foothills in rural Northern California. Leora was has been both a nature camp counselor in her home town and a camper at Jewish summer camps in wilderness settings. Leora has a bachelor’s degree in Sustainable Agriculture & Food Systems and a minor in Women & Gender Studies from UC Davis. During college, Leora directed both a community garden and the Whole Earth Festival and lived in cooperative housing. Leora has worked in organic farmer education, goat farmsteading, garden-to-table food service, and as a medical assistant at her childhood Jewish camp. Leora recently received her Permaculture Design Certificate through an Earth Activist Training course and is excited to use her new knowledge and experience as a JOFEE Fellow. When her hands aren’t covered in dirt, Leora is a photographer, writer, ceramic artist, hiker, biker, avid reader, fabric artist, cook, traveller and has a secret love of interior design. Leora’s guiding passion is to reunite diasporic people with their traditional cultures and reconnect them with land and community. She is thrilled to be able to do this work through a JOFEE Fellowship at Camp Tawonga.

In the News: Styrofoam Bans, Paw Paw Trees, and a Home for the Chickens
Spotlight on a Siach Partnership: Rosh Hashanah LaBehema