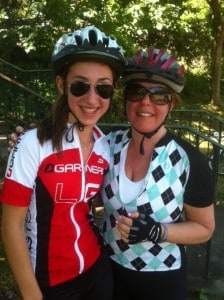 Makayla and Donna on a recent Hazon training ride

When Donna Kahan first read about Hazon’s New York Ride, she thought it sounded like something she would love to do, but didn’t see how it would work because leaving her kids and husband for Labor Day weekend just seemed too complicated. A resident of Demarest, NJ, Donna had been on the lookout for a new group to bike with since her cycling group had recently broken up. She decided to check out the Hazon training rides.  On her first training ride, she met Ezra Weinberg, one of the chairs of this year’s New York Ride.  When Donna mentioned to Ezra that she would love to do the ride with her daughter Makayla, she wasn’t sure that, Makayla was quite old enough. Ezra was very motivating, and was able to convince Donna that she and Makayla could definitely do the ride together.  The pair got some tips on training a friend who had ridden in the New York Ride before. Since then, mother and daughter have been riding together every weekend in Hazon’s training rides.  Makayla is going to be a freshman at Northern Valley Regional High School in the fall.

It turns out Donna had little reason to be worried, as Makayla is proving to be quite the biker!  When they got to the JCC this Sunday, and learned the route for the day’s training ride, Donna was worried that Makayla, who hasn’t trained much on hills, might have trouble making it to the end of the very hilly 45 mile ride.  Makayla found the hilly beginning to be a bit tiring, but flew right through the rest of the ride, and when the group arrived back in Manhattan, she wasn’t ready to stop.  Even though she had just finished her longest ride ever, she turned to her mom and suggested, “Let’s go into Central Park!  I want to make it to 50!”  Donna had to insist that they wait until next week.

The experience of getting ready for the ride has been very rewarding so far, and Donna and Makayla are eagerly looking forward to the weekend of the ride.  In Donna’s words, “It’s really great knowing that we do this together every weekend, and that we’ll be going on this Shabbaton together.  The mitzvah component of raising money for a really important cause has been very meaningful, and it’s great that at the same time we’re spending time together and doing something healthy.”

Register for the New York Ride, learn more about the community, and donate to riders like Donna and Makayla

UPDATE: The next 30 riders to register will receive a 30% discount! Just use the code “30riders”. This discount will expire once we hit 30 new riders. Act now!