I got an inexpensive Airbnb near the marina in Ashkelon, to decompress for a day after the Israel Ride and to catch up with some work and write this email. Right now I’m in the marina. Totally deserted. There were more than 200 missiles shot out of Gaza, yesterday and today, and everything in the south – schools, shops, businesses – is closed. I’m one of just two customers in the only café open here. It is quieter, far quieter, than Israel on Yom Kippur.

It is strange to sit in an apartment, as I was doing a couple of hours ago; hear a siren go off; and then walk a few feet into the room which is a miklat, a sealed shelter, as one is instructed to do.

Then a few seconds later you hear a boom go off, quite close by, presumably an Iron Dome intercepting the incoming missile. Before walking to the marina I was asking a friend in Kfar Saba what the custom was if you’re in the street when a siren goes off. She said, look, you have to duck and try to get cover, because you may not care if you get killed, but one civilian death at this point could start a real war, so you have an obligation to try and take care of yourself. And we both laughed.

But of course this is not a laughing matter, and it is sad and tragic to see these cycles continue. Twice during the Ride we had live conversations, as a group, with people in Gaza – once a video chat with a young social entrepreneur, a very impressive person indeed; and then the next day a phone call with one of the people who organized a Gaza bike ride in parallel with an Israeli ride created by Aharon Ariel Lavi, who runs Hazon’s Hakhel program, and lives a couple of miles from the border. People on both sides – even just a few – are trying to reach out.

I know there are people in Gaza who, right now, might be priming missiles to lob randomly in my direction. But there are others there – perhaps just a handful, more likely in at least the tens of thousands – who simply want to be able to live in peace and get on with their lives. It is the lesson of this week’s Torah portion that the foundational act of Avraham, as the first Jew, was to argue against destroying the immoral towns of Sedom and Gemorrah, even if they only had 50 good people, even if they only had ten. Israel is not trying to destroy Gaza, but given the history, it is too easy to demonize anyone from Gaza as a supporter of Hamas. It is important and inspiring to see even a few people on both sides trying to build real relationships.

But this is prelude. I want to write about a very significant error of omission that, if uncorrected, will damage the American Jewish community for generations to come. I was finally prompted to write about it by the demographic profile of our Israel Ride just now. The median age was about 62. In 2003, when we began the Ride, the median age was maybe 47 or 48.

I think that this reflects the fact that remembering the Yom Kippur War is a huge unseen dividing line in American Jewish life. If you were 13 in 1973, then you were 43 in 2003, and you’re 59 now. There are people over those ages who are unconnected to Israel, or strongly hostile; and people who are younger who feel very connected to Israel, or very supportive. But as a general proposition, I think that 60-year olds have more in common with 80-somethings, on Israel, than they do with folks who are 52; and 48 year olds have more in common with 20-somethings than they do with people in their late fifties.

Up to the Yom Kippur War, diaspora Jews had an emotional understanding of Israel’s fragility. After it – not so much. (And there is no contradiction, by the way, between acknowledging Israel’s great strengths – it is a regional superpower, in all sorts of ways – and immensely fragile.)

I would argue that there are now, broadly speaking, four groups in American Jewish life, in relation to Israel.

One group is traditionally “pro-Israel.” Connected to Israel in many ways. Nowadays this group skews right-wing and skews orthodox. I have a good number of friends and relatives in this group, and I mostly admire their commitment, and/but wish that some of them had a more nuanced and/or less triumphalist understanding of Israel. (I commend Encounter trips for people in this group, as a way to understand Palestinian perspectives more deeply.)

One group is generally disinterested in Israel, and I think is fairly well-served by Birthright Israel, at least as an opening frame and builder of relationship, and that is then backed up by Masa, and many other good programs. (And from this base, in due course, people spread out in a wide range of political and religious perspectives – as one would expect.)

One group – a growing one – is Jewish people who strongly support BDS and are (more or less viciously) hostile to Israel. I feel sad about the views of this group – I disagree with them strongly – but in general, and with a few exceptions, it has been my experience that they are not open to other views on the topic.

This then leaves a fourth group, which comprises Jewish people under the age of, say, 45 or 50, who often have some reasonable Jewish background – dayschool or summer camp or some kind of Israel trip – and who are liberal or progressive. If you exclude people who are most bigotedly pro-BDS, this group nevertheless is increasingly parev on Israel, to put it mildly. It includes many people who staff liberal and progressive Jewish organizations. It will comprise many of the people entering rabbinical seminaries in the next 20 years. It includes many people who are involved with If Not Now.

The immense error of omission has been in failing to build systematic programs to build connections between this group and change-makers in Israel. With limited resources, Hazon has tried valiantly over the years. We have a clear pedagogy, which spanned our Siach program (to connect American, European, and Israeli environmental and social justice leaders) and our Sustainable Israel tours, and certainly our Israel Ride itself. It is about leaning in to complexity. Meeting people of a wide range of views, and a wide range of topics. Learning about huge challenges facing Israel, and not in any way trying to gloss them over, but learning about them through the prism of people who are actually trying to make a difference for good. And meeting with – eg – environmental leaders; Bedouins, Druze, Ethiopians, Israeli Palestinians, Palestinian Muslims, Palestinian Christians, people in the periphery, different religious streams, and so on. And trying to create contexts for learning and for ongoing relationships.

And – to be clear – I know that some of the Federations, JStreet, NIF, Hartman, JFN, Israel Policy Forum and others are doing some of this. But in general these trips, directly or indirectly, are focused on fundraising – and thus they skew older and wealthier. What we need is something closer in scale to Birthright or Masa than to Federation or NIF leadership trips. We need serious funding to create these programs, and planning for before and after.

If we build these bridges, Israel will still have many problems, and the Jewish community will still have many fractures. And we’ll still have a wide range of opinions. But at least we’ll be applying some centripetal force. At least there’ll be countervailing relationships. At least a critical group of emerging American Jewish leaders will have some real understanding of the complexities of the situation, some empathy for why Israel hasn’t suddenly solved “The Occupation,” and real ongoing relationships with Israelis who are trying to make a difference.

If we don’t, then the social milieu of young Jewish progressives will continue to be heavily influenced by the intensity and intellectual purity of the young BDS-ers. And cracks that are starting to open will become far far worse.

And what struck me is that they disagree with each other very well.

Far too many of the young progressives I meet in the US sometimes seem to relate to me as if there is a single correct view, on any given topic, and anyone who doesn’t hold to that view is somehow a bad person – or at least suspect. The Arava Institute alumni, by contrast, really do not agree on quite a number of key topics. But they like each other – in many cases they really love each other. Their views are so far apart – in some instances – that there’s no chance of them really converging. And so their bedrock is a bedrock not of agreement on issues, but rather simply on discourse itself, and on the humanity of people with whom you disagree; of the possibility that other people can legitimately hold strong and dissenting views from your own.

It strikes me that it would be a fitting postscript to the work that American Jews have done in supporting the Arava Institute (including the millions of dollars now raised directly or indirectly from our Rides) if we could now start to learn from them how to build stronger relationships and discourse, both within the American Jewish community, and between American Jews and Israelis. 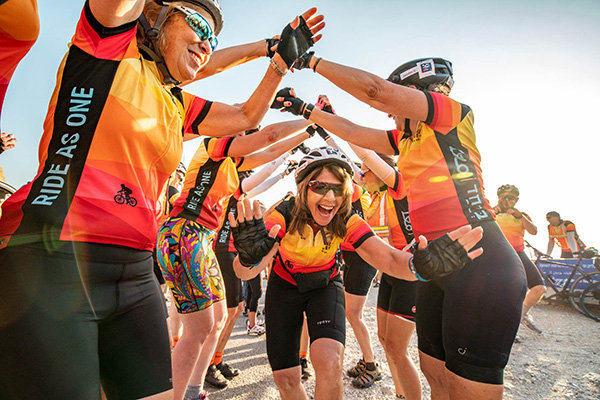 PS – And if you’d like to join us for next year’s Arava Institute Hazon Israel Ride, registration is now open. Our early registration price of $500 has been extended through Sunday night. Register now at the lowest rate we will have all year before prices rise to $750 on Monday, November 18. More than 60 people have now registered. It is a profound and powerful experience. If you’re under 40 we now have scholarships to facilitate you joining the Ride!

PPS – One of the things that binds the work of Hazon and the Arava Institute is a commitment to responding to the climate crisis. If you haven’t read this extraordinary and important essay, please do so. If you have not yet given a gift to Hazon this year – or would like to give us a further or increased gift – please click here to do so. Our work has never been more important or necessary, and we hope that you will want to be a significant stakeholder in it.

What’s On Your Plate? Resources to support better food choices
What Sukkahfest Means to Me