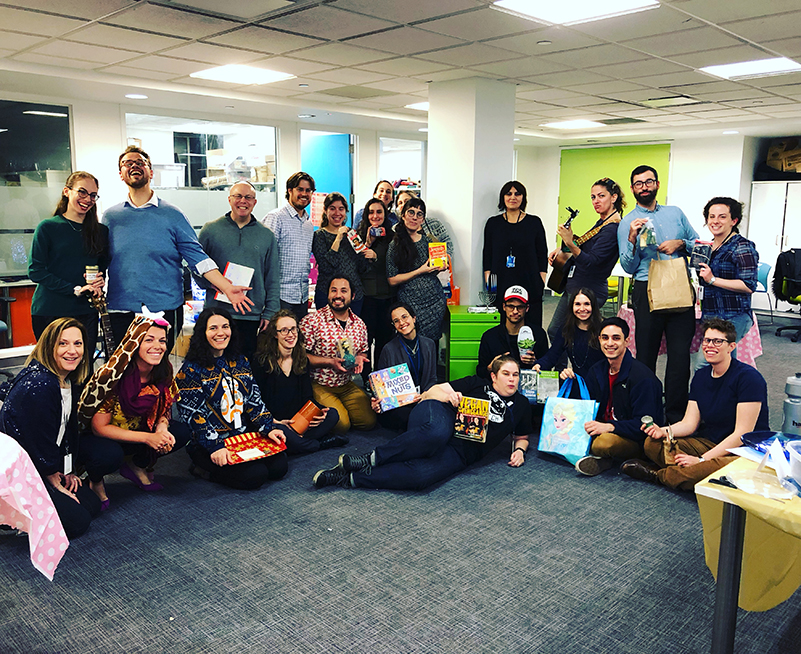 Hazon is moving offices today. This marks at least the temporary end of Makom Hadash, our shared office space, in its current form. As of Monday morning you can find us at 25 Broadway – working within the offices of our new landlords, JFNA, and alongside JCPA and possibly in due course one or two other organizations. We are looking forward to connecting with our new colleagues.

But there’s no question that this is bittersweet. We’re leaving the offices of the Forward, and our now old “new space” that we have so happily shared with Lab/Shul, with Avodah, and, over the years, with a range of smaller groups, including Art Kibbutz, Eshel, Limmud NY, as well as NY-based staffers of groups such as Keshet, Moishe House, Moving Traditions, and Svara.

So today is an appropriate moment to reflect on four different overlapping initiatives that Hazon has helped to create or that we sponsor, even as we ourselves transition both physically and strategically. In doing this I want to make some quite specific suggestions to people involved in leading Jewish institutions.

It was roughly nine years ago that we first launched Makom Hadash (backed by the Lippman Kanfer Family Foundation, UJA-Federation of NY, and Wendy & Jeffrey Schwarz, amongst others).

Then six years ago we and Pearlstone Center produced the first Jewish Intentional Communities Conference. And with Dyonna Ginsburg, then at Bema’aglei Tzedek, we organized five Siach gatherings, bringing together Israeli, European, and American environmental and social justice leaders.

These in turn led us to found Hakhel (our Jewish intentional communities incubator, led by Rabbi Aharon Ariel Lavi, and backed by UJA-Federation of NY and the Israel Ministry of Diaspora Affairs.)

And a tad later we were founding partners in Kenissa (created and led by Rabbi Sid Schwarz and backed by the William Davidson Foundation.)

Each of these is a slightly different project, with different stakeholders and somewhat different goals.

But there are at least three shared instincts that informs each of them:

The first is that “community” – that amorphous, overused word – is real and important, even as the nature of community (what it means, what it looks like, how it is constructed and maintained) has evolved.

The second is that colocation – actually being in the room together – remains vitally important, even as some parts of our lives become “virtual.”

And the third is that sharing resources is both a part of Jewish tradition, and a vitally needed component of living together more lightly and more effectively (including financially more efficiently) in the future.

Contiguity and the conscious construction of space are important. A space and an enterprise can be welcoming or alienating. At Makom Hadash we had snacktimes on Thursday afternoons. It was not a big deal – yet it was a place where people had the chance to say hi. Our work space was subtly different because of it. At Makom Hadash the Executive Directors of different projects met together a few times a year. We held them under a cone of silence, we shared our successes and challenges, and as we did so we offered and received advice and built persistent professional friendships. As one of our residents put it, “The communal nature of Makom Hadash fostered a culture of deep caring about each other’s success. Even though our organizations were distinct and our missions were different, I always knew that I had colleagues to turn to for whatever I needed.”

Meanwhile, the Jewish Intentional Communities Conference and the Kenissa gatherings are bringing together networks of communities, networks of people who are thinking about these issues.

Two clear lessons stand out from this.

First: at this time of great change and fragmentation, and despite our challenges, fiscal and otherwise, we have to find ways to unlock value from surplus physical assets.

And secondly we need to invest more – and more consistently – in mechanisms for strengthening the relationships that underpin community, both personal and professional. That includes retreat centers themselves, and the mechanisms that we put into new and evolving forms of what I think of as “persistent temporary communities” – annual gatherings that bring leaders together across commonality and build and strengthen the new skeins of relationship that are weaving new communities and networks around the country. This is why as an organization we have been so committed to projects such as Siach, Hakhel, the JOFEE Network Gathering, and the Hazon Food Conference. (The new Jewish Farmer Network conference, for professional Jewish farmers, is I think going to be an amazing and important addition to the landscape.)

Here are some things that are beyond Hazon’s pay-grade – but which someone reading this might put on your to do list:

So – if you’re involved in leading a federation or foundation, feel free to put these topics on your agenda, or move them higher up it if they’re already there.

If you have substantial physical assets – including large suburban shuls – think about opening them up in new ways.

If you’re professionally involved in real estate or the origination of different financial instruments, and you’re also a communal leader in Jewish life, now might be a great time to think about combining both hats in new ways.

And if you’re involved in convening cross-sectoral gatherings – the GA, JFN Conference, the Prizmah conference, the URJ Biennial – these are topics that are worthy of ongoing convening and conversation.

I end simply with this obvious but no less salient point. We had a temporary mishkan(Tabernacle). We had a temple in Jerusalem – and then a second one. And even before the Temple was destroyed we developed places of worship in locations other than the Temple itself. We created schoolhouses. We created and then reinvented yeshivot. And in due course, centuries later, we founded JCCs and dayschools, kibbutzim and moshavim, and then Moishe House and Makom Hadash and Isabella Freedman – new live-spaces, work-spaces, and temporary shared communal spaces.

Today changes of all sorts in Western societies are accelerating. And as people die from an unprecedented heatwave in Europe, the climate crisis is moving up humankind’s agenda. For the Jewish community, for many different reasons, we have to find new mechanisms to live together, to work together, to strengthen human resources and resiliency, and to use fewer resources. These transitions will require ingenuity and persistence and financial and relational capital. But I believe that we can do it – and that we must do it.

PS – As of Monday you can reach us at Hazon, 25 Broadway, Suite 1700, New York, NY 10004. (And I write from Detroit, where we happily and very productively work from the offices of Detroit Federation – we just welcomed Detroit Federation itself as our 20th organization in Detroit to join the Hazon Seal of Sustainability. This is contiguity working strongly for the benefit of many people and many organizations.)