By Becky O'Brien, Director, Hazon Boulder on August 7, 2012 in Colorado, Food, From Our Friends 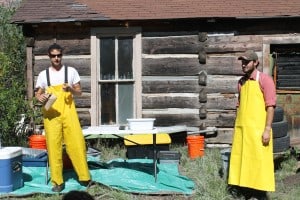 Recently, Ramah Outdoor Adventure, a Jewish summer camp in the mountains of Colorado, experienced a first.  In their effort to “lift the veil” on the food they produce at camp, they decided that this summer they would conduct a chicken Shechita (ritual slaughter) for any of the older chalutzim (campers/pioneers) and tzevet who were interested in seeing such a thing prior to their chicken Bar-B-Que.

Cantor Marcia Tilchin, Rosh Teffilah for second session, was present to witness the shechita. She writes,

It was surprisingly meaningful to see the complete shechting process and learn from Yadidya about what he finds so sacred in his work.  It was humbling to witness the actual slaughter in the company of some of our teens who chose to learn about this ritual act first hand.  I really wish I had been given an opportunity like this earlier in my life.  It would have made me more cognizant about about the foods that I ate unconsciously during my formative years, the challenges faced by the food industry in general, and the importance of taking no gift from God for granted.

Read more about this incredible experience on the Ramah Outdoor Adventure blog.