Hazon will be spotlighting a few of this year’s mini-grant recipients from the 2012 Hazon New York Ride. The New York Ride is Hazon’s longest-running program, and will take place for the eleventh time this Labor Day weekend.  Each year, the Ride is an opportunity for Hazon to connect with and support new organizations that are doing work we are excited about, and over the years we’ve been able to support upwards of 105 different organizations.  Just as importantly, the Ride has allowed us to build continued, long-lasting relationships with several organizations that we have been involved with from the very beginning, and whose goals and visions are similar to our own.  This week I had the pleasure of speaking with Einat Kramer, Founder and Executive Director of Teva Ivri, to discuss how this organization got started, its incredible progress, and where it’s headed! 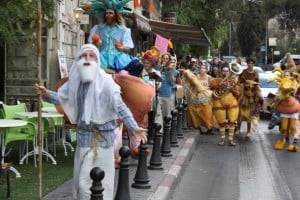 After a landmark conference in 2009 at the Jerusalem SPNI(Society for the Protection of Nature in Israel) that brought many Jewish activists and environmentalists together, there was a mutual realization for the need of a new NGO. One with the primary purpose to turn the environmental and social values rooted in the Jewish tradition into the foundational building blocks of Israeli culture and society. With much help from dedicated individuals and supportive organizations, Teva Ivri was founded. Since the beginning, they have worked to reach Israelis who have historically not identified with the environmental movement, as well as organization involved in pluralism and environmentalism.

While there are many environmental groups in Israel, Teva Ivri is unique in that it both draws upon the ancient roots of sustainability and represents a diverse cross-section of modern Israeli Jewish society. Members of Teva Ivri come from a variety of backgrounds, religious practices, and beliefs, but all share a common conviction that only through a pluralistic Jewish consciousness of responsibility for the land and its people will Israeli society reach a state of cultural and environmental sustainability.

This summer Teva Ivri has continued their ‘Sustainable Synagogue Contest’, which was launched during Passover. The contest aims to raise Israelis’ awareness about the links between Judaism and the environment and to encourage concrete change in Jewish institutions. Teva Ivri has provided information and guidance to synagogues on how to be more sustainable, and participating synagogues will be evaluated based on their actualization of environmental and social justice values.

One highlight of their programs is Shabbat Noach (this year in October). Every year Teva Ivri joins the international Jewish world in the observance of Shabbat Noach as a “Sustainability Shabbat”- a time to raise awareness about environmental challenges and to inspire effective change in Jewish communities. Through study groups, lectures, articles in the media, and grassroots action projects in the community, Teva Ivri helps hundreds of Jewish communities observe this holiday with a unique, environmental perspective.

Einat appreciates all of Hazon’s work and shares how our focus on the Food Movement helped Teva Ivri conceptualize the Israeli “Food for Thought” programs, for which they received the mini grant. The whole idea of engaging people in environmental action through Jewish ideas was developed there, and even Shabbat Noach, which is one of Teva Ivri’s flagship programs, was born from a US-based initiative in which Hazon was actively involved.

Truthfully, Einat says, “we see Hazon as a sort of  ‘older sibling’ with many years of experience in the international Jewish environmental movement, and look forward to learning from Hazon and offering our own expertise where we can.”

Please visit their website to learn more about how you can get involved and stay updated with the wonderful work they are doing.

Lifting the veil with a chicken shechita–at summer camp!
A Guide to Jewish Practice: Everyday Living