P.S. Interested in being or hosting a JOFEE Fellow? Applications for cohort two are now open for both prospective fellows and prospective host institutions! 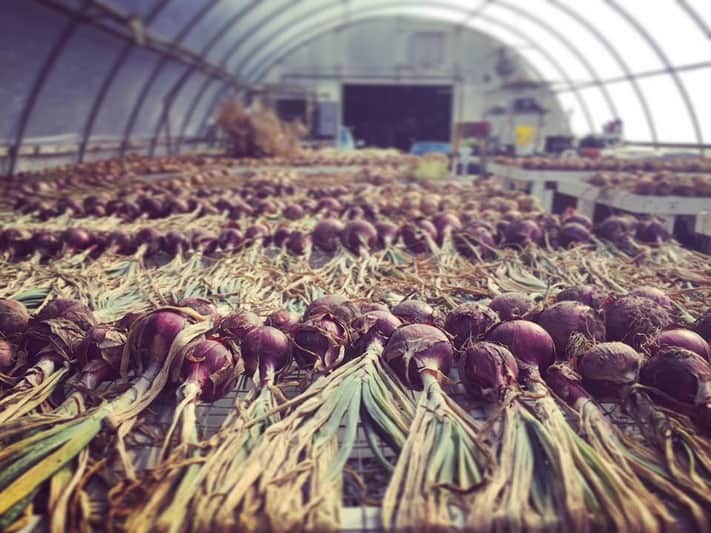 On a hot summer day in late August, I led a group of young adults on a tour of the Adamah farm on BeeBee Hill at Isabella Freedman Jewish Retreat Center. The inscription above the gateway, “And God saw that it was good,” reminds us of a classic JOFEE interpretation of the Genesis creation story: that the interdependent relationships found in nature are fundamentally good; and that by emulating these relationships, humans can learn to create more sustainable relationships with one another and the land. We then approached the orchard – designed using permaculture principles that imitate the natural layered systems of the forest – where we counted only about three small apples and three peaches growing on some twenty trees. “Has the fruit already been harvested?” one young woman asked. Unfortunately no. This was it, the fruit from the entire season. Our meager yield stemmed from larger climate issues affecting all of New England this year, mainly drought. Just like our ancient Israelite ancestors, we are dependent on rain coming at the right time and in proper amounts. The Shema, the core Jewish prayer, serves as a daily reminder of our reliance on rain and how its behavior signals the quality of our relationship with God. Shema – “Hear” – we are instructed. Hear the single unifying force behind all that exists.

This week’s Torah portion, Parashat Ha’azinu, means “Listen.” Ha’azinu features Moshe’s final address to the people. Written in poetic prose, Moshe begins by invoking the heavens and earth to bear witness: “Give ear, O heavens, let me speak; Let the Earth hear the words I utter! May my speech come down as the rain; my words distill as the dew.” According to Rashi (French Bible and Talmud Commentator), Moshe calls upon heaven and earth to bear witness to his words because he recognizes that his death is imminent, and he wants his words to be remembered by the most ancient and eternal staples of the universe. The heavens and earth were formed first in the creation story and therefore hold the most historic wisdom dating back to the beginning of time. When Moshe addresses the heaven and earth, he uses different language: He invites the heavens to listen, while he asks the earth to hear. This symbolizes the direct connection our actions have on the way that the heaven and earth relate. When we deviate from our inherent Oneness with God, these ancient witnesses, heaven and earth, are the first to react by withholding their blessing. When we make space for God in our lives, the heaven listens and offers down its rain and the earth hears by producing its bounty. This relationship is so paramount to our survival that we are explicitly reminded of it daily in the Shema prayer.

At this time, we also approach the Holiday of Sukkot (Feast of Booths and Festival of Ingathering), and I am again reminded of the continued relevance our ancient traditions have today. Sukkot, which is also known as “z’man simchateinu,” or “season of our joy,” is an agricultural festival celebrating the autumn harvest, and is also one of the three biblically based pilgrimage holidays known as the Shalosh Regalim. In ancient times, following the harvest, the Israelites would travel to the temple in Jerusalem to celebrate their abundance and give thanks to God for seven straight days. Today, we celebrate by dwelling in impermanent huts called Sukkot, just like our ancestors did for forty years of wandering through the desert before entering the land of Israel. According to Rashbam (French Bible and Talmud commentator), we dwell in the Sukkah to remind us of our vulnerable and ephemeral existence; to return to the ideal spiritual state of humility and dependency on God. The Sukkot Festival culminates in the holiday of Shemini Atzeret, which literally means “the assembly of the eighth [day]”. At this time, we add the words “Mashiv HaRuah U’Morid Ha’Gashem,” “the One who makes the wind blow, and makes the rain descend,” to the Amidah, the central prayer in our worship services, which remain there for the next six months until Passover in the Spring. 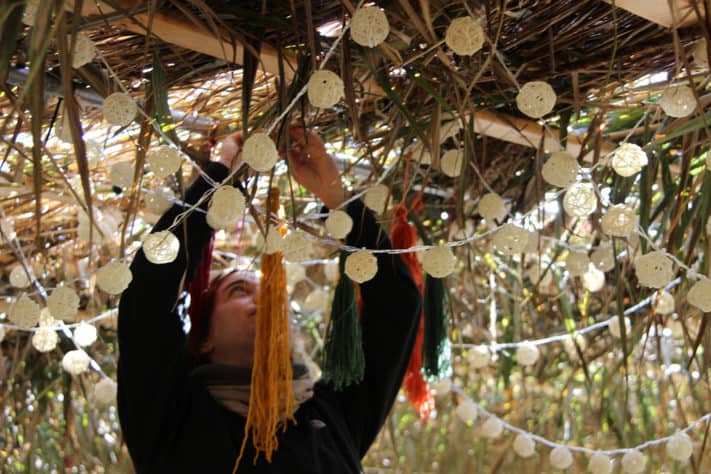 Decorating the Sukkah for Sukkahfest at Isabella Freedman | photo: Hazon

It is not a coincidence that Parshat Ha’azinu and Sukkot, calling us to listen and to gather in, occur during this time of year. All around us, we can see signs of the earth listening to the internal rhythm of the changing season and gathering in to prepare for winter. Here at Isabella Freedman, Adamah farmers are harvesting all of the seasons produce before the first frost hits, the squirrels are busy collecting nuts, and the leaves are changing color and some have even begun to fall (many leaves fell prematurely weeks ago due to lack of rainfall).

For me, the Torah comes to life when I connect Judaism’s earth-based traditions to the natural world and the seasons just like our ancestors did. In my role as the JOFEE Manager, I am responsible for ensuring that all retreat guests have an opportunity to participate in a JOFEE programming during their stay. It is my hope that JOFEE infusions at Isabella Freedman, offer guests a chance to experience firsthand the source of their sustenance. With opportunities to visit our farm, preserve our harvest through pickling workshops, and meditation walks in the forest, for many guests, JOFEE programming offers a new perspective on cultivating Jewish identities, spiritual practice and cultural connection. 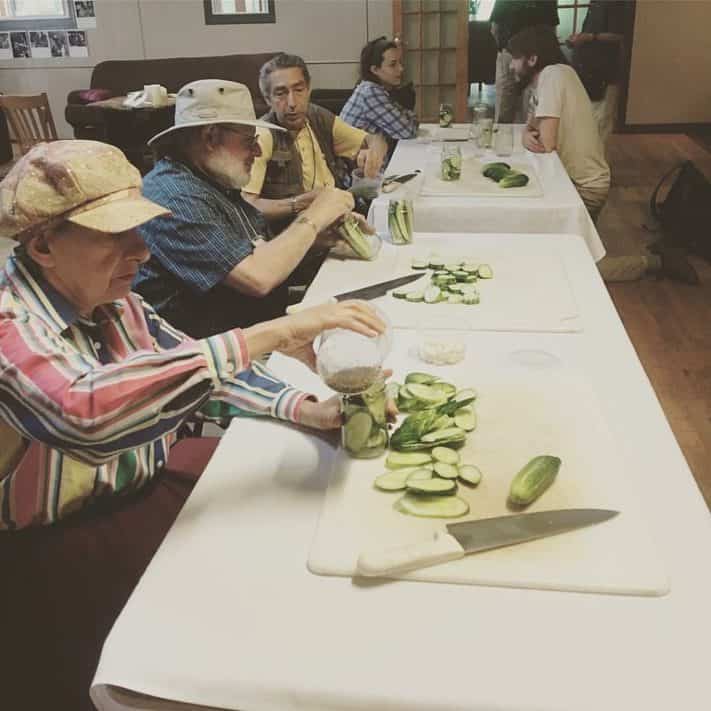 On a global scale, though, how does our ancient tradition help us make sense of the heartbreaking devastation in Haiti caused by Hurricane Matthew*? What are the heaven and earth telling us? The idea that our covenantal relationship with God is reflective in the natural events of weather is a difficult one for me to relate to. Making the connection between caring for the earth as a way of honoring the Divine feels much more meaningful to me. Focusing on the uncertainty of rain and the relationship between our actions and harmony of the natural world is the perfect conclusion to the High Holiday season.

Since I began working here in June, we have successfully delivered nearly 60 individual JOFEE programs to retreat guests at Isabella Freedman. Each one, like water, nourishes people. I am honored and inspired to continue offering JOFEE programming at Isabella Freedman deep into the rain season as the lead staff planning the culmination of all the JOFEE programming we do throughout the year: the 11th annual Hazon Food Conference – “Digging Deeper Into the Jewish Food Movement.” Held over the last 4 nights of Hannukah and New Year’s Eve (December 28th to January 1st), the Food Conference is one of Hazon’s signature annual events. It’s built the foundation for the Jewish food movement over the past decade. It brings together passionate people who are working for sustainable food systems on multiple levels – nationally and internationally, in their communities, and in their own lives. This year, we will learn alongside leading experts, growers, rabbis, writers and chefs, and envision how to positively impact the future of our sustainable food systems. We’ll be offering a brand new Kids Food Conference (KFC), happening simultaneously, where children and adults will reconnect with the Jewish tradition of food and learn and share ways that we can collectively heal the planet. It is no coincidence that there are no biblical holidays between Sukkot and Passover. Our ancestors used the rainy winter months as a time to slow down and draw inward before the growing season began again. In that same tradition, the Food Conference is a time to come together, to gather in, to listen, to learn, and to celebrate through the darkest time of the year as the Hanukkah candles shine brightly outward. 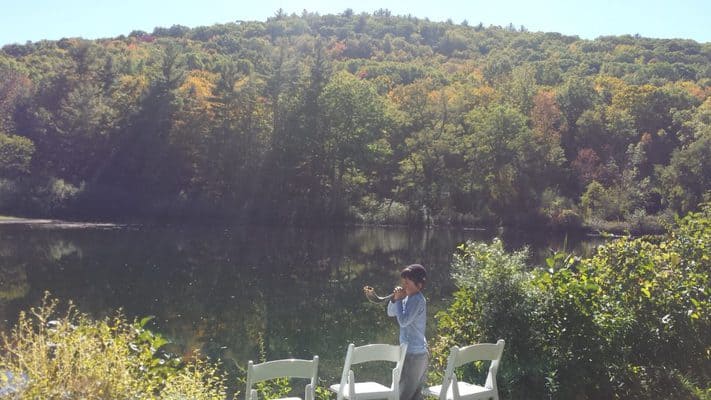 My blessing for all of us is to really listen in this season of joy and to honor our ancient witnesses, the heavens and earth. Amidst the floods and droughts let us heal our relationship with ourselves, with the land, and with God. Sukkot is the final harvest festival before the cold and hopefully rainy (or snowy) winter months. As Jews, we have a special responsibility to right ourselves to make way for a successful growing season. What can we do to play our part? Let us not only pray for rain with our words but with our actions. May the entire planet be blessed with a year of the right amount of rain in the right time. Chag sameach!

Jess Berlin is JOFEE Manager at Isabella Freedman and one of Hazon’s JOFEE Fellows. She is thrilled to be the lead staff planning the Hazon Food Conference, December 28th to January 1st. Jess grew up in a family of yogis, restaurateurs and food manufacturers, where cooking and gathering around large rowdy tables was an essential part of her life. Read her full bio here.

*American Jewish World Service is collecting donations for immediate relief and support for the long-term recovery for Haiti.