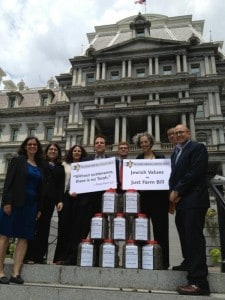 Jewish leaders before meeting with officials. Photo via RAC

Today, seven national Jewish groups delivered a petition with nearly 18,000 signatures to House Leadership and the Obama Administration demanding a focus on food justice in the next Farm Bill. The signatures represent a Jewish communal voice advocating for a better food system and have been collected since October by the Jewish Farm Bill Working Group, which consists of American Jewish World Service (AJWS), the Coalition on the Environment and Jewish Life (COEJL), Hazon, the Jewish Council for Public Affairs (JCPA), MAZON: A Jewish Response to Hunger (MAZON), the National Council of Jewish Women (NCJW) and the Union for Reform Judaism (URJ). The delivery of this petition is targeted to anticipate mark-up of the bill by the House Agriculture Committee in the next few weeks.

The working group itself represents a diverse cross section of Jewish advocacy, denominational and educational organizations coming together to call for anti-hunger and sustainable agriculture policies both in the U.S. and abroad. The group’s work is based on its Jewish Platform for a Just Farm Bill,a statement of principles endorsed by twenty Jewish organizations including representation from the four largest denominations (Reform, Conservative, Orthodox, and Reconstructionist). These principles include reform of international food aid policies, protection of funding for domestic food programs, particularly the Supplemental Nutrition Assistance Program (SNAP), and sustainable land and energy use.

Hazon is collecting signatures to let President Obama and the members of Congress know that we support healthy and sustainable food systems. Cyclists on the Hazon Cross-USA Ride will deliver the full list of signatories to the USDA at our closing ceremony in Washington. Whether the Farm Bill passes this week, in 10 weeks when riders arrive in DC, or next year, it’s important that you think about these issues and add your name.