By Hazon on June 6, 2019 in Climate Change, Detroit, Shavuot 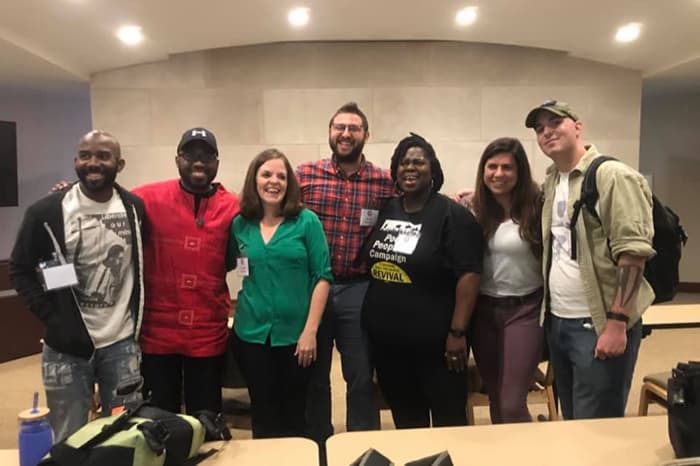 Pictured above: Rabbi Nate and other food justice leaders from across the country.

Last week, Hazon Detroit’s Rabbi Nate DeGroot presented at the Center for Earth Ethics’ annual clergy conference, focused this year on the intersection of food and climate change. Rabbi Nate taught on our unified connection to nature and the earth as Jews, and on Jewish practices related to gratitude and food justice. Other speakers at the conference included Former Vice President Al Gore, Center for Earth Ethics Director Karenna Gore, world-renowned soil scientist Dr. Rattan Lal, and many more. Mr. Gore’s presentation – similar in style and inspiration to An Inconvenient Truth and An Inconvenient Sequel – focused on three main questions in the face of our changing climate: 1) Must we change? 2) Can we change? and 3) Will we change?

We must. Mr. Gore said he likes to keep his presentations relevant, and so he included images and videos of historically abnormal flooding all around the world that has happened in just the last week alone. We know this is severely impacting the midwest region, including right here at home, where excessive rainfall has led to significant crop losses and delayed planting amongst close partners of Hazon and even in our own backyards. Mr. Gore shared that the five warmest years in recorded history have been the last five, and that 18 of the 19 warmest years have occurred since 2001. He shared that climate change has caused economic losses of $653 billion in just the last two years and that it could cause 1 billion climate migrants in the future. We must change.

We can. Mr. Gore presented data on the rapid growth of cell phones in the 1980s and 90s as an example of just how radically technology can change. In 1980, it was projected that there could be maybe 900,000 cell phone users by the year 2000. The actual figure was 109 million, or 120 times higher than estimated. Similarly today, the annual growth of the solar energy market exceeds estimates from 2010 by 17 times. In 2018, it exceeded 2010 estimates by 109 times. Solar jobs in the U.S. have grown 6 times faster than the overall economy in the last five years. “Solar installer” and “wind turbine service technician” are forecasted to be the first and second fastest growing job in the U.S. through 2026. Costs to produce renewables are going down. And the beauty of renewables is that, globally, wind could supply worldwide electricity consumption 40 times over, and enough solar energy reaches earth every hour to fill all the world’s energy needs for a full year. We can change.

This answer, Mr. Gore left up to us. As clergy and people of faith, he said it was up to us to engage and empower and inspire and motivate our communities to make the changes we need to have a healthy, habitable, hospitable, and balanced earth for generations to come. Will I change? Will we change?

This Saturday night at sundown, we kick off our summer harvest festival known as Shavuot, where in part we respond to that very same question: Will we change? Will we take all the gleanings from 49 days of counting the Omer, will we take the embodied liberation experienced at our Passover seders, and will we accept the sacred teachings of our tradition, so as to carve out a path of meaning, justice, love, and service for ourselves and for our community? Standing at the foot of Mount Sinai, just before receiving the Torah from God, the Israelite people proactively proclaim, “We will do what we understand.” It is on us as modern citizens of a global world, and as Jews awake to the time we’re living, to do what we understand. This Shavuot, will we change?

In our newsletter you’ll find some exciting news from one of our valued supporters, as well as exciting events coming up, celebrating the summer season that is upon us. And as always, feel free to reach out to say hi, to ask questions, and to get involved.