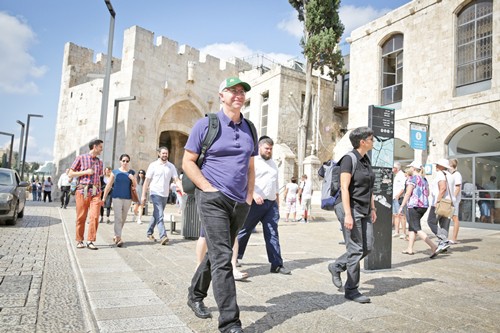 On our Hakhel tour of intentional communities last month, our small group bonded quickly. With representatives from Baltimore, Boston, New York, Philadelphia – as well as Mexico, Ukraine, and Russia – we easily bridged our linguistic and cultural differences (everyone speaks some English and everyone enjoys good food).

At Degania, the first kibbutz, founded in 1909, we had the opportunity to speak with Muki Tzur, one of the foremost leaders and historians of the kibbutz movement. Now in his 80s, Muki spoke with a deeply grounded knowledge and wisdom about what it means for Degania to now be entering its 6th generation. He also explained how the “poison of nostalgia” freezes the past into a false ideal, and he drew the distinction between testament and heritage: testament is an approach to the past that says “this is the way things were and must be, therefore I will tell you what to do”, while heritage says “I trust you to look at our shared past, and decide what to keep and adapt for your future.” The gifts history has to offer are insights into how people of the past thought about the future; across time, people are always thinking about the future, that is the thing that stays alive.

Back on the bus, the discussion continued, focusing on the question of how communities adapt and survive over time, how heritage passes from generation to generation, and the how to reconcile the tensions that seem to inevitably arise between generations.

We next visited Kibbutz Mishol, the largest Urban Kibbutz in Israel, with about 75 adults and 75 children. Mishol was formed by several smaller groups banding together to form a larger group – a common theme of the trip – to live in one of the poorer neighborhoods of Nazareth Illit, which is one of the poorer cities of Israel. We visited with founding members Anton Marks and James Grant-Rosenhead, and learned about their model of shared culture and economy, and their common commitment to a mission of tikkun olam, repairing relationships and repairing the world, largely through work in education, social work, and healthcare in Nazareth Illit.

Back on the bus, the discussion continued, with the benefit of having James as our tour guide. One question I focused on is whether the mission is to be a Jewish community, or do we need to have a larger social mission? James’ perspective is that being Jewish for the sake of being Jewish can become a kind of circular logic that often feels too insular and can drive people away. Therefore, it’s important for a community to have a mission outside of itself. He suggests that committing to such a mission, something larger than oneself and outside of oneself, and working on it together, in fact makes the community more Jewish.

I’ve subsequently discussed this question with Roger Studley, who has a friendly disagreement with James on this question. Roger is creating Berkeley Moshav — Jewish cohousing in Berkeley, California – and partnering with me to create Boston Moshav — Jewish cohousing in Boston.  Roger’s position is while an external social mission can enhance the purpose and cohesion of a community, what’s important is that a community has a center, an organizing principle in which, to quote Buber “people stand in a living reciprocal relationship both to one another and to a single living center.” Roger suggests that, at least in the context of creating Jewish cohousing in the US, the process of building, engaging in, and sustaining a Jewish community is a mission, a single living center. It provides the focal point and sense of purpose for a community without adding an explicit social mission.

At Garin Shuva, the community with an eco-mission that Aharon Ariel founded, we were exposed first-hand to life within the Gaza Envelope region. After touring the community, including a charming visit to the Waldorf elementary school, we sat down with Aharon in his courtyard, where he shared some of his own experiences and lessons learned on issues of governance and leadership. He told us about the tension within the community around the right balance of structure and bureaucracy, how he found himself in the minority on this issue (most people wanted less, he wanted more), and how he ultimately had to let go of this fight. This connected to some thoughtful reflections on his experience as founder and leader, and the necessity that this role evolve in order for the community to move forward. As the day continued, and we visited the Reshet, an organization that aims to keep young university graduates in Beersheva through community art projects and installations, the discussion continued around leadership and action in community.

As I’ve reflected on the most important lessons from the trip – what can I take back with me to help me build Boston Moshav? – the theme that emerges is the power of discussing and reflecting on shared experience as a group. My thinking here is grounded in John Dewey and experiential educational theory, in which “educative experiences” allow individuals to test their understanding and explore new ideas through interaction with the environment. The big idea is that as we engage in a process of inquiry, we go through these experiential learning cycles that consist of action, reflection, conceptualization, and testing/practice…and then on to a new round of action. In this way, concrete experiences provide the basis of observations and reflections, those reflections are then distilled into abstract concepts which can guide practice, thus initiating a new cycle of action.

This process of reflection with a small group was the most powerful part of the trip for me. My goal now is to continue these cycles of reflection, learning, and action through Hakhel, and through the process of creating a Jewish Cohousing community in Boston. Boston Moshav is having it’s kickoff on Sunday, December 16 and folks can learn more at urbanmoshav.org/boston.

Jonas Parker, PhD, manages the finances and operations at Commonwealth, a mission-based “innovation shop” that uses human-centered design principles to build financial solutions to help financially vulnerable Americans. He also has extensive experience as an educator and in curriculum design, including working as a public high school math teacher. Jonas lives at Jamaica Plain Cohousing, the only cohousing community in Boston, with his wife and two children.