Every year, Ramah campers leave at the end of the summer having learned new things that they can incorporate into their lives at home. It could be more Hebrew, how to chant Torah, or how to do a layup on the basketball court.

In the last decade, campers have also been coming away with a heightened awareness and deeper understanding about where their food comes from, and how their eating choices impact their bodies and the environment.

“We are trying to lift the veil on where our food comes from,” said Rabbi Eliav Bock, director of Ramah in the Rockies, one of the Ramah camps at the forefront of making its food sourcing more transparent and helping children and young adults make more informed decisions in nurturing themselves and taking care of the earth. 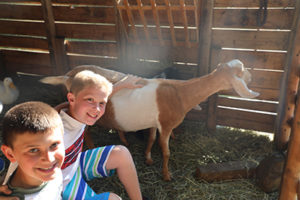 Ramah camps, as well as the USY on Wheels summer program, are increasingly incorporating experiential educational opportunities for learning about concepts like organic farming, ethically sourced meat, fair trade practices, farm to table eating, waste reduction, and composting — all couched within the outstanding Conservative Jewish educational framework for which these summer programs are known.

A number of the Ramah camps have on-site farms or gardens where staff and campers work together to grow fruits and vegetables for consumption either in the chadar ochel (dining room) or at cookouts. Campers from all edot (divisions) help out with planting and harvesting, with older edot usually in charge of daily watering and weeding. In some camps, there is even a special agricultural track for older campers who want to specialize in gardening and farming.

“This summer was my first experience learning about agriculture and organic farming. One of the most exciting aspects of it was growing our own vegetables, like zucchini and tomatoes. We would then make fresh food like organic salads with the vegetables we grew. Learning how to weed and water the garden made me realize how we take healthy food for granted…I plan on taking what I learned back to my home and will grow a garden,” said 10th grader Rebecca G. at Camp Ramah Darom in Clayton, GA.

“Not only did we learn how to grow and maintain our own garden but we learned how to lead a sustainable life, and the importance of doing so. Cultivating and harvesting my own food allowed me to take a step back and appreciate where the products I use and eat every day come from….Now that camp is over, I continue to take advantage of all that I have learned and have even signed up to do volunteer work at a local garden,” said fellow Darom camper Abby M.

Rabbi Sarah Shulman, director of Camp Ramah Galim in Northern California, loves that her camp is located in an agricultural region between Santa Cruz and Monterey. Not only do the campers and staff members get to tend the camp’s garden, but they can literally see people working the various organic farms surrounding the campus. Sometimes campers bike to nearby u-pick farms so they can bring back even more produce for their farm-to-table eating.

“The kids are the most excited when they get to see food they themselves grew on the food line,” Shulman noted.

At some of the camps, farming extends beyond organic fruits and vegetables. For example, for the past five years Camp Ramah in the Berkshires has had a farm where campers help raise animals, including egg-laying chickens, milking goats, rabbits, and ducks. In addition, the camp has a beekeeping program, through which the campers learn about the importance of the pollination cycle for food production. A beekeeper comes to camp once a week to run workshops at the outdoor hives and to demonstrate honey extraction at the indoor teva (nature) center. The plan for next year is to acquire protective bee suits for the campers who wish to take a more active role in the outdoor workshops at the hives.

According to the camp’s director of outdoor education Seth Adelsberg, the farm is not only a place for the youngsters to work. “It has become an outdoor sanctuary. It is a place for the kids to feel connected to nature, and where conversations about food and the world come up organically,” he said.

The majority of the produce consumed at the camps is not grown on site, which means that leadership needs to make decisions about what kind of produce to order for the kitchens — and assess the associated financial repercussions.

“Our food budget is higher per meal than at many other camps,” said Shulman, who is able to source many organic fruits and vegetables from local farms and has organic kosher meat shipped in from outside the area.

Grow & Behold, a distributor of glatt kosher meat raised on pasture on family farms with no hormones or antibiotics, supplies meat for Ramah Berkshires. “The majority of our ground beef comes from them,” Adelsberg said. 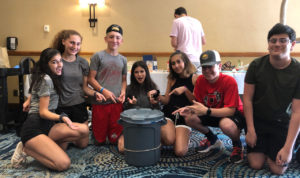 Committed to serving no commercially-raised meat, Ramah in the Rockies sources red meat from Grow & Behold, and also brings in frozen chicken raised on a New York family farm. However, unlike the other camps, Ramah in the Rockies limits meat meals to once or twice a week. For most meals, the camp relies on plant- and dairy-based protein sources.  “Americans are addicted to animal protein. It is about raising awareness of how our food choices affect our bodies, our wallets, and the world around us,” Bock said.

Jewish values and texts related to these issues are integrated into the environmentalism and conservation activities at all of these Ramah camps. Campers learn to be shomrei haguf (“guardians of our bodies”) and shomrei ha’adama (“guardians of the earth”). They learn the appropriate blessings to recite as they pick and eat the vegetables they grow. They learn mitzvot, such as the requirement to feed one’s animals before oneself, and they review the laws of kashrut, such the requirement to examine leafy greens for insects. At Ramah in the Rockies, the older campers even witnessed a shechita (kosher slaughtering) of some of the chickens raised at the camp.

One of the mitzvot the camps focus on is bal tashchit, the prohibition against destroying the environment. This includes minimizing the use of single-use paper and plastic goods. At Ramah Galim, only compostable paper products are used. Ramah in the Rockies uses real silverware and china dishes in the chadar ochel. “The kids set the tables like they are at Downton Abbey,” director Bock half-joked.

It also means taking a serious look at how food waste is dealt with after the growing and eating is done. Many of the camps have set up composting bins for organic waste.

At Ramah Galim, everyone is expected to separate what’s left on the table after meals into liquid waste, food waste or recycling. Compost is given to local farmers.

Ramah in the Rockies switched over from composting (which didn’t work at high elevation and was too slow and labor intensive) to the quicker bokashi method, which uses microbes to ferment food. This is used for all the camp’s fruit and vegetable waste, and takes only 30 days to achieve full decomposition. 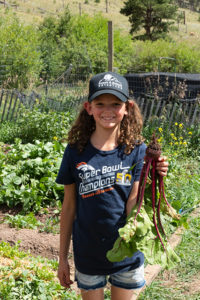 USY on Wheels staff member and Foundation for Jewish Camp Fellow Ethan Feuer introduced composting to the cross country travel program for the first time this past summer. A 20-year-old senior at SUNY Binghamton, Feuer was dismayed at how much food was thrown out on the program during previous summers. Inspired by the memory of his friend and fellow USY international board member Hannah Weiss, who was killed in a plane crash in Costa Rica in 2018, Feuer set up a pilot composting project on one of the Wheels buses.

“Sustainability and environmentalism were really important to Hannah, and I became even more conscious about these issues after she died,” Feuer said.

Feuer bought an inexpensive 10-gallon garbage bin from Home Depot, along with biodegradable garbage bags and deodorizer. The bin, which was given the nickname of “Cedrick” by the teen participants, was kept under the bus. The teens were expected to deposit all fruit and vegetable waste to the bin, which they readily did once they got the hang of it. In fact, they were so successful that they collected 244 pounds of organic waste — 144 pounds more than the Feuer had set as a goal for the project.

Feuer contacted ahead of time a variety of organizations along the route that agreed to be drop-off points for the compost waste. These included synagogues, hotels, resorts, composting sites, and organic markets.

“The kids ended up eating healthier because of this. Since we had a way to properly dispose of organic waste, we bought more fruits and vegetables,” Feuer said.

Feuer said that 75% of the USYers on his bus had never heard of or done composting before. “Now I hear from the teens that they miss Cedrick. I hope that each bus will have a bin next year,” he said.

Thanks to these initiatives and the culture at camp, young people are coming home from Ramah and USY on Wheels with a raised consciousness about environmentalism, conservation, and sustainability. They are forming new and positive habits surrounding mealtime.

“Exposure to the natural world creates a whole different relationship with what you eat,” said Adelsberg. “The more we do where the kids are directly connected to where their food comes from, the more grateful they are for it.”

Reb Isaiah at the March, and Rob Kutner on Daf Yomi…
All you need for a glorious Tu B’Shvat