I would like to begin my Blog contribution with a little background. I first heard about the Israel Ride a few years ago from a friend in West Hartford, CT who is a member of our Shul. He mentioned that he was in training for a bike ride from Jerusalem to Eilat. I thought he was meshuga, and didn’t give it a second thought (Neil Kochen-his wife Sharon was on the 2011 ride). Fast forward a few years, and another friend, an alumni of many rides (Bruce Stanger), also from our Shul, started talking to my wife Nancy into going on the ride. She has an adventurous spirit, and gave it serious thought. In the Summer of 2010, she bought a bike and began riding. I was still not convinced, and they did not try to talk me into doing the ride. On my first trip to Israel, in 1969, I spent 12 hours on an Egged bus going from Jerusalem to Eilat. I could not even imagine the craziness it would take to ride a bicycle over 250 miles through that desert. I grew up in Tucson, AZ, and know all about riding through the desert-or so I thought. 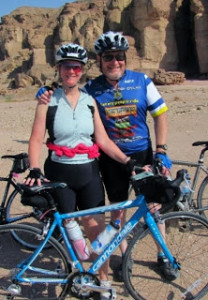 Nancy signed up for the ride, and was planning on going alone in 2011. In the Spring of 2011, I bought a hybrid bike and began riding, just to keep her company. It was the first time I had ridden a bike since I had learned to drive (a long time ago). We rode together, and then when I got in shape and was enjoying myself, I started riding both with her and on my own. When I saw how I could ride 25-30 miles in 2.5 hrs without adverse affects, I began thinking about joining her.

In late June 2011 (just after the prices went up), I had convinced myself that I could get in shape for the ride. The idea of riding 40-50 miles a day was not overwhelming. I asked her permission to join her, as I did not want to encroach on her adventure. As expected, she was thrilled to have me join her, so I signed up and began training. We routinely rode 20-25 miles each day on the weekends, and tried to get in rides during the week. We both bought road bikes (Cannondales) and were thrilled with the increase in speed and the decrease in rolling resistance. We bought our plane tickets, started fund-raising, made arrangements for the pre- and post excursions, and were ready to go………..until….

Remember the Halloween Blizzard in New England in 2011? It occurred 5 days before we were supposed to leave. Our house had no electricity for the 5 days before we left. We had no heat, no washing machine, no lights, no cell phones, nothing. We had to pack by flashlight. Luckily, I had arranged to have our bikes packed by a local bike shop that has a generator, but they had no phones either. Luckily, I was able to pick p our packed bikes the day before we left. Our dog went to a kennel that had a generator and heat- she had heat, we didn’t. Our house was without electricity for a total 11 days.

Through a lot of resilience, flexibility, and temper-control, we made it to Kennedy Airport to check in at El Al on time. From then on, everything was FANTASTIC. We arrived at Ben Gurion, we were met by someone from the Ride Staff took our bikes for transport to the launch hotel. Nancy and I spent Shabbat in Jerusalem, walked, toured, and soaked in the ambiance.

Speaking about the Ride Staff, they are the people who make this fantastic experience even more fantastic. Not only with the ride support, mechanical help, food, shelter, and water stops; but the Ride Staff make it clear why we should support the Arava Institute. Before meeting the staff, I really wasn’t too clear on what charities we were supporting. I knew it was at a Kibbutz in the Negev, but that was about it. One of the women I met was an alumna of the Arava Institute of Environmental Studies. On the first evening, we had a conversation about why she was doing this. She said something that I will never forget. It boiled down to, “ Politics are Politics, but people are people.” She was a Palestinian, from the West Bank. It took her 2 days to get to Jerusalem to join us, because of all of the checkpoints and border crossing hassles. She felt it was well worth it, because she is meeting and working with the people who will be the decision-makers. These young people, the students at AIES, are the future of the Middle East. By learning together, living together, and working together, THEY will be able to solve the problems. Politics boils down to individuals. The more we get to know one another, the easier it will be to find solutions.

I am now in training for the Israel Ride 2013. Due to work and other commitments, Nancy can’t join us this year. In my next posting, I will share my Ride experiences and tips for first-timers.