This past week, the Urban Adamah farm in Berkeley installed an aquaponics gardening system in their greenhouse. Aquaponics is a soil-free farming system that combines hydroponics (growing in a medium of water and dissolved nutrients) and aquaculture (fish farming). In the combined system, the fish add nutrients to the water that is used to grow the food (their waste is high in nitrogen, a much needed plant growth stimulant), and the overall holistic system provides a harvest of both mature veggies and fish. Read more about Urban Adamah’s system here: http://blogs.forward.com/the-jew-and-the-carrot/179511/when-fish-are-farmers-not-food/

This method has become a highly productive farming system in areas where soil quality is low and where land access is limited. It has also become a permaculture technique utilized on farms trying to reduce waste, and create more closed-loop systems. The interesting aspect in regards to Shmita is that aquaponics, at least on the surface level, seems like it can be practiced without alteration during the Shmita year. The agricultural implications during the Shmita year is that no soil can be tilled and no seeds can be sown. Obviously this raises a question of where the food will come from during this year. One stance we are taking at the Shmita Project is a strong investment in establishing local perennial food systems (fruit/nut trees, wild edibles), as harvesting from these food sources would not be a problem during the actual Shmita year. But what about alternative, creative growing methods, such as aquaponics?
The laws of Shmita do specifically refer to working the land (as in, actual soil connected to the earth). And hydroponics is farming without soil so yes, technically, this type of farming is ok even on a Shmita year. It is not so much a ‘legalism’ around the laws of Shmita as Heter Mechira might be (symbolically selling the land to a non-Jew for the year) but what about the intention of the Shmita year? With modern forms of aquaponic/hydropnic farming, the land still rests, but the farmers do not necessarily have a chance to rest, nor do our technological systems. So if Shmita is a sacred time created for ‘rest’, then what is the actual intention of this rest? Is it for the land only? Is it for humanity, as well? Is it for any systems that we usually control & dominate?
Another question is this: Shmita also creates a cultural opportunity for exploration and introspection on our societal/personal relationship with food, specifically to the ways we produce, harvest and distribute food. From the basic sense of the laws, it seems this year is meant as cessation from normative agriculture practices (tilling, seeding, harvesting for sale, private ownership of land & harvest, etc) and, in its place, an invitation to re-establish deep connections with the wild origins of food. In fact, the laws fully support, and even invite forth, harvesting from the wild plants, and the perennial plants (those plants that are producing even without our agricultural efforts). So while modern forms of hydroponics do not come with the need for tilling, etc, it is still a human-created agricultural system, controlled by us and our technology…it is very far from a ‘wild’ system. So how does this connect to the deeper intentions of Shmita as a time to step away from our dominance in manipulating the way food is grown? (We can ask the same about the other ‘kosher’ farming of Shmita: rooftop gardens, raised beds, etc…any farming medium that is not connected to the earth, even though it may use soil). 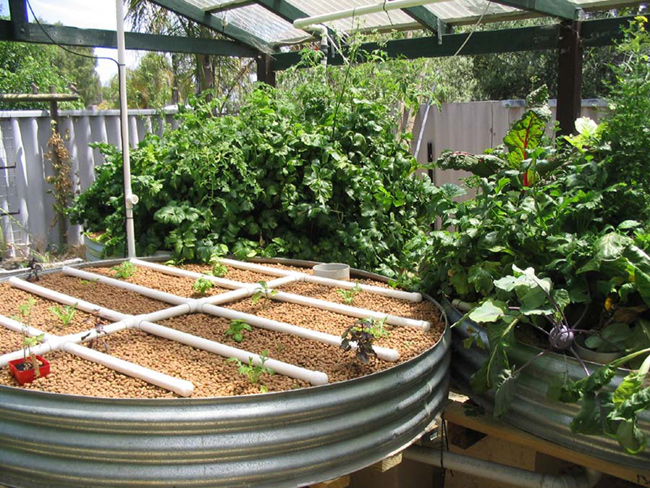 A last really interesting question is about water: Lets say we are talking about a really simple hydroponic system, one that is small-scale and is powered by gravity, instead of a large-scale technological system. So even using this system, the farmer will still have plenty of moments to rest. And in this system, there is not much ‘manipulation’ or ‘dominance’…it is actually a very creative, smart and simple design of natural patterns, so we can say this falls in-line with the ‘wild’ intention of Shmita. OK, so even in this simple system, there is still the question of water. And this raises tons of other questions about the way the Torah relates to controlled irrigation, flooding, and canal systems in growing food. We, as ancient Israelites in a hilly land, relied completely on rains (something we cannot control), while our counter-ego in Egypt (an agricultural empire and symbol of our slavery), was known for their success in taking advantage of the Nile’s annual flooding, by creating canals and irrigation ditches. From what I understand, they were the creators of the ancient hydroponic systems. Also, consider the power of Babylon: Nebuchadnezzar, the king of this empire (which was responsible for the destruction of the first temple and our first exile), is also known as the architect of the first-famous hydroponic system, the Hanging Gardens of Babylon. Some powerful associations there, right? Just as Shmita is an exploration of or our relationship to soil/land (as a resource and life-giving force), so too, we can say Shmita extends this invitation to explore any medium we use to grow food: and this is water, as well. What would it look like to give our systems of water-control a rest on the Shmita year? What would a more ‘wild’ healthy relationship to water look like? How does our use & control of water (similar to our use & control of land) create systems of dominance, class-power, and societal inequality?
In my opinion, Shmita is about cultivating healthy relationships between self, community, nature & spirit. So with all the questions I’ve raised above, there is much to explore around hydroponic systems, not just in connection with Shmita, but in the perspective of healthy relationships. Personally, I am a big fan of the permaculture-hydroponic systems: low-technology, small-scale systems, using rain water catchment/greywater, in connection with aquaculture (fish systems), gravity feed, etc. If we can find a way to link such systems to Shmita-growing methods, while keeping the intention of Shmita alive & well, all the better.

Yigal Deutscher is an educator, farmer and permaculture designer. He has participated in the Adamah fellowship, and trained with the University of California, Santa Cruz (Center for Agroecology & Sustainable Food Systems), as well as with the Permaculture Research Institute in Australia. Until 2010, he was the farm manager and permaculture educator at the Chava v’Adam farm in Israel, where he also founded the Shorashim/Eco-Israel apprenticeship program. He is the founder of 7Seeds, an educational platform combining Jewish indigenous teachings & Permaculture Design strategies, as well as the manager of Hazon’s Shmita Project.

The Land Shall Rest: Exploring Shmita in the Diaspora
Discovering the Israel Ride