Always dreamed of driving a Ferrari or a Hummer? And by driving, we mean biking. Well as crazy at it may seem, Japan is making this dream come true. Global Innovation Company will soon distribute a line of bicycles bearing brand names of foreign and American car manufacturers: Ferrari, Cadillac, Chevrolet, and Hummer, to name a few. In hopes of reaching a younger generation of cyclists, Katsuyoshi Ikeda founded this company thinking that many would be more inclined to buy well-known-brand name bikes. And with 170,000 of these bikes bought last year, Ikeda’s trendy idea seems to be working quite well! Read more about riding in style here!

summer camps can come to a bicycle education center for weekly two-hour training sessions. Camp Bike New York includes campers from numerous groups including the Police Athletic League, Children’s Aid Society and the YMCA to bring kids out for this program.  With nine bicycle education centers, this program is expected to reach another 2,000 New York City children throughout the summer!

Check out all the amazing events, programs, and classes Bike New York has going on here!

Fact: 54% of all trips New Yorkers make are less than two miles. Do you know how easy it is to bike two miles? Well Citi Bike, a program expected to launch this summer, could extraordinarily change transportation here in New York City! Citi Bike is a self-service system that provides members with easy access to a network of thousands of bicycles. Pick up a bike close to home or work, ride, then return it to any of the hundreds of stations to be located throughout the city. Citi Bike will consist of 600 stations, 10,000 bikes in Manhattan, Brooklyn and Queens.

In Cross-USA ride news, our very own rider Serene Victor shares how her relationship with time, distance, and space has evolved on the ride. Read her inspiring post here! 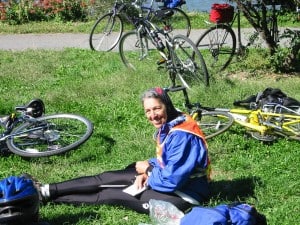 (Keep on biking folks, but don’t forget it’s hot out there! If Ruth Messinger, director of AJWS and board member of Hazon, can take a break so can you!)

Interested in joining the People of the Bike in New York? Join Hazon for a free summer ride on July 22nd or August 12th or for our annual New York Ride, Labor Day Weekend.