House panel begins voting on 5-year farm bill this Wednesday, July 11th. The panel finds itself deeply divided between Republicans, who are fighting for cuts to the food stamp program, which has doubled in costs over the past 4 years, and Democrats who strongly believe that any cuts to this program will result in people going hungry. While the Senate passed its version of the five-year farm bill on a bipartisan vote last month, the future is less certain in the House…read on here! 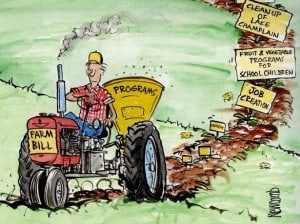 An interesting article from the Star Tribune, a local paper from the Twin Cities(where Cross-USA Ride will be this weekend!), discusses an initiative, Healthy Food Financing, that, if included in the new farm bill, could have huge impacts on communities everywhere. The initiative, already passed by the Senate, would provide one-time grants and loans to a variety of healthful-food retailers, from full-service supermarkets to farmers markets, that want to set up, renovate or expand outlets in low-income urban or rural communities. This initiative helps boost employment and maintain the vitality of our cities and counties. To read more about this initiative and how its already seen success on smaller levels, click here!

And furthermore, This Wednesday, July 11th, the House Agriculture Committee plans to mark up its farm bill. However, there could be a few obstacles in the way of immediate passage of the bill. Although the Senate cleared its bipartisan farm bill just last month, most Republicans(including Senate Minority Leader Mitch McConnell) voted no. Even those who are optimistic about the passage of the bill are still worried that all the opposition, such as Speaker John Boehner’s distaste for farm subsidies, will be a huge obstacle.  Read this article for more news and reasons for opposition to the farm bill.