Rides, routes, trends, and friends. The Chainlink.org connects people in Chicagoland through bicycling.  An online community with more with than 7,500 members, The Chainlink is now teaming up with Hazon to spread the word on cycling for sustainability.  And just in time, as Hazon’s Cross-USA Ride pedals through Chicago.

The Ride – currently wheeling its way over Wisconsin – will join members of the Jewish and cycling communities next week to learn about sustainable food initiatives that have Jewish roots in Chicago.  Hands-on learning opportunities include a Fermentation Frolic and Feasting/Fasting on Tisha b’Av.

Hazon’s events join the schmear of activities that fill up The Chainlink’s calendar of bike events every day.  The website’s Calendar features a gamut of group bike rides, from neighborhood rambles to semi-pro races.  Plus, on a user-powered platform, if you don’t find the perfect ride to join, you can simply create your own.

Local bike rides are among the most popular activities within The Chainlink community.  Members also use interactive web features to form riding groups, swap gear, find advice and kick up some dynamic dialogue in a no-holds Forum.  Teams recruit racers, neighbors loan out bike trailers, and advocacy organizations drum up support for sustainable transit campaigns.  Joining the site – for everyone – is entirely free. 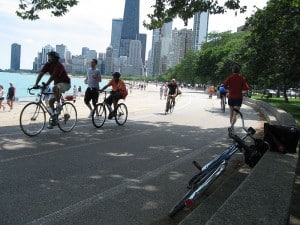 The Chicago Lakefront Trails are paved paths separated from the road for bicyclists, walkers,
runners, and in-line skaters.

Spearheaded by alumnae of Hazon’s Israel and New York rides, The Chainlink has served as a one-stop resource for bicycling information since 2008.  The growing community supports the seasoned cyclist and the bike-curious alike, providing people with the tools to get offline and into the saddle.

As The Chainlink gains momentum it gives voice to thousands of riders, meanwhile grabbing the attention of elected officials, civic planners, environmentalists, and others seeking the latest word in the bike lane.  Some cyclists are foodies and farmers, parents and rabbis, or people riding to create a more sustainable world.  But as any bike-riding activist will tell you: camaraderie is key to success.  Hazon members are invited to sign up today and join the ride.