By Hazon on July 19, 2012 in California, Cycling, From Our Friends, Recommended Reading, Teens 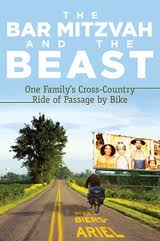 Join Matt Biers-Ariel, author of The Bar Mitzvah and The Beast: One Family’s Cross-Country Ride of Passage by Bike, as he tours Bay Area REIs to give a humorous and poignant talk and slide show about the book.The book’s genesis came from his son’s refusal to have a Bar Mitzvah. Instead, the 13-year-old rode a bike across America to deliver a petition to Congress on global warming. Mountaineers Press recently published the book which has garnered excellent reviews from both mainstream and Jewish press.

Register for Camp Ekar
Cycle through Chicago on The Chainlink!