By Hazon on April 14, 2017 in Hazon Seal of Sustainability, Hazon Seal Spotlights

by Zach Goldberg, JOFEE Fellow at Ramah in the Rockies and Bonai Shalom

On the way from Philistine to Beersheba, Isaac digs a series of three wells that were previously excavated by his father, Abraham. At the first well, Isaac meets some people who claim the water as their own. Isaac names it esek, “contention.” At the second well he digs, they meet people who also were not happy about the project. He named it sitnah, “enmity.” At the third well, they find people who were not bothered. He names it rechovot, “spaciousness.”

Rechovot is what Isaac was after. He wanted to carve out space for real connection. Isaac understood that the first two wells, associated with fear and scarcity, were not for him. Living there would not allow life to flourish. 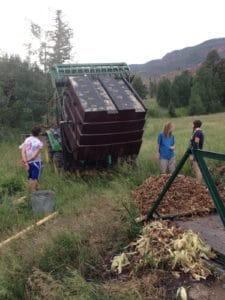 Last summer at Ramah in the Rockies, I started a project on how to effectively process organic waste on the campsite. On becoming a member of the community, I was pretty surprised that the camp didn’t compost everything. Despite having tons of land, environmentally conscious people, and a farm, composting is not something to take for granted. The main setback is with some of the local residents of the site, the bears, who have created a enormous challenge. Bears want to eat our food, while we want to compost and make soil. The previous solution, two converted ice makers turned into compost tumblers, successfully took away the food from the bears but have failed to handle large amounts of organic waste and make a finished product.

My friend Robyn Goldstein had an idea an idea from the far east, commonly called Bokashi. This name is a Japanese word that doesn’t really translate well. A few of the translation options are “shading off,” “gradation,” and “fermented organic material.” My guess is that the last translation came after the development of process, which is basically taking any and all organic materials and anaerobically fermenting them in a similar fashion as cheese or sauerkraut. 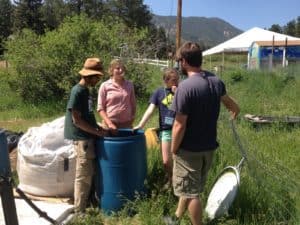 The process is quite simple and avoids a lot of the management issues of a traditional compost pile. You do not have to manage the carbon to nitrogen ratio (or browns to greens) or turn it. Plus, Bokashi can handle meat and dairy, while only taking 10 to 20 days to ferment. It can be done inside or outside, in small buckets or very large.

However, in our trials it hasn’t been all easy. The bears were definitely curious to check out what we were doing. Trying to figure out what to do with all this fermented material also is a major challenge. But for the most part, this has been a great learning opportunity and worth taking to the next stage. 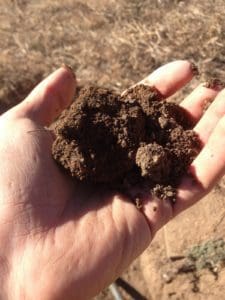 Finished Bokashi compost in my hand.

With the help of Hazon, Ramah in the Rockies is continuing this project and offering support for other Jewish institutions interested in Bokashi fermentation. Ramah will be able to process up to 500 gallons of organic waste this summer at any given moment, or up to 2000 gallons across the summer. Moreover, The Sustainable Skoolie Adventure bus will be diverting valuable material from the landfill this summer, using Bokashi all around the country at other summer camps, community centers, festivals, and farmer’s markets.

I imagine myself redigging the wells of my ancestors. Sometimes I meet contention. Sometime I meet enmity. Sometimes I create space for connection.

Zach Goldberg is a JOFEE fellow at Ramah in the Rockies & Congregation Bonai Shalom. Zach is a farmer, educator, and community organizer from Philadelphia, where he experienced the city’s rich cultural history, prominent civic life, and innovative urban design. After a trip to one of the oldest urban farms in the city, Zach found his passion for the soil and has run with it! He recently worked at Eden Village Camp, where he designed innovative and regenerative garden spaces. He has worked on groundbreaking food system projects around the world, including Israel, Barbados, and Montreal. Zach holds a B.Sc. from McGill School of Environment.