Last week many of us made a trek to our family’s, friend’s or parent’s home. Exiled from our ‘normal’ lives, we may have felt like slaves to the lurking particles of chametz, doing their best to afflict our Pesadic kashrut, to the pyramids of dirty dishes that plagued the sink, to our seders, where we sat for hours, the outside world shrouded in darkness. As much as we may love our families and friends, we may have felt exceptionally free as we left the houses we grew up in, the livelihood in which we find comfort, and wandered to our potentially uncertain, independent lives.

Over here on Dennytown Rd, our very own Eden Village Farm-Educator Apprentices are definitely wandering into uncertainty. Four farmers who have never been to Eden Village, potentially never ‘slaved away’ under the sweltering sun before- acres of shadeless beds surrounding- have just arrived to spend 40 squirrel years (6 months) doing just that! After some faith and sweat, their manna will grow up from the earth, as it did many years ago when I was a farm apprentice. And that, dear reader, brings us to the parsha.

This shabbat is Parshat Sh’mini, ‘Sh’mini’ means ‘8th’, and doesn’t seem to have great significance except that on the 8th day of their wandering, the Israelites were introduced to sacrificial offerings. Oooooooh. Ahhhhhhh. Moshe called a few select people together to The Tent of Meeting and taught them how to give offerings to the Divinity, for themselves and also for the rest of the Israelites. Two people named Nadav and Avihu tried to give their own ‘strange’ offering, but were immediately killed by God. Moshe continues teaching how to give offerings in the Tent of Meeting, and tells Aaron and Co. to eat part of the sacrificial offering, after God has consumed the rest.

Pause. Let’s get some contemporary Hudson Valley context. Initially, I found this parsha lackluster and unrelatable. After some pondering, the parsha grew on me and I started linking it with the current going-ons at Eden Village. While we, over here in Upstate-ish New York, obviously do not destroy people for making mistakes, the rest of the sacrificial shebang is a little too similar to the current happenings on Eden Village Camp’s farm. After months of preparation, we are just beginning this season’s farming journey. Now that the farm-apprentices have made their exodus, our Farm Director, Ayelet, teaches them how to give seed offerings to Mother Earth. These farmers gather daily in their own ‘Tent of Meeting’ to discuss the day’s tasks and then head to the farm and complete them. In time, once the soil has fully accepted the offerings of seeds, water, and compost, the farmers eat the vegetables of their labors, just as the biblical people ate of their offerings. 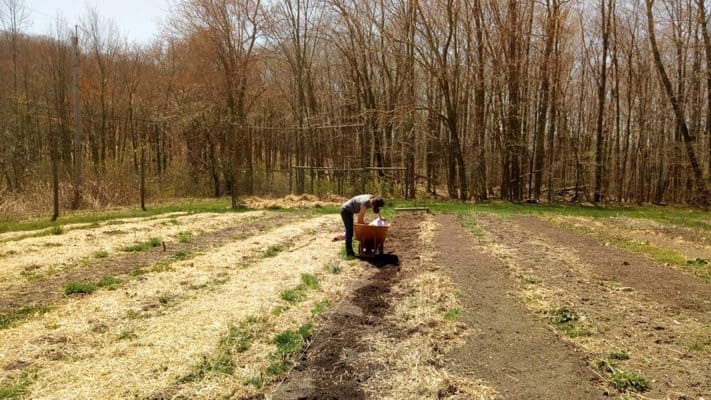 Ayelet, Moses of the Farm, prepares the ground for an offering of seedlings

The Parsha continues on to distinguish between kosher and non-kosher creatures. Spoiler alert: The chickens that we received a few days ago are kosher- fit to eat- while our rabbit, vole, and hedgehog rivals are not. We may really want to eat them so that they stop eating our brassicas, but alas, for those who follow the laws of kashrut, they are not fit to eat. Speaking of fit to eat, now that your digestive system is hopefully back on track, answer honestly: is matza really fit to eat0 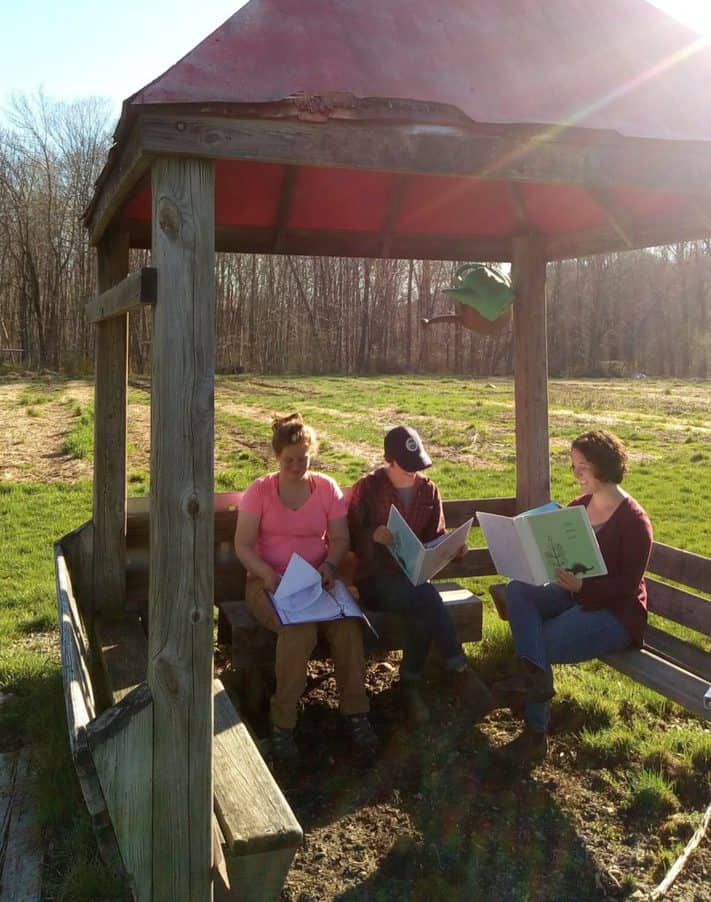 Farmers gather in the “Tent of Meeting” to discuss farm plans

I’m not so sure.
I am sure, however, that right here, in the adolescence of this 2017 farming season, when people are deciding between CSAs or grocery stores, conventional or organic, Local or not, the Torah introduces the concepts of edible and contaminated. Coincidence? I think not! In this time of pesticides, herbicides, monoculture, and GMOs, the difference between edible and contaminated foods can be tricky and confusing. As we buy and grow food this season, I bless us all to buy (or grow) food with determination and intention, to not wander for forty minutes in the grocery store with a cart chock full of foods contaminated by chemicals as strange as Nadav and Avihu’s fire.

Ren Feldman began her farming journey at Eden Village as a Farm-Educator-Apprentice right after passover 3 years ago. In between returning to Eden Village every summer since, she roamed the Northeastern hills teaching at Teva and the Ashokan Center. Now she is thrilled to help run the apprenticeship and programming at her favorite place on earth, Eden Village Camp!