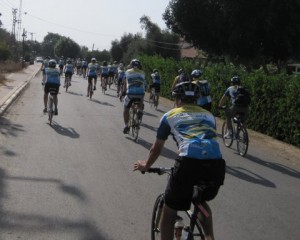 Our journey began this morning at 6 am with the traditional Hazon Ride send-off of a shofar blast. 114 of us pedaled out of the parking lot of our hotel and through the not-quite-empty-enough streets of Jerusalem, passing important government buildings, The Israel Museum, and many confused Israelis. After speeding down some incredible downhills, we made it to our first pit stop, where two of our educators on the trip, Dr. Alon Tal, founder of the Arava Institute, and Bill Slott, a member of Kibbutz Ketura, shared stories of Jerusalem’s past and present with us. Bill explained that our journey from Jerusalem to Ashkelon was one between two ancient capitals–Jerusalem, the capital of the Israelites, and Ashkelon, the capital of the Philistines. Along the way would be the site of one of the most famous biblical stories, that of David and Goliath’s battle (Ha’Ela Valley). Talk about some old pavement…Alon told us of the city of Jerusalem’s goal to be the “cycling capital of Israel,” and the progress it has made on its light rail system.

Following breakfast, we continued on our way but were slowed down considerably by a sharav, a heat wave (it was definitely between 95 and 100 degrees Fahrenheit) accompanied by a hot wind. The word sharav comes from Aramaic, and it’s root is related to “saraf,” the Hebrew root related to “burning.” Got it? These temperatures are definitely not typical for mid-October in Israel. (pssst…climate change) After lunch at Beit Guvrin, an underground ancient city and olive press factory, things cooled down, and some of us made our way to Ashkelon via bicycles, while a small group visited the city of Sderot on a JNF tour. We were all happy to see the Mediterranean Sea, and some riders even jumped right in. Definitely a rewarding end to a difficult day.

Eating for Cycling, Cycling for Eating
Who are the Israel Riders Anyway?

One Response to 104 Kilometers Later…