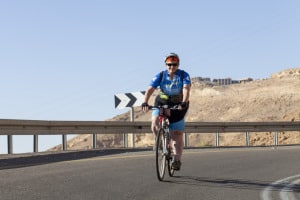 Thinking about registering for the 2015 Israel Ride, but not sure what it will be like? Read below for first hand accounts of day by day riding!

After a sumptuous breakfast at the Leonardo Hotel in Beersheva, we were bussed to our starting place, a large sandy area next to a very busy highway. There, we found our bikes by looking through a plethora of bicycles laid out nicely on the sand. We pumped up tires that needed air, and mechanics were on hand to help with problems. A car of crew members supplied sun screen and provided water for those riders who still needed to fill up their water buckets.

For the past few years, the route of the bike ride went via Ashkelon. However, due to security concerns because of the plethora of rockets that had been fired into Israel from Gaza in the past few months, the route was changed for safety concerns. Unfortunately, the new route for shomrim on the second day was mostly uphill, which was not easy for those who had chosen to be in the least challenging riding group.

After some stretches, we were on the way..for our second day of riding and touring on the Israel Ride.

Passing Jewish, Bedouin and Arab towns as well as ancient cities and desert strongholds, my bike got a flat tire. I called the emergency number and a mechanic was almost immediately on the spot, changing my tire.

Since most of the route was going to be going uphill, I decided to take the bus for awhile.

We rode south to the Yatir Forest, a large JNF forest, unique to its semi-arid setting for our quick rest stop.
The Yatir Forest was planted with goal of combating encroaching desertification and is being studied over the world as a model of how to combat climate change. It is the first ever forest in a semi-arid climate zone.

After a short pit stop and a few more miles, it was time for the downhill ride. WHEEEEEE! The road was steep and snakey and I loved it. There were strong headwinds going against me, so they helped to slow down the speed a bit. But I was zipping along enjoying the majestic view as I went.

Our final destination was lunch at a national park, and from there were went on a tour that highlighted Israel’s incredible use of waste water and desalination, while learning about the Arava Institute’s innovative projects that try to bring cleaner energy to these communities.
We then visited the River Walk in Beersheva and continued on to a guest house in the Negev, at Kibbutz Mashabei Sadeh.

After dinner, we were briefed about the next day’s ride and Stuart gave another short presentation on the relationship between JNF and the Arava Institute. I know I am biased, but I love listening to his presentations!

We are both tired but looking forward to tomorrow’s ride.