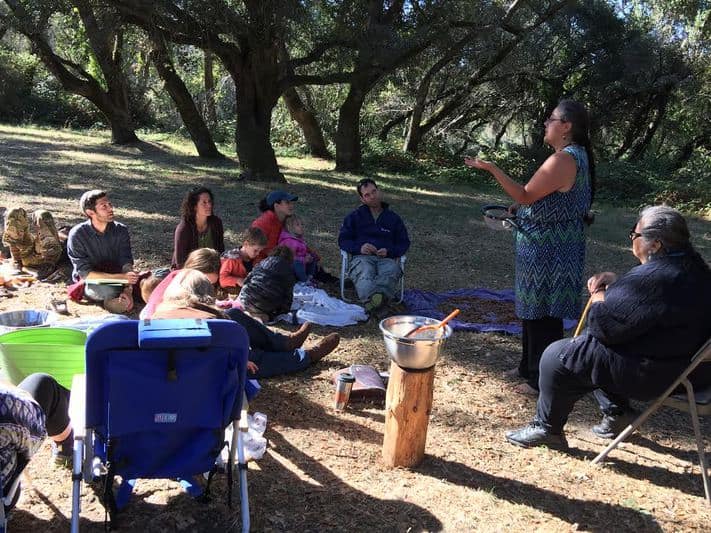 Guest blog post by Rabbi Josh Jacobs-Velde, founder of Zmanim, a local Jewish community in Northern California connecting Judaism and the natural world. He can be reached at rabbi.josh18@gmail.com“

Jews and acorn processing with Native Americans? It’s not at the top of the list when you think of things Jews do. Yet, there were about 25 of us, adults and children, sitting under the oak trees at Ragle Ranch Park in Sebastopol on Sunday, October 25, learning how to process acorns and coming to understand their place in native Pomo culture. Our teachers were Northern Pomo educator, healer, and wisdom holder Corine Pearce, and her mother Barbara.

In our part of Northern California, acorn processing is not unusual, and people tend to think of it as a cool, fun opportunity. But why do this as a Jewish activity? After reflecting on it for some time, here’s what I offered the people who gathered:

Yes, it is fun and cool, but let’s back up a minute: what are the connections between Jews/Judaism and oaks/acorns? First, like the vast majority of traditional cultures (since oaks grow almost everywhere) our tradition also can claim some connections with oak trees. In fact, this week’s torah portion, Va’yera, begins with the words, “And YHVH appeared to Abraham at the Oaks (elonei) of Mamre” (Gen. 18:1) This happens just before Abraham rushes out to greet the angel messengers.

And in last week’s torah portion, Lech Lecha, just before YHVH appears to Abraham, the Torah tells us “Abraham (then Abram) passed through the land as far as the site of Shechem, at the Oak (elon) of Moreh.” (Gen. 12:6) What we see here is that these prominent oaks were known landmarks in ancient Israel and were sites of gathering. Perhaps they were even held in special regard. Intriguingly, Elon Moreh, the “Oak of Moreh,” could also be translated as “teacher oak,” or even “oracle giver” (Etz Hayim Torah Commentary). As many know, Elon (oak) is a common Jewish (especially Israeli) first name. The practice of naming children after plants or animals is something we share with Native Californians. 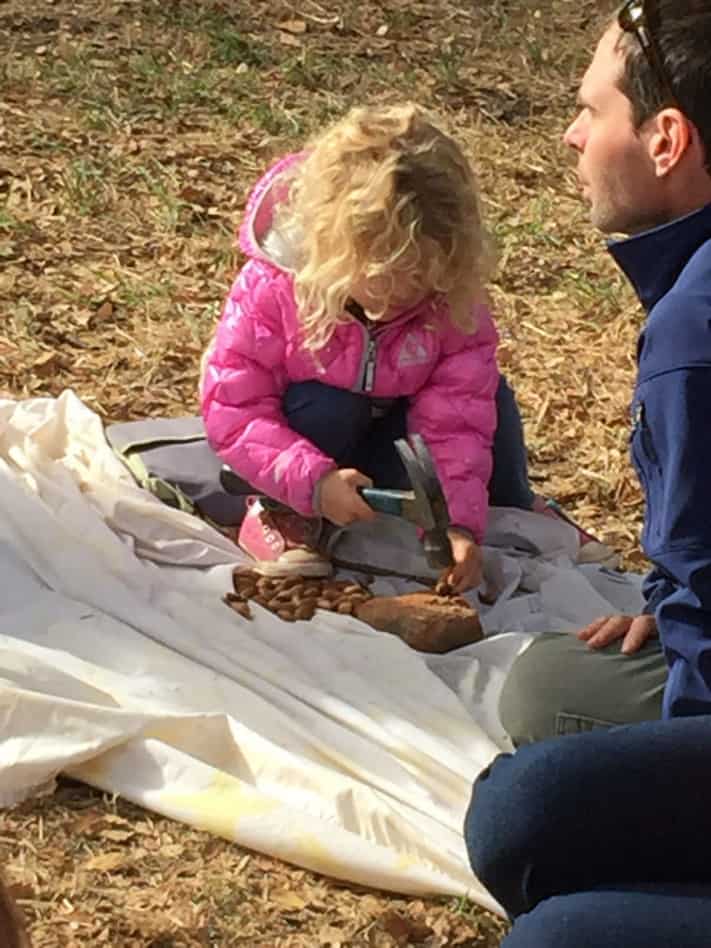 In terms of a connection between Jews, Judaism and acorns, I was hard pressed to find anything concrete. Sure, there are metaphorical connections, but I couldn’t come up with anything suggesting Jews processed acorns for food in ancient Israel. How striking, since oak trees inhabit much of Eretz Yisrael. What I did discover, however, is that the semi-sedentary Natufians, who lived in parts of what became ancient Israel between around 12,500-9,500 BCE, did indeed process acorns.

Acorns (along with pistachios) were one of their staple foods, just as acorns have been a staple food for Native Americans in Northern California. Archaeologists have found extensive acorn remains at Natufian sites near what is now Israel’s Hula Valley and also Shuqba Cave in the West Bank. Brian Fagan, author of The Long Summer: How Climate Changed Civilization, points out that as the Natufians drew on abundant wild plant foods (they harvested millions of acorns each fall, along with wild cereals each spring and early summer), they were now able to live in permanent communities and not temporary camps.

From what I learned, it seems like during the thousands of years transition to full fledged farming, acorn processing fell by the wayside for the peoples of the Near East. Perhaps it was too labor intensive? An anthropologist recorded that it took a Native Californian woman seven hours to fully process her acorns. These hours of work resulted in a little more than five pounds of edible flour (see Fagan, p. 84). Or perhaps the knowledge was simply forgotten. Interestingly, pistachios, the other Natufian staple, did remain an important food source for those in Eretz Yisrael: Jacob tells his sons to take some pistachios down to that mercurial Egyptian viceroy (Joseph) as gift when they return to Egypt with Benjamin (Gen. 43:11).

We titled our acorn processing program “The Manna of California” because acorns are quite miraculous in the balance of  nutrients that they provide, reminiscent of the mythical food of manna, which fell from the heavens and was gathered each day by the Israelites during their desert wanderings before entering the land. These little nuts contain as much as 70 percent carbohydrates, five percent protein and between 4.5 and 18 percent fat (Fagan, p. 84) They are close to a complete food – even if they do take a little longer to process into food than manna from the heavens!

Two thousand years ago a Jewish sage named Ben Zoma said, “Who is wise? One who learns from every person” (Pirkei Avot 4:1). As Jews, we have much to learn about relationship to place and the plants and animals that live in Sonoma County from the native people who have lived here so long, who have known and loved this land so well. It’s clear to me that this is something many of us are longing to do–we want to live on the land as though we are at home in it.

Of course our Jewish ancestors had a relationship of wonder and reverence with the natural world–you see this expressed through the exuberant nature praise of some of the psalms, as well as the stories of great Chassidic teachers like the Baal Shem Tov and Reb Nachman of Breslov spending hours in prayer and meditation in the woods and fields of the Ukraine. Judaism is an agricultural tradition at its core, rooted in the land and linked with the flow of the seasons, which is why we call our community ZMANIM, meaning “seasons.”

And at the same time, Jewish history for the last 2000 years has mostly been one of exile from our native land, from the land our ancestors loved and knew intimately. We lived all over the world; we moved around a fair bit.  In addition, much of the time we weren’t allowed to own land.  Jews have, of course, returned to live in Eretz Yisrael, and much of Zionism has sought to re-establish a deep Jewish love for the land and a relationship of intimacy with it.

As Jews, we are a people who hold as a deep value the healing and repair of that which has been damaged and broken, what we call “tikkun olam,” the repair of the world. I see our what we are doing here today – learning to process acorns – as a tikkun, a repair, on two levels:

The first tikkun is that in our exile, we have sometimes acted as though the only land worth knowing intimately is the Land of Israel. But that’s simply not healthy. We live here, in West Sonoma County.  In addition to connecting with the Land of Israel, we need to know and love the land upon which we live and are sustained. As Jews we can enter into a healthier relationship to land and place through this learning today. In that we can find no better mentors than the native peoples who live here. Perhaps it is overly chutzpahdik to say it, but I think learning to process acorns, under these oak trees, with native Pomo teachers, is a small tikkun of Judaism and the Jewish relationship to place.

The second tikkun is that these oaks were lovingly known and tended by the native peoples who lived here for thousands of years. Acorns were the staple food for many Native Californians. Lately, I have been reading the extraordinary book Tending the Wild: Native American Knowledge and the Management of California’s Natural Resources, by M. Kat Anderson, which should be required reading for everyone who lives in California. Anderson’s title beautifully states the thesis of her book: the California that Europeans found was not existing in a “state of wild nature,” but was meticulously and lovingly tended by native peoples for thousands of years, through practices such as burning and wild cultivation. That relationship was abruptly truncated by the settlers that came to California not long ago.

Our teacher today, Corine Pearce, mentioned to us that the oaks she knows are neglected. She tries to care for them, but there are too many for her to tend. As she told us, when acorns are not harvested, the nuts fall to the ground and signal to the tree to produce fewer acorns. When we learn to process acorns, in some small way we relink a broken connection. I believe that we make a small repair, a small tikkun. And hopefully, after we’ve learned about and eaten of the acorns and taken their nourishment into our bodies, we can’t relate to them in the same way again. When we walk the through the hills of Sonoma County, we can no longer just relate to the oaks as beautiful scenery but hopefully our relationship to the land will become just a little more intimate, a little more at home. 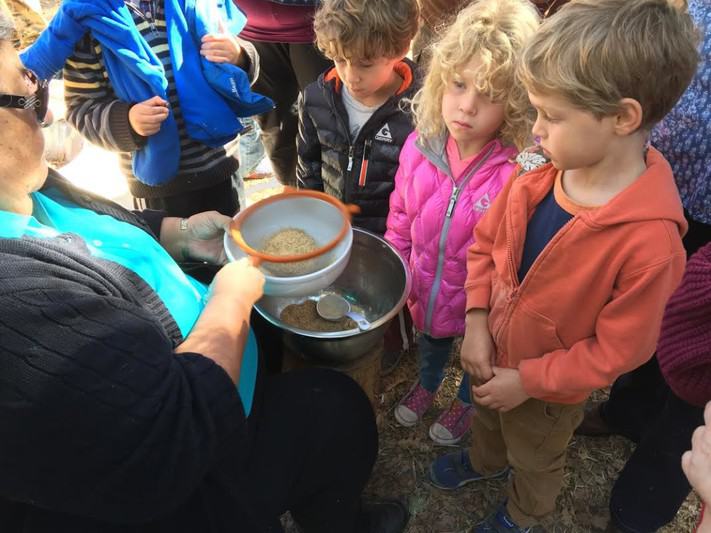 Being in Israel this Week
Right Now, It’s Like That