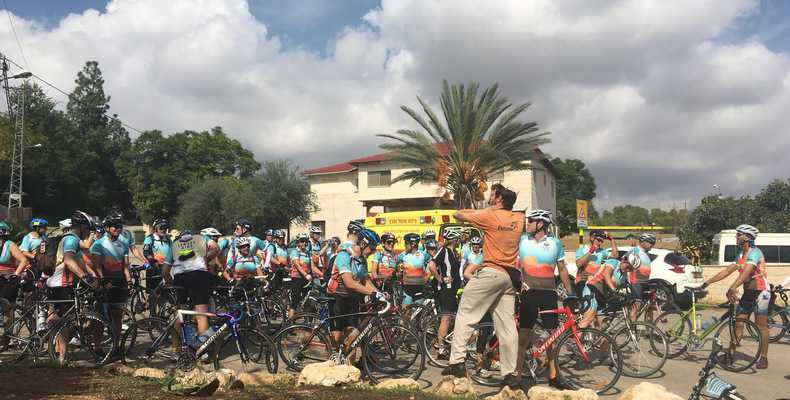 By Nigel Savage on November 2, 2015 in Newsletters, Nigel

I’m tired but feeling good. We rode today from Jerusalem to Ashkelon – 162 riders, on the first day of our 2015 Arava Institute Hazon Israel Ride. It was a good start.

We took precautions against both rain and terrorism. As of the time of writing – Wednesday afternoon in Ashkelon – it’s happily been a quiet day on both fronts.

A couple of reflections on the last week:

I was thinking about the famous line in Mishnah Sanhedrin: anyone who saves a life, it is as if he saves an entire world. It’s preceded by the slightly less famous bit: one who takes someone’s soul; this is like destroying an entire world.

In this most recent period that amplification of human power – taking one life, destroying a world – has played out not only the sense in which the Talmud intended (that each life has infinite significance) but also in the broader sense, that one or two individual acts of destruction can do existential damage on a far far larger stage. It is sad and tragic that there are young Palestinians so full of hate and despair that they would risk their lives – in most cases knowingly sacrifice their own life – for the chance to kill Jewish Israelis. The wave of attacks since the Henkins were murdered at the start of this month is in one sense relatively small, though each attack is one too many, and each victim one victim too many. But Israeli Jews have been understandably unsettled. (They also adapt fairly quickly to what a friend of mine described as the new normal. A video went around with instructions on what to do if you are stabbed [apply pressure to the site of the wound; don’t remove the knife], or if you you come upon someone who’s been stabbed [call for an ambulance; don’t remove the knife].)

But the fear and impact is is not just on Israeli Jews. Israeli Palestinians understand that each one of them may now be seen as a potential attacker. Earlier in the week I ordered a taxi on Gett. When you order it you see how many times the driver has driven (1,890 in this case), his rating (nearly 5 out of 5), and his name (an Arab name). He was an Israeli Palestinian from Jaffa, and as he drove me in to Jerusalem he told me that that morning alone he’d had two people order a car – and then cancel it, when they saw his name.

Meanwhile on Sunday I did an Encounter trip to the Bethlehem area (ie in Yehuda v’Shomron, aka the West Bank, aka the occupied territories, aka Palestine). At one point we needed to do a U–turn by driving out of Area C through an Israeli checkpoint, turning and coming back through on the other side. Sayeed, our Palestinian translater, didn’t have a permit to go through the checkpoint, so he perfectly happily got out of the bus to walk across 8 lines of (barely moving) traffic, for us to pick him up on the other side. It was starting to rain and someone asked him if he had an umbrella. “No,” he said, “I don’t have an umbrella because I don’t want an Israeli to think it might be a weapon…”

Three people, two resolutions and the power of shmita as an intellectual frame.

The obverse of the damage done by a small number of people is the power that each of us has to do good – especially if our ideas make sense and we are determined. I want to give a huge shout-out to the remarkable David Krantz, ably supported by the equally impressive Evonne Marzouk and Rabbi Fred Scherlinder Dobb, for a significant victory at the World Zionist Congress gathering in Jerusalem last week. They successfully pushed two votes through the WZC: the first uses the framework of shmita to mandate environmental planning and carbon mitigation, and the second bans fossil-fuel extraction on Israeli land where shale deposits have been found – including land that we cycled on today. You can read about their accomplishment in this story in the Jerusalem Post, and you can read the actual two resolutions here.

So I hope that things calm down. I’m grateful to all our riders for being here, grateful to our crew (Jewish, Muslim and Christian) for supporting us so ably; and I hope that people will continue to visit and to engage. Thank you to everyone who has sponsored one of our riders. (A majority of the proceeds gotes to the Arava Institute for Environmental Studies, which we cycle to on Sunday.) And, most of all, I hope that we use our infinite power for good and not for ill.