By Sara Linden, Hakhel Fellow of Urban Kibbutz-San Francisco and Associate Director of Admissions at Jewish Community High School of the Bay 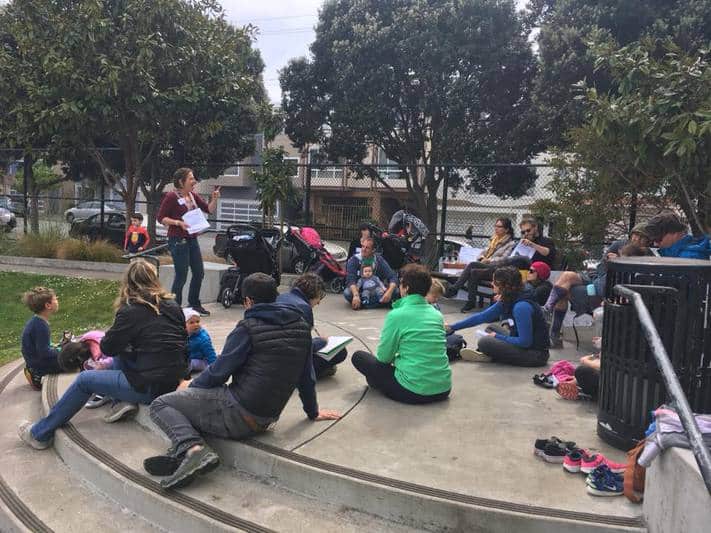 Is this what if felt like to emigrate to Israel in the 1940s? Ready to build community with like-minded strangers who speak different languages, arriving at a new destination, and probably a little discombobulated from a well-worn journey (trains, planes, automobile style). Fast forward, June 2018, we are a pluralistic bunch of Jewish community inspired zealots arriving from 10 different countries to our weekend sanctuary, Camp Pearlstone Retreat Center, for Hazon’s 5th Annual Jewish Intentional Community Conference all doing our best to communicate in one language “Hebr-ish” (English with a side of Hebrew-based fervor).

About 150 participants in total are here. Of the group, half of us are representing two new cohorts: The Israeli Ministry of Diaspora Affairs in partnership with Hazon is sponsoring the Hakel JIC (Jewish Intentional Communities Incubator) program, an initiative convening leaders from newly forming intentional communities across the Diaspora, and Makom is the umbrella organization connecting the leaders of the Kibbutz 2.0 Movement, known as mission-driven intentional communities in Israel.

Since I’m in the Hakhel program I will do my best to explain their goals through our vision of Urban Kibbutz – San Francisco. Their goals of the weekend were for networking, skill-building, and sharing lessons learned. I came out of this retreat learning that one type of intentional community is co-housing, and there are over 150 co-housing collectives in the US, and within those, there is a trend showing that on average each secular “village” is made up of 25% Jewishly identified residents. A product of the 20th-century kibbutz movement was a strengthened Jewish peoplehood. What would it look like if we mixed this existing model of co-housing around Jewish values? Our hypothesis is that a pluralistic, multi-generational, Jewish co-housing collective in the Bay Area that married Jewish traditions with the day-to-day will strengthen our Jewish-American identity, provide a model and solution for some of the “unidentified” jews, and leave a smaller carbon footprint for our grandchildren – in addition to reducing the monthly expenses of those living within. And without a doubt place a spotlight back onto the roots that originally founded this Jewish community during the 1850s Gold Rush that has been steeped in entrepreneurship and innovation since. Stay tuned for more updates on this human-centered, design-based project in future months. Let’s strengthen our Jewish life and learning together by infusing Jewish values and tradition into our residential lifestyles and set up a blueprint for those looking for new apps to provide more connection, meaning and purpose in the Jewish iOS so that we may become more flourishing human beings.

The Overstory: A First-Ever Hazon Book Club!
Issues with Emails from hazon.org