So: the period of teshuva begins.

With it I invite you to read The Overstory by Richard Powers. (Buy it from the Hazon Store by August 31 for 20% off with code Overstory.)

I can’t say that it is the best book I’ve ever read, but I can’t think of another book that is better. It is rich, complicated, creative, intricate. Hard and tragic. Thought-provoking, and then some. It is as beautifully written as anything you’ll ever read.

If you possibly can, don’t read anything about it. Don’t read a review. Don’t read the blurb on the book itself. At most you can read the table of contents, and wonder a little about that, and then turn to page 1. (After you finish the book you can – as I did – read the magisterial review by Barbara Kingsolver that was on the front page of The New York Times book review section.)

It is a book that reads at a very unusual pace indeed.

The opening chapters, the whole first section, the first third of the book, I read glacially slowly – so slowly, in fact, that I read two other books, start to finish, in the time that I read them. This is not like me at all. But each chapter was so beautifully formed, so fully complete in itself, that I felt I couldn’t just turn to the next page – I had to digest it a little. I couldn’t just move on to some new character and new story.

Then the next section, the middle section, I read in a different way – I had to go back and keep re-reading earlier sections, to remind myself who was who and put some of the pieces together. And this was not a distraction, it was entirely pleasurable, like reconnecting with old and dear friends.

And then the last section I read gatheringly fast, lost in the book, more in the world of the book than in whatever is or was going on around me. I knew at a certain point, before the book was through, that I was going to write this email to the Hazon list, and I wasn’t sure if I’d be anywhere near finished when I wrote this, and for two hundred or more pages I was saying to myself, I hope he can land this. I really hope he can land this… And – well – I finished the book, and you’ll decide for yourself if you think he landed it or not.

You can read it on a Kindle if that’s how you like to read, and if you do it may have the advantage of letting you look up words as you read. I read it in hardcover, with a pencil. In the back I filled two pages with lists of words to look up – achenes, sintering, scry, piezo, moksha, marcescent, racemes, logy, pleach, drumlins, saprophytic, petioles, celadon, lote, espaliered, pareidolia, adelgids…

Fifteen years ago, in an interview in The Guardian, Richard Powers said “A book is you, in silence, hearing voices in your head, unfolding at a time that has nothing to do with the timescale of reading. And for the hours that we retreat into this moratorium, with the last form of private and silent human activity that isn’t considered pathological, we are outside of time.”

As we enter this new period of time in the Jewish calendar, there is no better book to read than this one – from now through Rosh Hashanah and Yom Kippur and Sukkot, and on into the fall and the fall foliage and the rains and the whole new year beginning.

At some point I’ll schedule a Zoom call for anyone who wants to discuss it. I’ll schedule this for some time later in September, so there’ll be enough time for you to read it. But it’s the kind of book we can discuss even if you haven’t finished it. You don’t have to read The Overstory quickly, until the book itself won’t let you read it slowly.

So: The Overstory. Richard Powers. 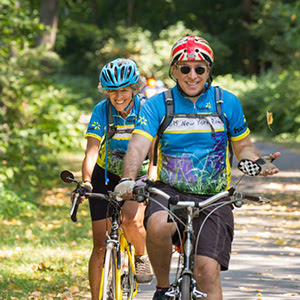 Nigel and Ruth Messinger on the 2015 NY Ride

And then, more parochially – though it connects, at least indirectly – please join me for Hazon’s New York Ride & Retreat, this Labor Day weekend.

This has been a crazy crazy summer. It hit 90 degrees in the Arctic. The climate refugees who were predicted by the EU fifteen years ago – those are the refugees that the western world is trying to cope with, today. The rate and range of things going wrong are alarming, scary, disempowering.

Please do something about this!

As an organization we’re helping to spur change across the Jewish community.

If you’re free this coming Labor Day weekend, then please join me for Hazon’s New York Ride. It’s a Shabbat retreat and then a stunning two-day bike ride. And it’s an opportunity for you to make a difference – get on your bike, and sponsor yourself, and then write to your friends and family members and say, this is what I’m doing – please sponsor me – and please take your own decision to start to make a difference.

If you’ve been on our list for a few years and always thought one day I should do that ride… this year is that year. We still have a few slots left, and also very few Shabbat-only slots.

And if you can’t make it, please consider sponsoring me or another rider. It’s easy – just click here.

If you have questions email me, or Miriam Leichtling at miriam@hazon.org.

And – finally – in this season of teshuva, about to begin: 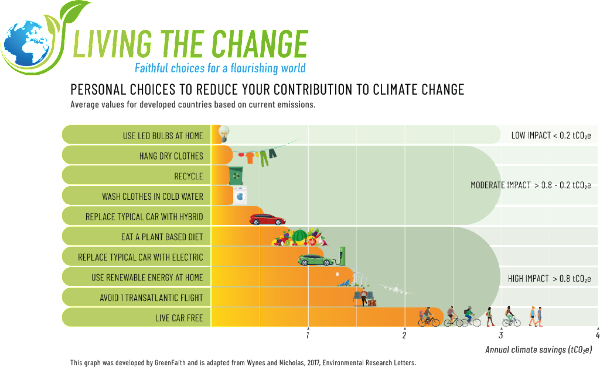