By Nigel Savage on November 24, 2014 in Newsletters, Nigel

The teaching that is speaking to me most deeply, these days, is the one about the two pockets – that we each should walk around with two pieces of paper in our pockets. 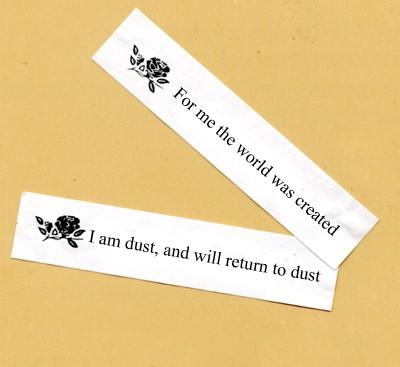 In one pocket: “for me the world was created”
And in the other: “I am dust, and will return to dust…”

From one pocket: our great-grandparents could hardly dream of the peace, freedom, affluence, and choice that so many of us take for granted each day. They couldn’t have imagined the medicines that heal us or the technologies that enable us to learn or to stay connected. They didn’t expect to see three Jews on the US Supreme Court, or Ivy League schools that are a quarter Jewish, or a State of Israel that is prosperous, diverse, culturally vibrant, and militarily strong.

Yet those of us who are able to take these things for granted didn’t necessarily expect some of the things in the other pocket. Political systems moving too slowly to respond to clear evidence of potentially irreversible damage to the world in which we live. Anarchy and violence across swathes of the Middle East. Hundreds of schoolgirls kidnapped in Africa, still missing a year later. Jews threatened in public space in Paris and London. And four saintly Jewish men in a synagogue, wearing tallis and tefillin, reciting the shma – hacked to death.

With these rather somber sentiments I thus welcome you to the start of our end-of-year Appeal, which we’ve christened Hazonathon 2014. Because Hazon ends this year, and moves into the next year, with such a profound awareness of these two truths.

In one pocket: a remarkable year, the most impactful in our history. We published the JOFEE Report, and thus added a vital new concept – and new acronym – to American Jewish life. We published our first book, and helped take shmita off the shelf and back into profound contemporary engagement. Behind the scenes we completed our merger, integrated a new database, hired a new (and brilliant) director for Teva, launched an office in San Diego, and delivered close to 27,000 person-days of immersive experiences. We produced our first-ever Rabbis’ Retreat, and and I’m writing from our second Jewish Intentional Communities Conference – what feels like a new and vital front-edge of Jewish life. Siach is growing and flourishing. Adamah is an ongoing miracle, helping to sprout vegetables today and extraordinary leaders the day after. The Jewish Food Festivals that we started to pilot a couple of years ago in Colorado are now spreading and grounding – the headline, earlier this week, in Philadelphia’s Jewish Exponent, summed up the incredible Food Festival I attended last Sunday: “Walloped With Inspiration at Hazon Food Festival.” In the last month more than 190 people have returned to the US from Israel – participants and staff on our Israel Sustainable Food Tour and our AIES Hazon Israel Ride. All this, and much much more, is why we come to work each day, and why our volunteers give so generously of their time and their money: because we are making a difference, in all kinds of ways, and it has never been more needed than it is today.

But in the other pocket: the profound shift in asset allocation which is needed in American Jewish life is happening far too slowly. In consequence, even as we have grown in scale and impact fourteen years running, we still scramble to balance our budget; our staff (incredibly idealistic and hard-working) are somewhat over-stretched; we have no reserves or endowment; and we turn young people away from attending some of our retreats because we don’t have sufficient scholarship funding to pay for them. Isabella Freedman is home to a truly extraordinary collection of people, and it hosts retreats, each week, that touch people’s lives sometimes for decades hence. Yet it is also – as you see when you visit – old and a little rundown. We need to fix up a bunch of buildings, replace some others. We need donors for that, too.

Many of you, reading this, have already supported us this year. Some have supported us directly; some have sponsored a rider; many of you have attended retreats at Freedman, or gone to one of our programs elsewhere, or used our educational resources, or sent your kids to Teva. To each and all of you, huge thanks.

And I trust that, in reading this, whether you have given already or not, you may feel able to give a gift, now, further to support this vital work. Please consider giving a significant gift to Hazon. If you have given a gift earlier in the year, but feel able to give a second gift: please do so. If you have given a gift, but would like to become a monthly sustainer – the rock upon which our work rests – please, please do so. If you want to talk with David Weisberg or me about a larger or targeted gift – please be in touch. The good news is that people are really starting to step forwards. A growing number of people have seen this organization grow and flourish and they – you – are starting to understand us. We cannot fix all the problems in the world, in Israel, in America, or in the Jewish community. But we are making a dent. Our name is not inappropriate: we do what we do with a sense of hope and possibility, with vision and esprit de corps, with the determination both to effect systemic change and to touch people’s lives one by one. If you would like to make a significant year-end gift to Hazon, please click here, and please give your gift today, in honor of Thanksgiving, and Chanukah, and to create a better world for all.

And I want to end this appeal in a particularly curious way – by asking you not only to support Hazon, but also to support UJA-Federation of New York, or your local federation. Liz and I increased our own gift to UJA-Federation of New York this year. The fact that they are incredibly significant supporters of Hazon is, truthfully, the least of it. The more time that I spend at UJA, the more astonished I am by the range of the good that they do, the thoughtfulness with which they do it, and the professionalism and idealism of their staff and their lay leaders. They are moving forwards in forceful and important ways, and this year – for the first time, to my knowledge – they have set a goal of increasing the number of donors by 5%. That is hugely significant because it is an explicit statement, on their part, that they want to reach new donors, younger donors, smaller donors; people who don’t think of themselves as “federation people.” Especially if you’re in that camp, I invite you to make a first-time donation to UJA-Federation of New York; or to check out their website. If you want to ask David or me why we feel so strongly about this – or indeed you have any questions, either about Hazon or about UJA-Federation of New York – please be in touch.

I do not think it weird or inappropriate to ask you to support both Hazon and Federation. Each night we light another candle. Each day we have other blessings for which to be grateful. Love grows when we freely give it. I do not believe it will diminish you to support Hazon and Federation; I believe – certainly I hope – rather that at a time of darkness you will derive genuine existential satisfaction in feeling that you are bringing light to the world. It is true that we should remember both pockets; but right now I do not think we need further reminding of the darkness; I think we need to rededicate ourselves to our significance, to a sense of possibility, and to a real determination to do good in the world.

This weekend it’s Rosh Chodesh Kislev; then on Thursday it’s Thanksgiving. In shul we start to read the story of Yaakov and Esav – Jacob and Esau. It is the story of striving, struggling, and fraternal rivalry. But it is the beginning, also, of Yaakov’s existential journey. It culminates in him becoming Israel: learning new skills; changing his habits; becoming wiser; reconciling with his sibling. So may this be a time of gratitude and of light. May we do good and be good. May we learn and grow and flourish. And may we live in peace and in freedom.

The Earth Belongs to Whom?
Post-Ride Reflections from Rabbi Steve Golden: Riding in Memory of a Friend