I dedicated my ride on the 2014 Israel Ride to the memory of Sol Yousha. Sol grew up in the Turkish Jewish community of New Lots/Canarsie that eventually founded our congregation, the Sephardic Temple of Cedarhurst. 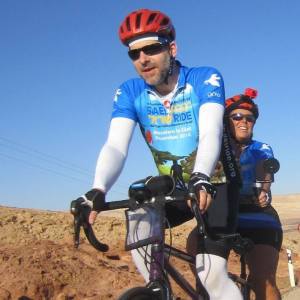 Steve and Shira Golden
on the 2014 Israel Ride

While pedaling over 275 miles from Jerusalem to Eilat, I had occasion to think about Sol and his brief but valiant fight against cancer that took his life just weeks ago on the first day of Sukkot. And I also thought about my beloved father-in-law, Cantor Hyman Sky, whose memory was commemorated by Shira with her participation in this year’s ride.

We all have a journey in life, though often the route is not clear to us. Most of us have certain goals and destinations for our efforts, and happily, most of us experience many joys and thrills along the way.

Yet, there are some paths that get cut short, or take strange detours.

One of the things that I really wanted to do with the little bit of extra time that we allowed ourselves by arriving in Israel a day early before the ride started, was to visit Yad Vashem.  The only time I had visited the museum was many decades ago when my family took a summer trip after I became bar mitzvah.

Since the museum had been renewed and upgraded in 2005, I wanted to make sure to go there even if I didn’t do any other tourist activity. I knew that I would come back from our trip just in time to preach on Parashat Hayye Sarah, and believed that I would find a connection to this week’s Torah portion.

It was impressive, although both the Holocaust Museum in Washington and even the one in our own New York City do a very good job in comparison. 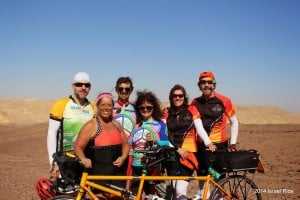 Steve and Shira, with the 2 other
tandem bike pairs on the 2014 Israel Ride

Yet the one artifact that struck home most viscerally was the display of a pair of shoe inserts made from a Sefer Torah. The Nazis had looted hundreds of Torah scrolls and deemed the parchment useful for a number of industries. In this case, many reams of parchment were made available to German shoe manufacturers.  When I looked closely at the pair of inserts on display I was amazed to find that particular pair were cut from chapter 12 of Exodus which describes the exodus from slavery in Egypt. I could not imagine a more grim dissonance.

Just think – the story of the redemption from Egypt told in maybe 4 different ways in that chapter – and here, that foundational pillar of Israelite and Jewish memory of our creation as a people bound to G-d and the Torah mission – that sacred record of G-d’s deliverance from bondage and cruel oppression – was being used in an obscenely mundane and crude context – a cushion for someone’s foot as they walked about their daily life.

So when I reflected on Sol Yousha and the paradox of the-Torah-scroll-become-shoe-insert, a message presented itself to me.

As I said, there are some paths that get cut short, or take strange detours.  According to a close reading of the biblical text, Abraham and Sarah, whose life stories are brought to an end in the Torah reading, were not the originators of the idea to journey to the land of Canaan. Terah, the father of Abraham, was the person who had the revolutionary idea to leave Ur of the Chaldeans and move to Canaan.

Terah, took his son Abraham and his grandson Lot and his daughter-in-law Sarah, and moved them towards the land of Israel. They got as far as the city of Haran. Why Terah didn’t reach his goal of moving to Canaan, we are not told.  Only that he settled in Haran and died there.

But Terah’s mission was to take his family and move to Israel.

You see, many times in life we don’t see the realization of our dreams, but oftentimes, by our careful and hard work, we impress our mission and goals on others who pick up where we have fallen off, and they carry forward to complete the journey. 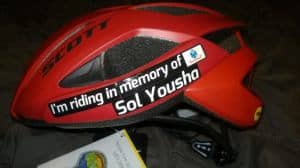 Sol would have been on that bike ride with me and Shira; Sol registered for the ride this past spring and would have likely joined our little ‘Pedaling 50’ team.  But he wasn’t given the opportunity. Instead, a man who loved Israel and loved exploring the land and its people, this man’s goal of participating in an Israel Bike Ride which raises crucial funds for coexistence programming between Jews, Muslims and Christians, Israelis, Palestinians, Jordanians and North Americans, a Bike Ride which raises money to support environmental studies in a land that has critical challenges to its water resources – Sol’s goal to ride a bicycle 350 miles from Jerusalem to Eilat would be symbolically achieved by me.  And most likely that dream will be met by Sol’s family members who are registering for the 2015 event to also ride in his memory.

So there is sadness that one doesn’t get to see our plans to fruition. We all like to make it to the finish line that we set for our projects.

Yes, there were monsters that desecrated G-d’s word, took a story of hope and redemption and literally ground it into the dirt. But with G-d’s mercy, the mission of Torah did not die. It survived the horrors of the Holocaust, and the message of the Exodus still brings fresh hope and sustenance to myriads of human beings around the globe who live with crushing oppression.

Indeed, some paths get cut short, or take strange detours.

But the knowledge that others can, and will pick up where we leave off, and continue the mission – that is a powerful awareness of the hand of G-d at work in our lives. We are animated by forces beyond our control, chance occurrences that are included in the design of G-d’s plan which we cannot ultimately fathom. Yet sometimes we do see that our family, our friends, our students, our community – there are some that pick up where we leave off and they reach the ‘Promised Land’. And that hopeful message should give us strength.

As the sage Ribbi Tarfon taught: “Lo alekha ha-melakhah ligmor, ve-lo atta ben horin libatel mimena.” ‘It’s not always up to us to finish the task; nevertheless, we are obligated to give it the best shot we have’.

Two Pockets
Giving Thanks, and a Very Different Kind of Recycling