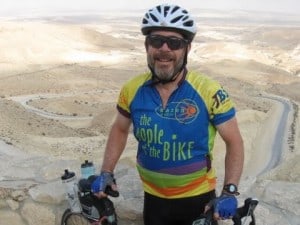 Lester Blumberg, a participant in the 2010 Arava Institute Hazon Israel Ride, recently reflected on his experience in a post on his blog. While so many of his cohort were there for a repeat trip, often for a 3rd, 4th, and 5th time, he was certain 2011 would be too soon to return.  He loved his trip in 2010, which he thought was a one-time event.

As readers of my ride blog know, it was stunning.  The sun, the sand… the Land.

I did not come back right away.  2011 was too soon to think about it.  But in the fall, when I started to get fundraising letters from friends, and email pitches from Hazon, something started… somewhere deep in my riding soul… first it was just nostalgia, then it became an idea, then a yearning… and soon it became a plan.  I’m going back!

I was not all that excited about the initial discussions from Hazon and Arava about riding just in the North.  I wrote and urged at least a split.  As beautiful as the north is, nothing can match riding in the desert, and we have to see the Arava Institute at Ketura; after all, what are we riding for???  And as long as we are at Ketura, might as well go to Eilat.  I may not have been the vote that convinced the planners to do this – but split it will be –

2012 – Israel from Top to Bottom! October 30 – November 6, The Hula Valley, the Golan, Beit Shan, the Kinneret; Shabbat in Mitzpe Ramon, then on to Ketura and Eilat.

This will be awesome!

Curious what all the fuss is about? Learn more about the Arava Institute Hazon Israel Ride, October 31st – November 6th and register today! See what’s new about this year’s route. Scholarships are available for people who have not been to Israel in five years (or ever).