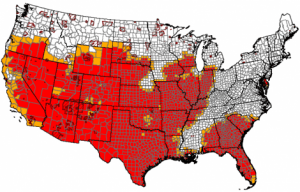 For many years now, scientists have been predicting that man-made global warming would have devastating impacts on droughts and dust storms in the Southwest and around the world because of the combined effects of warming, drying and the melting of snow and ice. And this summer alone we’ve experienced the brutal effects of  climate change, which fuels extreme weather.

Here are some (not so fun) facts on recent extreme weather and climate change:

And no surprise here- our food systems are contributing to the problem. Currently food products in America travel an average of 1,500 from point of production to the consumer.  Transporting foods these great distances, using trucks, trains, ships and planes, contributes significantly to America’s carbon footprint, and in turn to global warming.  Transporting foods long distances requires that they be gassed, injected, or chemically preserved to maintain the appearance of freshness.

So after reading all that bad news, the question is, what’s the solution? The only response to these horrific climate changes is to reduce carbon pollution, and yes there are ways to do just that, and you can be part of the solution!

By joining the Hazon New York Ride, you are riding in support of sustainable food systems and reducing your carbon footprint one bike at a time. Making your bike a part of your transportation arsenal is a catalyst for change and registering for the New York Ride, training, and riding that weekend is a great first step. And all ride proceeds go to promoting Hazon’s efforts to create healthier and more sustainable communities, with 60-70% of funds raised go to Hazon’s year round food programs, 10-15% of funds being awarded as grants to external organization and programs that share Hazon’s missions, and 20-25% going to cover the costs of the ride itself.