I’m no farmer. The amount of produce harvested from everything I’ve ever planted would surely not top ten pounds. The impact of adapting the agricultural principles of shmita to my life in Northampton would be fairly insignificant. But like all educators, I have planted scores of metaphorical seeds. Of all those seeds, nothing has produced as bountiful a harvest as those that were planted at Isabella Freedman in the Fall of 1994, the very first season of Teva.

A quick summary, before I wax metaphorical. In 1993, after two years of teaching at Nature’s Classroom, I sat in my mother’s office and wrote a letter describing my dream of a residential environmental-education program for Jewish day schools. I made a few dozen copies and mailed them to every winterized, kosher camping facility within three hours of NYC. (Ah, the hubris of youth!) Eric Robbins, then director of Isabella Freedman, called me into his office. “I love the idea,” he said. “Let’s give it a try.” 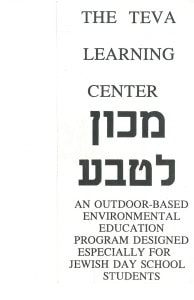 I created a “brochure”, which was inadvertently printed with the back cover on the inside, and a mailing, which I hand-addressed to almost every Jewish Day school in the Northeast. We received exactly one phone call. A group of Solomon Schechter schools from NJ were looking for a new environmental-education center and they loved our idea. They agreed to be our guinea pigs. And thus was born the first season of Teva – which ran for only two weeks.

Which takes me (finally) to the topic of shmita. One of the great lessons of the shmita year is that those things which we most strongly identify as our creations, we do not actually own. Traditionally, this refers food we grow, the land we live on and develop, and any wealth we may have amassed. But this lesson is equally applicable to our labors of love.

I only worked as the program director of Teva for the first season. After planting those seeds, I watched as the program grew in ways I never could have accomplished or even imagined. But even though it was my choice to leave, it was not always easy to navigate my relationship with Teva after my departure. Did I “own” this program in some way? Why wasn’t anyone calling to solicit my advice? To ask me to consult? Or even invite me to visit?

Just as many of us would never turn off our computers or take time for a family meal were it not for the mandate of Shabbat, many of us do not know how to let go of our investments, whether they are agricultural, monetary, physical, or metaphorical. Without a structured or mandated release, it took me a long time to “let go” on my own – to stop feeling just the tiniest bit conflicted about Teva’s growth and success without me. Had I approached Teva with a shmita mindset, I know it would have been an easier and speedier process.

Fortunately, 21 years later, I have long since shed any notions of ownership that strained my relationship with Teva, thanks in no small part to Nili Simhai’s generous overtures during her years as director. And last month, for the first time since starting the program, I returned to visit during a programming week. I came because my daughter Ella was attending Shomrei Adamah with her class at Lander-Grinspoon Academy. If any conflicted feelings remained (and I’m pretty sure they didn’t) they were immediately replaced by the joy of seeing my child reaping the harvest of the tiny seeds I had planted – a harvest that is bountiful, diverse and just a little bit magical. Teva, as well as the programs it’s helped inspire, are clearly the product of every instructor and every director who has been part of the staff. We planted, we plowed, we pruned and harvested. And when we needed a rest (and OH did we need a rest), we released, making room for new generation to do the same. True, it’s not a Biblical shmita, but it is a reminder that we create so much more by letting go than we do by holding on.

Amy Meltzer teaches Kindergarten at Lander Grinspoon Academy in Nothampton, where she lives with her husband, Keith, her daughters, Ella and Zoe, and their golden retriever Willie Nelson Mandela. She is the author of two children’s books, A Mezuzah on the Door and The Shabbat Princess, as well as the blog Homeshuling. She has worked at Nature’s Classroom, North Carolina Outward Bound, Penn Hillel, Beit Rabban, and numerous synagogues, but is especially proud of her role in founding  Teva. She is fervently hoping the nickname “Bubbe Teva” will catch on soon.

Become An Energy Maccabee
Can we claim the truths of seemingly non-overlapping stories?