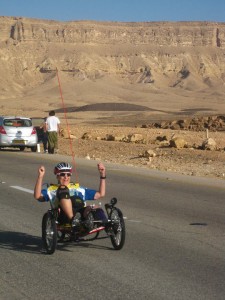 While most of the riders had two wheels under them, one very special cyclist had three. Kristi Wivagg completed the 2010 Israel Ride on her recumbent trike. You could tell Kristi was coming from a mile away, not only because of her super-bike, but also her beaming smile–especially after descending into Makhtesh Ramon at 42 mph! At Kibbutz Ketura, after our fourth day of riding, I sat down with Kristi to talk about her motivation for coming on the Ride and more.

Tell us about yourself.

I’m coming from Boston. I have a husband, a 23 year old daughter, Sara, and a 16 year old son, Jesse. During the school year I’m a teacher at LaSalle College teaching writing and speech and drama, but of course not this fall.

I direct musical theater at Camp Yavneh every summer. I have always wanted to do the Israel Ride and didn’t think that I had the stamina for it or was athletic enough. Six years ago I was diagnosed with bone cancer and was basically told after I had surgery they couldn’t guarantee I could walk againâ€”that I would be in a wheelchair, maybe a walker. I told them no, made a pledge that I would do this ride, somehow I would find a way. I’m doing the ride in honor of my dad and my friend Danny and my best friend Wendy, who all died from cancer.

How did you hear about Hazon/the Israel Ride?

I work at Camp Yavneh in the summertime and a number of my friends have done it. I’ve always wanted to do it, and now I’m here!

Nuts and dried fruit-we get a lot on the Israel Ride, and they are so good!

Tell us about riding a recumbent trike.

It’s fabulous going downhill; it feels rock solid and wonderful. Going uphill is another story. Especially with the muscles I’m still training and getting to work, it’s really difficult. But thanks to Danny, who’s ridden up behind me, I feel like a big big rider.

You talk about “paying it forward.” What does that mean?

Another reason I’m doing this ride is because I love what Arava and Hazon are doing. I am starting my own foundation for bone cancer, which actually occurs most often in 20-somethings. My case was unusual in that sense. When health insurance runs out you’re done, and it took a lot a lot of money and hard work and training and a lot of training the right people. So, the idea is that I want to take two people and I want to help them get to the point where they’re able to start giving back to other people like I am. Then, they will be required to do something like the Israel Ride, and they will take two people. This is the idea of paying it forward.

Another rider lovingly commented that “the coolest thing is that Kristi looks like a robot” when she’s riding her special speedster. A robot with a huge smile and a great attitude, for sure. For more on Kristi and her work check out The Kristi Project.

Learn more about about the Arava Institute Hazon Israel Ride.

From Roosevelt Islander: Doctor Jack Resnick on the Ride
Stretching Before Your Ride