This week’s Torah portion, Ki Tisa, tells the story of Moses receiving the Ten Commandments from G-d (not once but twice) at Mount Sinai. The first set of Ten Commandments is broken when Moses destroys them in frustration when he witnesses the Egyptians worshiping a god they created because they were impatient waiting for his return from Mount Sinai. Eventually, Moses returns to Mount Sinai and G-d scribes the same words on a new set of stones. After speaking with G-d, when Moses descends Mount Sinai the second time his face is radiating. While this Torah portion contains many significant moments, the part that most resonated with me wast he conversation between G-d and Moses before he leaves Mount Sinai the first time: “Six days shall work be done, but the seventh day is a Sabbath of solemn rest, holy to the Lord. This shall be a perpetual covenant, a sign between Me and the children of Israel forever…” In this well-known quote, we come to understand that we rest on Shabbat because G-d commands it.

Reading this Torah portion reminded me of the other Mitzvot that we adhere to. While a Mitzvah is commonly thought of as charity or a good deed, it is actually a commandment from G-d. Mitzvah, when translated from hebrew to English, means commandment. There are 613 Mitzvot (plural of Mitzvah) that are derived from the Torah. These Mitzvot are not good deeds, but rather they are divine guidelines on how to be good.

One Mitzvot that I encounter often in my role as a JOFEE Fellow at the Peninsula Jewish Community Center (PJCC) is that of tzedakah. Although tzedakah is often considered ‘charity’, it translates to justice or righteousness. Every other month, I work with a team of dedicated individuals to create a program for our Garden Service Day, an event that teaches Jewish values through hands-on service projects. Past service projects include working in the Justice Garden at the PJCC (where all of the produce is donated to a local shelter), creating pet beds and toys for an animal shelter, preparing homemade dinners for a local shelter, and making cards and craft kits fro hospitalized children. Each Garden Service Day begins with a Jewish lesson that connects the work we will be doing with Jewish values, such as tzedakah. 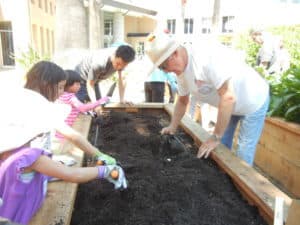 For our most recent service day, in honor of Purim we created michloach manot (gift baskets) with homemade hamantaschen for Jewish seniors. Nancy Wolfson (www.youarebecauseyoueat.com) traveled from New York to lead a beautiful hamantaschen baking experience, interweaving Jewish wisdom with food education. The finished products were a representation of the participants’ ability to come together to give back to their community. 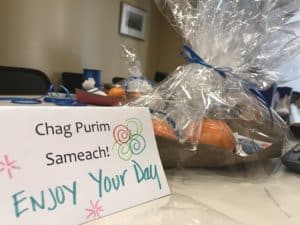 Through our Garden Service Days we hope to inspire individuals to truly understand the meaning of tzedakah, to consider their actions not as a mere act of charity by as a part of a larger justice movement. It is not about doing a good deed, but about doing your part to create a fair world. Similarly as to how we are commanded to observe Shabbat, we also must allot time (or in some cases money) to perform acts of tzedakah for the world. These mitzvot help us lead a life that is respected and virtuous.

Nicole Crus is the Youth & Family Programs Manager at the Peninsula Jewish Community Center (PJCC) in the Bay Area. Nicole is thrilled to be part of the first JOFEE cohort and share her JOFEE knowledge to the youth and families at the PJCC.