By Nigel Savage on February 29, 2012 in Newsletters 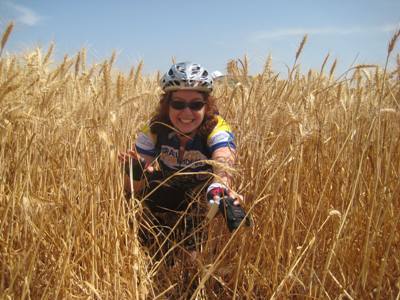 You may or may not have visited a farm, but have you ever biked to one? Just traveling by bike allows us to fully participate in the process of getting from one place to another (making it all the more amazing that our bodies, and these machines, do what they do), visiting a farm reveals the all-to-often hidden mysteries of how food is producedâ€”provoking even more questions about plants, soil, and the interconnections between our bodies and the earth

This year, participants in all Hazon rides will be able to use their own pedal-power to visit farms large and smallâ€”from the brand new Kibbutz Yarok at Camp Newman (California Ride) to the one-acre Pushing the Envelope Farm in Geneva, IL (Cross-USA Ride), to the Adamah Farm at Isabella Freedman (New York Ride), and to Kibbutz Ketura (Israel Ride). Read more about What’s Sprouting at Kibbutz Yarok…

By Persephone Rivka and Sophie Vener

In permaculture, Bill Mollison advises all gardeners and farmers to live in a tent on their land for a year before they start their design for one reason: observation. When immersed in a place, one can best observe important elements such as the amount of rainfall, where the water flows, the minimum and maximum temperatures, how the plants, animals, and humans interact on the site, the wind direction, sun-path and shading, micro-climates and the general topography, the resources on hand, the skills and knowledge of the people present, the physical and fiscal boundaries, and the history of the land.

Continue Reading “Something is Sprouding at Kibbutz Yarok…”

Pikkuah Nefesh in the Wilderness – Saving a Life 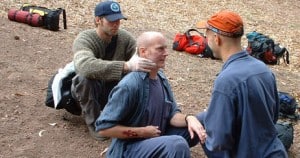 In the summer of 1983, in the Siskiyou National Forest in Northern California, I was leading 15 teenagers on a three day backpacking trip as part of a teen travel program out of Camp Tawonga. After a five mile climb we arrived at our mountain lake destination and were delighted to find snow around much of the lake. Tired and hungry, my co-leader and I guided the teens to set up camp, eat some snacks, and put on jackets. A cold afternoon was promising a very cold night. One girl, thin and lovely, wandered away from camp and went to sit on the snow. I noticed that she didn’t have a jacket on and was aware that in general she hadn’t been eating much on our trip. I didn’t know how long she had been up on the snow drift and walked over to get her to come back and put her jacket on. She was incoherent, slurring her words and not interested in putting on her jacket.

“My God,” I thought, “This is hypothermia, this is what I learned it could look like.” 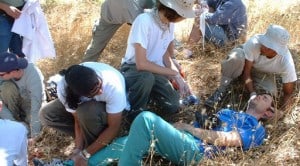 Wilderness First Aid is the specific discipline of first aid which relates to care in remote areas, where emergency medical services will be difficult to obtain or will take a long time to arrive. Hazon is partnering with Foster Calm to offer a WFA class with lots of hands-on skills practice.

Cross-USA Ride: You Don’t Want to Miss This! 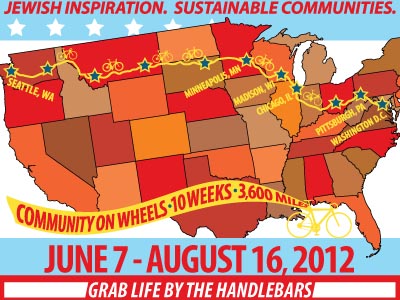 Don’t miss the boatâ€”or the bike! Now is the time to sign up for the Hazon Cross-USA Ride before prices rise for both full country and segment riders. Stop procrastinating and put in your time-off requests!
Wondering what we’ll be doing and seeing on the Ride?

Did you know that Pittsburgh is historically called the Steel City, as its economy was largely based on steel manufacturing? Pittsburgh has gone through a renaissance and now the economy is primarily driven by health care, medicine, technology, robotics, and financial services. Today, the city is focusing on the environment: supporting local-food projects and adding five miles of new bike lanes last year. Keeping up with the trends, the Hillel Jewish University Center of Pittsburgh is undergoing major renovations to green their building, becoming one of the first Hillels in the country to be LEED certified over the next few years.

While in Pittsburgh we will 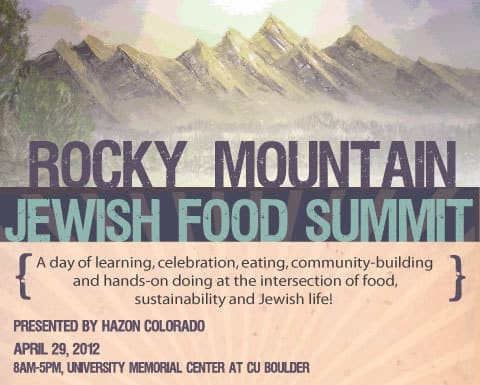 NEW! Meeting the needs of families and children. 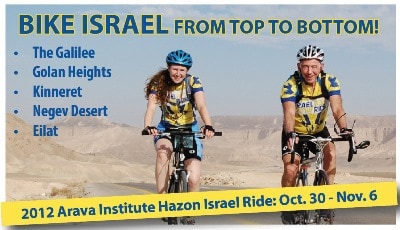 Register for the 2012 Israel Ride

NEW: Scholarships available for riders under 35 and riders who have not been to Israel in the last ten years.

Siach brings together environmental and social justice activists who work on justice projects all around the world for a weekend of conversation to learn from, about, and with each other. Who is part of the conversation?

What conversations will take place this year and how will you be a part of them? Join committed activists like Avi, Kayla, and Aliza this year at Siach and meet other Jews working for social justice from across Israel, North America, and Europe.

Flight and registration subsidies are available.

A Drawer Full of Spandex

My transformation, from purchasing a bike to becoming a more capable rider 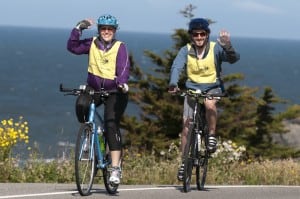 My decision to buy a hybrid bike two years ago was motivated by my desire to drive less and get outside more. I had visions of rolling down the street to get ice cream or cruising a few miles to the beach. “Serious cycling” was not a part of my plan. However, here I am two years later with a drawer full of spandex and other gear to go out on comfortable multi-hour rides. How did I get here? Hazon was my catalyst.

A Walk Among the Trees

Walk in the Presidio with Deborah Newbrun, Hazon’s Bay Area Director, former National Park Service Ranger, and author of Spirit in Nature: Teaching Judaism and Ecology on the Trail. For this special off-site Museum program in conjunction with the Contemporary Jewish Museum exhibition Do Not Destroy: Trees, Art and Jewish Thought, find insight under the canopy of San Francisco’s park trees. Deborah will draw connections between Jewish values and the wonder of nature.

Power of One: Honoring Jewish Women 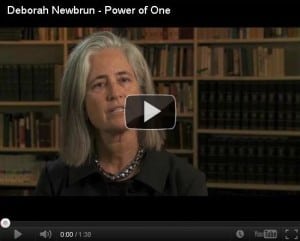 The Power of One, presented by Jewish Community Federation of San Francisco’ s Women’s Philanthropy, is “a celebration of Jewish women who inspire us to make a difference in the world.” Deborah Newbrun, Bay Area Director of Hazon, speaks in this video series featuring Bay Area and Israeli change-makers. She has worked in the Jewish community for almost her entire careerâ€”26 years of which had been running Camp Tawonga. Get to know Deborah and her passions in the video below.

Local Events and Features from our Partners and Friends

Join an intergenerational, pluralistic community of Jewish farmers, rabbis, educators, scholars, and consumers from across the country. 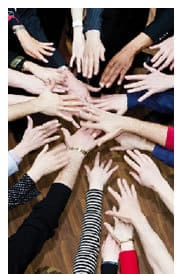 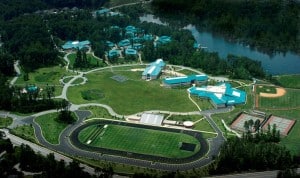 For most athletes “going for the gold” is a personal motivation but at the American Hebrew Academy, students and staff are learning that “going for the green” is equally important. “I know that I can put the catsup and the mustard in the squeezable containers” our mashgiach (kashrut supervisor), Paul, says in his pristine South African accent, as he explains that single use packets of condiments are wasteful… and he is concerned about how the kitchen at the American Hebrew Academy can do its share to stay “green.”

Enter the “Where Do You Give?” National Design Competition

Show us! Enter the Where Do You Give? National Design Competition and design a tzedakah box that will get people to give. Don’t wait! The deadline to enter is March 26, 2012. Enter now by clicking here.

Over 18? Submit it to our main competition here. Adults have the chance of winning a $2500 cash prize and an opportunity to travel internationally! JUST ANNOUNCED: The deadline has been extended to March 9, 2012! 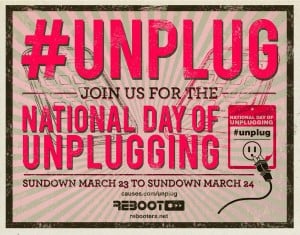 Join Reboot in helping people around the world rejuvenate the ritual of Shabbat by signing on to sign off from technology for the 3rd annual National Day of Unplugging (NDU) on March 23-24, 2012.

This year includes a “Unplug and Eat Together” campaign in partnership with Hazon and Slow Food USA.

Love, Hate and the Jewish State 5.0 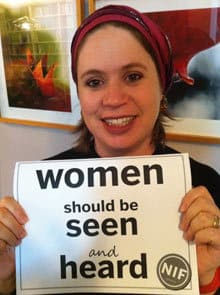 For many of us, gender inequality describes unfair salary disparities, constricting gender norms or under-representation. Join NIF for the fifth in a series of highly interactive, non-persuasive, non-political discussions with a diverse group of people in their 20s and 30s. Followed by a reception.