My first Israel Ride was in the fall of 2008. I had read about the ride, but was never brave enough to sign up for it. And then one evening I met someone who was riding, and impulsively decided to join him. I was scared out of my mind, certain I would never be able to complete the ride, but too proud to back out. 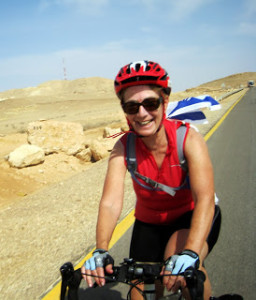 For me, the ride was not only a physical challenge but an emotional one as well. Other than the person whom I had just met who had inspired me to sign up, I knew no one. The only long distance ride I had done until that point was the 5 Boro NYC Ride with my son Jacob. I had never done anything like this in my life, and certainly not on my own! There were teams from large cities, and couples, and groups of friends, but I was the lone rider from Poughkeepsie. No team for me.

That first year was tough and exhilarating. It was a week of firsts for me. The first time I had ever ridden 70 miles in one day. The first time I had ever ridden long distances on multiple days. The first time in forever that I went on a trip of this nature on my own, without my husband. And, although I had lived in Israel for 4 years, been married there, given birth to my daughter there, and visited at least yearly since leaving in 1978, I had never, ever seen the country – especially the desert – from the seat of a bike. Why would I????

The 2013 Ride will be my fourth one. Every year I learn something more about bike riding and about Israel, her neighbors and the amazing Arava Institute. (I knew very little about riding that first year….I rode the 300 miles in Keen sandals! I wasn’t even up to using clip-in shoes yet.) In 2010 two friends from Poughkeepsie joined me, and one of them is returning this year. In 2012 I was older and wiser, felt less of a need to prove anything to anyone, and took advantage of more of the afternoon trips. This year, for the 2013 Ride, there will be eight – yes, eight – riders from Poughkeepsie, including my son Jacob! I hope my enthusiasm for the camaraderie, the terrain, and more than anything else the students and programs at the Arava Institute were the infectious catalysts for getting them to join me. I know they won’t be disappointed.

I have shlepped my bike back and forth from the States to Israel 3 times now. I think its time to assume I’ll be back again for another Israel Ride after this one and leave it there!

It’s not a race, it’s a ride……and a life changing experience.