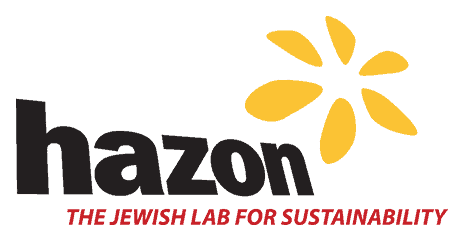 This week we were gratified to be listed in the Slingshot guide, the annual compilation of the most inspiring and innovative organizations and programs in the North American Jewish community. We’re proud to be one of only two groups (the other is Ikar, in LA) who have been in every Slingshot guide since inception.

So this is an exceptionally good moment to share with you a key challenge that we faced going into this year – and the answer we’ve come up with.

The challenge is that we do incredible work spanning many different areas, and yet we are faced with the same questions time and again:

Tell me again what you guys do?!
What’s your elevator pitch?
How do you explain Hazon??

It is and was a big problem because we do a lot of different things in the world. Our stakeholders – staff members, board members, donors, participants – have struggled with how to answer these questions.

So we brought in an outside consultant (the wonderful Scott Osman), and Amy Hannes, our Director of Marketing & Communications and I worked on this with a group of staff and layleaders. Scott conducted 17 interviews with 25 different stakeholders, averaging roughly an hour each, to ask people what they thought about Hazon and how they understood us.

And what they – we – came up with is… Hazon is the Jewish lab for sustainability.

Hazon is The Jewish Lab for Sustainability.

I went into this process with a strong sense that the challenge we faced was real and important, but with – to be honest – very little confidence that we’d manage to solve it. I felt that we’d always struggled with this “elevator pitch” question and I didn’t really believe we’d be able to crack this challenge.

But, in fact… I love this new tagline!

Particularly because it turns out that it is true – true of who we are, true of what we have done, true of the different programs that are part of Hazon, true of our values; true, even, in a deeper sense, of what we need to be, given our mission.

Because if your mission is – as ours is – “to create a healthier and more sustainable Jewish community, and a more sustainable world for all,” – and if what you’re trying to do is to turn Jewish life outwards, in order to have a significant impact in the wider world, and to strengthen Jewish life in the process, then it makes it sense that you would want to – that you would need to – do a wide range of things, for many different sorts of people, and in a great spread of locations. As we do.

As “The Jewish Lab for Sustainability”, since inception, we’ve experimented with a significant number of different ways of enabling the Jewish community to address sustainability more profoundly:

So to us the label seems honest and useful in describing who we are and what we do.

And, in addition, one of the ways we especially like this new way of languaging Hazon is that it helps to frame questions that we will try to address as we go into a strategic planning process (we hope) later this year. If we’re The Jewish Lab for Sustainability then – for instance – are there things we particularly should be growing? Or closing down? Or scaling further? What things that are not in our lab should be in it? What’s our business model? Are there are any things that could or should be spun out as independent projects, or held elsewhere?

It’s far too soon for us to answer these questions: right now we’re still at the earliest stage of framing them ourselves. But we really are the Jewish lab for sustainability; we believe that the Jewish community at this moment not only needs such an organization but that, actually, it needs potentially a much stronger and larger lab, capable of scaling things more quickly, supporting more experiments, utilizing more modalities, doing more research, supporting more great people. This is not because, as it were, “Hazon” is important, but rather because the issues we’re seeking to address are huge and salient and have traction. [Put a different way: if we were going to allocate the (let’s say) $50 billion of installed capital in the American Jewish community, I do not believe that anyone today in 2018 would say, oh, let’s put down 5,000 suburban synagogues… and one Hazon. ]

So…. we’re working hard. We’re in the early stages of working to rebuild Isabella Freedman. We’re growing our Israel programs. Hakhel – our incubator for emerging intentional communities – is well under way. We’re about to welcome our summer Adamahniks. We’re expanding Teva. We’re investing in our staff. We welcomed this week Merav Cohen, the new manager of our Hazon Seal of Sustainability program. And we have much money we need to raise, just to do the things we presently do, even before we think of adding others.

I want to end by returning to the Slingshot guide, and quoting something that Dr. Yehuda Kurtzer, the head of the Shalom Hartman Institute North America, wrote on Facebook. He said:

What do we mean by innovation when organizations are featured for 10+ years in a row? Are we to assume they are innovating all day every day; that the original concept was so innovative that it retains our attention as it endures; or something else? Isn’t this version of flashy innovation actually counterproductive to what some of these organizations need, which is to develop a more fixed foundation to ensure their stability? Where’s the “stability guide?” And if it becomes implausible to remove an organization for political reasons, is this an “innovation list” or just an alternate version of “the establishment?”

These are good and serious and helpful questions and Hazon stands, as it were, on both sides of them. I can’t speak for anyone else in Slingshot, but in our case we are innovating, if not every day, but certainly every week and every year. We have piloted and introduced and grown (and sometimes also closed or shrunk) new programs, every single year since 2000. We think that that is right and necessary to innovate and we think that process needs to continue – certainly in the JOFEE space, which is young and fast-growing and has, we believe, quite enormous opportunities to strengthen Jewish institutions, to touch people’s lives and to enable the Jewish community, as a community, to make a better world for all.

So to those of you who have helped us reach this point – as staffers, funders, teachers, board members, participants – thank you for helping to bring this lab into existence, and thank you for bringing to life so many great projects.