By Hazon on May 22, 2019 in Hazon Seal of Sustainability, Hazon Seal Spotlights

By Harriet Sepinwall and Mark Lipsy 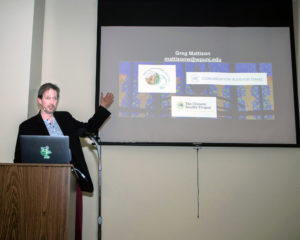 Someone said that “you could hear a pin drop” at the interfaith gathering for Tu B’Shevat at Congregation Agudath Israel held on January 24th.  Jointly planned and co-sponsored by CAI’s Environmental Committee, Interfaith Committee, and Education Department with Saint Aloysius Roman Catholic Church, the program “Climate Change:   Science, Realities, and Concerns – What Can We DO?”, attracted almost 100 attendees.

Coming together as a faith community, the program began with a display of the Biblical “7 species in the land of Israel” and an explanation of the significance of the wheat, barley, grapes, figs, pomegranates, olives, and honey.  CAI’s Rabbi Alan Silverstein described what the Torah, beginning with Bereisheit (Genesis), and Jewish sages have taught about the environment given to us and our need to care for it.   Saint Aloysius’ Msgr. Michael Desmond followed by citing biblical passages common to both faiths that impel us to care for the air, water, land, and all species of creation, and he also cited popes from Paul VI, to John Paul II, to Francis who stressed the obligation for us to protect our environmental for ourselves and future generations.

The speaker, Greg Mattison, from William Paterson University and a member of WPU’s Green Team and the Saint Aloysius Green Team, provided much to learn about climate change.  He focused on what we know, why we should care, and what we can do.  Citing the 10 year United States Government’s report, recently released (November, 2018) on climate change,  Mattison cited many examples of the worldwide concern about how climate change is impacting economics and health as well as causing major disruptions to life.

Providing statistics as well as still and video photos, Mattison made it clear that climate change is not a political issue, but is a major challenge for our time.  He noted that concerns of worldwide companies and governments have resulted in increases in research and production of alternative fuels, electric cars, and more.  He noted that because of enhanced use, the cost of solar panels is decreasing and becoming more affordable, and he cited countries that already are or are on their way to using only alternative energy such as wind power and/or solar panels.   He described how pollution of our seas and air and increased heat are having a major impact on the oceans, resulting in almost regular flooding in places such as Miami Beach, and how “extreme weather changes” all over the world can be seen with recent flooding on Bloomfield Avenue, and 5 degree temperature one day, and in the 50s the next day.  He pointed out that a U.S. Defense Department study had identified climate change as a cause of the increasing numbers of people migrating from their countries for reasons such as starvation (as their farm land has become a desert), and that these people can be referred to as “climate refugees”.  To those who say that weather always has been changing, he noted that the most extreme weather in all of history has taken place in 17 of the last 20 years. 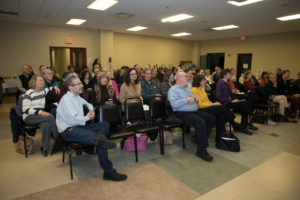 He closed by offering examples of what we could do as individuals and as a community, including in our local towns.  He pointed out the advantages seen with joint efforts of religious congregations and municipal governments to do “energy audits”, and he noted that many now are working together on joint purchases of environmentally friendly products and energy.  He noted the increased interest by companies, governments, and individuals in purchasing hybrid or all-electric cars, and said that this would help decrease costs.

People lingered after the program, not rushing off, but wanting to stay to talk.  Most filled out an evaluation indicating what they had gained from the program, what they would like to see happen as a follow-up to this program, and what they felt they could do to make a difference in our community as a result of what they had learned.  Attendees commented on the “knowledgeable presentation that left me with “hope”;  “desire to participate in advocacy trips to D.C. and Trenton”;  desire to “spread the word and meet with town officials about changes we can make”;  need to “continue to learn as much as I can and get the word out”;  “knowledge that the situation is very dire, but there are viable opportunities for change and improvement”;  desire to “vote and fight for causes that support sustainable energy”; “encourage programming in the community and disseminate information”;  “remain informed”;  “we must recognize the economics of our choices”; “though we may be small and may feel insignificant, we still can make an impact”; “a stable environment makes for a stable society”;  “need to do something together”; “it’s so important to try to change human behavior and make a difference to help save our planet”; “knowledge is power, and when we dream alone it remains a dream, but when we dream together, we can make a new reality”; “my next car will be a hybrid”;   “I now see that climate change is the single most important issue in our world as it affects every human being, every species of animal and plant species.” 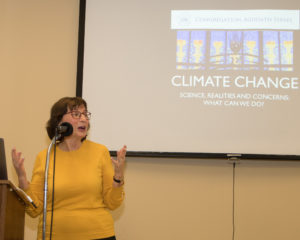 The CAI Environmental Committee was grateful for the opportunity to observe Tu B’Shevat by focusing on knowledge and insights from both religion and science, that impels all of us to work to help support sustainable practices, and the Committee looks forward to building on this collaborative program, working with other partners as we seek a more sustainable world for ourselves and future generations. 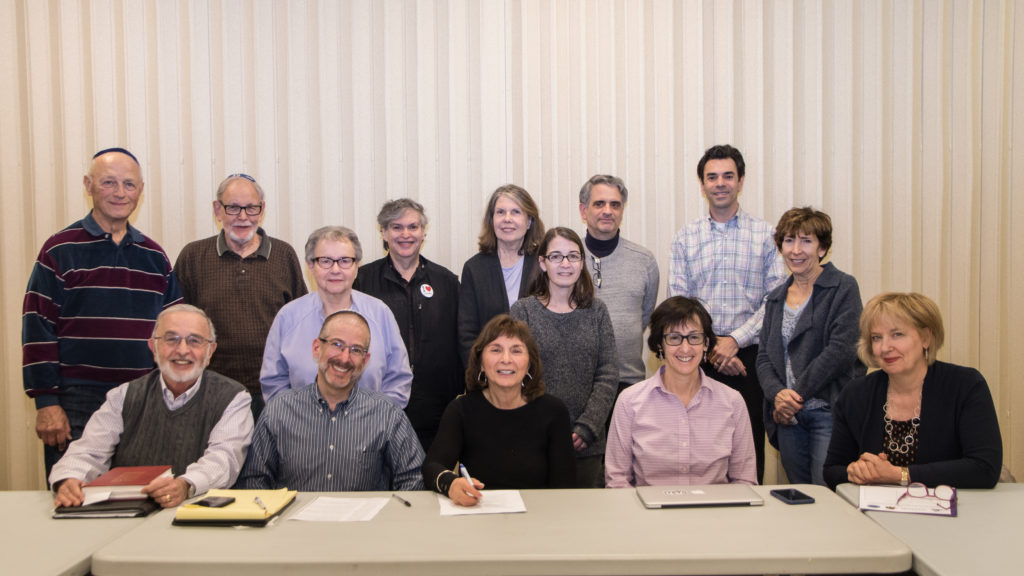 “Members who attended the CAI Environmental Committee meeting at which we shared the news that we were accepted into HAZON’s Seal of Sustainability program! See all the smiles! ” ~Harriet Sepinwall

Want to bring the Hazon Seal of Sustainability to your community? Learn how.

Where do we begin? The Hazon Food Conference
Making the Omer COUNT! Food Waste, Composting and more