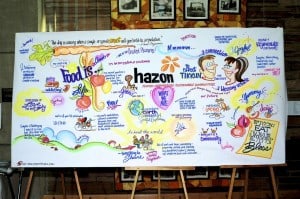 The first Hazon Rocky Mountain Jewish Food Summit, attended by 200, marked a leap in the Jewish Food Movement in Colorado. Jewish restauranteurs encouraged us all to be vocal about our food choices at restaurants, the Jewish Petition for a Just Farm Bill was signed by many, and we found out who has the best kugel in the west.