“Kafka… is one of the heroes of ‘Eating Animals.’ So is the philosopher Jacques Derrida, and a vegan theology professor named Aaron Gross.” 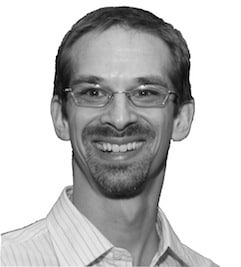 Aaron S. Gross, Ph.D. is the CEO of Farm Forward and has played a leadership role in a wide variety of national and international farmed animal welfare campaigns in the Americas, South Asia, and the Middle East since the mid-1990s. Gross also serves as a professor of Jewish Studies at the University of San Diego and co-chairs the American Academy of Religion’s Animals and Religion Consultation.

Seeing the need for an organization devoted specifically to creating alternatives to factory farming, Gross founded Farm Forward in 2006. Farm Forward has played a leading role in the promotion of alternative models of poultry production based on heritage genetics and its newsletter, facebook site, and twitter feed are followed by more than 15,000 individauls. John Mackey, Founder and CEO of Whole Foods, hails Farm Forward as “an important force for social change.” Bestselling Novelist Jonathan Safran Foer describes Gross as “a visionaryâ€”his founding of Farm Forward will be looked at by future generations as a turning point in the fight to end factory farming.”

Gross serves on the national board of the Society for Jewish Ethics and has been an advocate of greater attention to food and animal ethics in Jewish communities for two decades. He has been particularly active in efforts to improve kosher slaughter. According to animal welfare expert Temple Grandin, “Gross has played a critical role in improving kosher slaughter . . . his knowledge about both the Jewish and animal communities is invaluable.” He collaborated closely with Jonathan Safran Foer, a recipient of the National Jewish Book Award, on Foer’s international bestseller, Eating Animals, and is featured in the book. As Elizabeth Kolbert wrote in the New Yorker, “Kafka . . . is one of the heroes of ‘Eating Animals.’ So is the philosopher Jacques Derrida, and a vegan theology professor named Aaron Gross.”

Gross’s publications have appeared in The Central Conference of American Rabbis Journal, Shofar, Tikkun Magazine, and HuffingtonPost.com. Gross’s forthcoming edited volume, Animal Others and the Human Imagination, is due out in Spring 2012 with Columbia University Press.

Read more about Aaron Gross and other Featured Presenters at the 2011 Food Conference.

This Book Might Change Your Life
Kosher Chickens and You