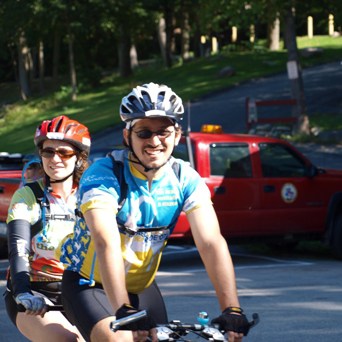 To all you seekers of spiritual community out there, I have one piece of advice. Do not limit your search to only traditional religious institutions. Do support your local synagogue, but also be aware that spiritual community comes in many forms. The Hazon community has become one of my spiritual homes.

For me, the term “spirituality” refers to when the different pieces of one’s life start to tell a coherent story that inspires action. The backbone of spiritual experience occurs when seemingly disconnected parts of my life begin to feel interconnectedâ€”what I like to call the “connecting of the dots;” when coincidence becomes impossible to ignore. This is only one limited explanation for a widely used elusive concept, but this “connecting of the dots” experience happens to define my relationship with the Hazon community, including how I first got involved.

In January of 2007, I was in the right place at the right time, which happened to be Boulder Colorado. Rabbi Tirzah Firestone was taking a two month Sabbatical from her congregation and asked me to take over while she was gone. The Boulder Jewish community is miraculously tight-knitted for a community with at least five different synagogues. Many people are members of more than one shul and they all share the JCC. The rabbis of the community gather together once a month in fellowship to discuss community wide matters and to support each other. I attended one of these meetings. There was literally a Reconstructionist, a Reform, a Conservative, a Renewal and an Orthodox rabbi all in attendance. Something right was going on over there.

When Rabbi Marc Soloway, a friend and the Rabbi of the Conservative shul in Boulder, told me that Nigel Savage from Hazon was coming to the Boulder JCC to speak about the possibilities of forming a team for the upcoming Israel ride, I was intrigued. I had heard of Hazon. Some friends and family of mine had done the New York and Israel rides before. Not necessarily a “bike person” I never really considered the ride myself. But that evening I heard three important pieces of information that would change my attitude: 1. The ride is religiously diverse; 2. The ride raises money for organizations that I already believe in and support such as the Arava Institute; 3. There is no greater way to experience the land of Israel than to bike through it. I had traveled from Jerusalem to Eilat many times, but never by the power of my own legs.

The timing of the Israel Ride could not have been more perfect for several reasons. I was already taking off a semester of rabbinical school and on my way back to Israel to prepare for my wedding in May, which was to take place in Jerusalem nine days after the ride. Both Olivia, my wife, and I were looking for motivation to get in good physical shape for our wedding. Although I was looking to do the ride, she was excited about the idea of training together. The downside of getting married in Israel is that many of my American friends and family would be unable to attend. The fundraising, which seemed daunting at the time, gave me an incredible opportunity to make my wedding more inclusive. On my fundraising homepage I assumed the new identity of the “wedding rider” and targeted everyone who couldn’t attend my wedding to support me. The opportunity to fundraising quickly transformed from burden to blessing. Not only was I learning an invaluable skill and enjoying it, but giving overseas family and friends a venue for making a contribution toward my wedding ride was a win-win.

It was an amazing convergence of improbability that an Israel Ride team from Boulder was forming in the two month period that I was there and heading to Israel immediately afterward. The fact that I would be invited to participate with Team Boulder for the ride in Israel nine days before my wedding was as if the universe was saying to me, “Ezra, thou must ride.” Needless to say, all of Team Boulder was invited to my wedding.

Of course the ride lived up to and beyond the hype. What I did not realize was how I would be transformed. Not into a serious biker, but into a serious hazonik. Hazon started to follow me-literally. A year and a half later I started my rabbinic fellowship at B’nai Jeshurun in New York City and during my first Shabbat there, I witnessed something I never saw before. Thirty people getting a group aliyah to Torah wearing their bike helmets. The rabbi then announced that these were the members of the BJ Revolutionaries Hazon team for the New York ride. Another dot connected. I immediately decided that I had to get that aliyah next year, so I joined the revolutionaries.

The following year I was asked to be the chair of the first ever Jewish life Committee for the 2010 New York ride. I was now in my second year of the Rabbinic fellowship at BJ. Through a series of coincidences I was able to spearhead bringing acclaimed author Jonathan Safran Foer to B’nai Jeshurun to speak about his new book, “Eating Animals.” It served as the kickoff event for the New York Ride. Shortly afterward the BJ CSA site began which I joined immediately. The dots never stopped connecting.

To say I believe in the work of Hazon is an understatement. Hazon is the embodiment of the spiritual community that I seek. When you volunteer with Hazon you are activated on many levels from the physical to the spiritual. I was activated as an organizer and as an environmental activist. But I was also activated as a spiritual seeker and a prayer leader. My skills as a fundraiser were sharpened. My fundamental attitude toward raising money and giving money matured. My eating habits have changed. I now consider myself a proud member of the food movement. I am more the person I want to be because of my work with Hazon. Go figure.

I grew up a camp person so I understand intimate spiritual community, but I also have a high bar. In order for Spiritual community to work it must demand active participation from its members. Hazon works because it brings the best out of its volunteers. So far it has brought the best out of me. There have been few communities in my life where I have felt like it was such a privilege to serve. I look forward to seeing where the next dot connects.

Reb Ezra Weinberg is excited to co-chair his first ride. He got his Hazon start with “Team Boulder” for the Israel Ride in 2007, ten days before his wedding to Olivia. In 2010, as a member of the BJ Revolutionaries, Ezra and Olivia did the NY Ride on a tandem bike. Ezra has spend the last year as the rabbi of Mishkan Ha’am, a reconstructionist community in Hastings-on-Hudson, NY. His life goal is to help bring the moshiach or peace to the Middle East, whichever comes first.

Why Jewish Environmentalism
Hazon in the News- March 2011